On this Memorial Day holiday, as we remember those who have given their lives in service to our country while protecting the freedoms and ideals we hold dear, many of our fellow Americans remain unaware of the major contributions Native Americans have made to our nation's armed forces. In fact, American Indians serve in their country's armed forces in greater numbers per capita than any other ethnic group, and they have served with distinction in every major conflict for over 200 years.

Best known are the Native American Code Talkers who served in World Wars I and II. Theirs is a remarkable story and their contributions were vital to our success, but there are countless other Native Americans who have served in the U.S. military who deserve recognition. According to the U.S. Department of Defense, as of 2012 there were over 22,000 American Indians and Alaska Natives on active duty, and the 2010 Census identified over 150,000 American Indian and Alaska Native veterans. 27 Native Americans have been awarded the Medal of Honor, the nation's highest military honor.

As the director of the National Museum of the American Indian and a citizen of the Pawnee Nation of Oklahoma, I've witnessed first-hand why Native Americans feel compelled to serve. I was raised with stories of friends and family members' bravery on the battlefield. Native Americans served in World War I even though they were not citizens of the United States. In fact, it was not until after World War II in the 1965 passage of the Voting Rights Act that all states were required to allow Native Americans to vote on the same basis as any other American. Despite decades of persecution and broken promises, despite being dispossessed of, and often forcibly removed from, their ancestral homelands, American Indians have served and continue to serve in our nation's armed forces in numbers that belie their small percentage of the American population. They step forward when duty calls. Now, let us on this Memorial Day support a memorial on the National Mall dedicated to the selfless service and patriotism of our Native American servicemen and women.

In December 2013, Congress passed legislation authorizing the National Museum of the American Indian, working with the National Congress of American Indians, to create a memorial on the grounds of the museum honoring Native American veterans. An advisory committee is being formed, with members representing Native veterans from across the United States and all branches of military service. Following a series of discussions with Native communities and veterans, a design competition will be conducted and a winning proposal selected.

I hope you agree the time has come to honor the extraordinary service, dedication, and patriotism of American Indian veterans with a National Native American Veterans' Memorial. 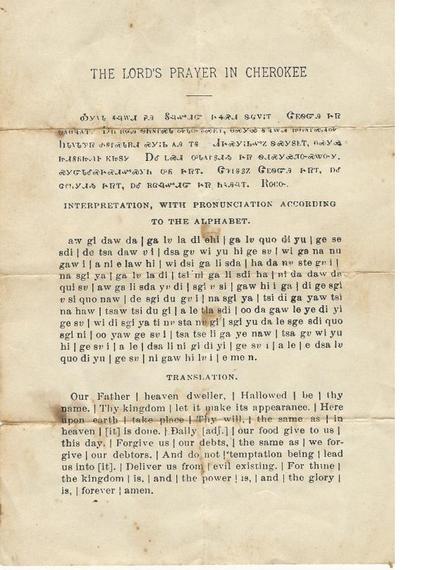 Image Caption: The late Woodrow Roach of Tahlequah, OK, fought for the U.S. Army from 1944-45 and believed the prayer to be his good luck charm while serving in Italy and the Philippines. The prayer is written in the Cherokee language syllabary as well as phonetically, as Roach was a citizen of the Cherokee Nation. It is now in the permanent collection of the National Museum of the American Indian in Washington, D.C