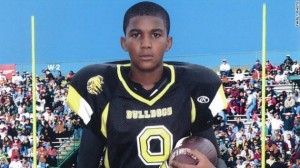 The story of Trayvon Martin is, first and foremost, a tragedy for his family, and our hearts go out to them. It's also about things that need to change, including how powerful interests use their superior resources to distort the processes of government -- in this case a well-funded private group, fueled by donations from big corporations: the American Legislative Exchange Council, or ALEC.

We want to know why major U.S. corporations support ALEC, which, working with the National Rifle Association, helped write and promote around the country the law that might allow Trayvon Martin's killer to go free. So on Monday morning, Republic Report, along with Color of Change, the Center for Media and Democracy, and Van Jones' organization, Rebuild the Dream, sent those companies a letter asking them to stop supporting and financing ALEC.

Many people believe that the large amounts of money that ALEC pours into state legislation hurt ordinary Americans on economic issues like workers rights, health, consumer protection, and the environment. People also are concerned about the effect on our democracy of ALEC's expensive amplifiers drowning out other voices in the debate. But you might also wonder why ALEC is dominating state legislative battles on issues like the right to vote and the use of lethal weapons. And although many of you won't be surprised that Koch Industries supports ALEC, you might ask why so many other major U.S. corporations like Wal-Mart, Kraft, AT&T, UPS, ExxonMobil, and State Farm sit on ALEC's Private Enterprise Board, and help fund these controversial efforts.

Here's our letter, sent to the 20 corporations on ALEC's board:

In 2005, the American Legislative Exchange Council adopted a model bill that was almost identical to Florida's "Stand Your Ground" law enacted earlier that year. The Florida legislators who introduced that act, Sen. Durell Peaden and Rep. Dennis Baxley, were, like your companies, members of ALEC.

ALEC has made this bill a priority, and numerous ALEC-affiliated state legislators have pushed it. These laws have been adopted in at least twenty more states.

ALEC has long been a central force behind state laws that harm the health and safety of Americans. Last year, it emerged that in 2009 ALEC had endorsed the model for state "Voter ID" laws, which make it harder for low-income people, communities of color, young people, the disabled and elderly, and others to vote, and ALEC legislators have sponsored those bills in numerous states. And now we know that ALEC backed the law that could let Trayvon Martin's killer walk free, the same law that risks more tragedies in the other states.

We call on your companies to stop supporting ALEC's reckless agenda, which harms the communities in which you do business.

On behalf of our organizations and members, we ask that you formally and publicly end your affiliation with, and your financial support for, the American Legislative Exchange Council, out of respect for Trayvon Martin and his family, and in the interest of making our country less violent and more united.

Please respond by contacting Suzanne Merkelson of United Republic at 202 / 299-0911, smerkelson@unitedrepublic.org, or the above mailing address. If we don't hear from you soon, we will follow up. Thank you in advance for your prompt attention to this matter.

The original version of this article appeared on Republic Report. Check that site this week to learn how you can take action -- Tell companies to Honor Trayvon, Quit Alec.