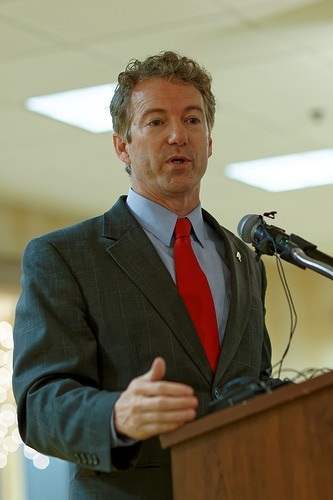 The American Medical Association (AMA) today distanced itself from Republican hopeful Rand Paul, offering its support to "anyone else interested in running for president. Anyone." Citing the ophthalmologist and senator from Kentucky's claim that vaccines can cause "profound mental disorders," the nation's largest association of physicians collectively banged their heads against the wall and sighed, reporting that this country would be better off getting their medical advice from a halfhearted Google search. "Dr. Paul's misinformed statements on the dangers of vaccination seem to suggest that we should use air quotes when calling him 'doctor,'" said an AMA spokesperson.

The AMA also pointed to Paul's assertion that the Ebola virus is "incredibly contagious" and could spread at a cocktail party as yet another reason for their lack of interest in showing support for his candidacy. "The CDC has reported that Ebola is spread through contact with blood or body fluids of someone with the virus, not by sneezing or coughing. Measles, on the other hand, is highly contagious, but also preventable through vaccines. The same vaccines Sen. Paul opposes. Fancy that."

Though Paul is, so far, the only physician to throw his hat into the ring, the AMA declared that this didn't automatically ensure their support. "We've seen television doctors with more knowledge of actual medicine than Rand Paul. Doogie Howser, House, McDreamy, even Dr. Nick from The Simpsons. These are all doctors that the AMA would proudly back. In other words, we would literally support a fictional person for president ahead of Rand Paul."

When asked to comment on the AMA's remarks, an aide to the campaign said Paul was busy preparing for his rebuttal by studying Medical Terminology for Dummies, "the beloved textbook that got the senator through medical school."