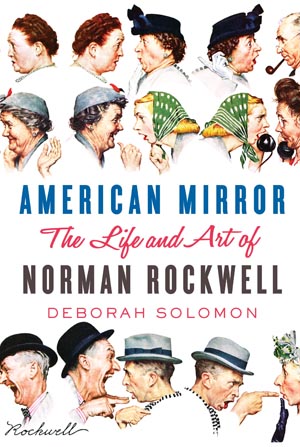 Last week Norman Rockwell's painting "Saying Grace" was sold for forty-six million dollars, the highest price ever paid for a painting by an American artist. As one who was fortunate enough to know Rockwell the man, and to have visited his home and studio on several occasions as guest and friend, I was pleased to see that his work is now valued highly, both aesthetically and commercially.

I can recall that he was extraordinarily kind to my young wife, and to me in the early 1950's. He lent us his Vermont cabin for our honeymoon and we enjoyed his company at meals, cocktails, and square dances. Thus I read this new "definitive" biography by Deborah Solomon with considerable interest, followed by deep disgust. This is a life seen through a distorting carnival glass mirror; one that replaces facts with a kind of Mad Hatter Freudianism that permeates the pages of what I found to be a truly shameless book. The Rockwell I knew was a decent, hardworking, modest man, dedicated to his art as an illustrator, and on a personal level loving his sons and his lovely, gentle, troubled wife Mary. That man is missing from these pages, replaced by a pathologically repressed fellow, totally self-absorbed, who never followed through on his secret homoerotic thoughts, but was -- in Ms. Solomon's lurid prose -- someone with pedophilic tendencies, something she hints at constantly with her verbal winks and sneers.

Since Ms. Solomon has no evidence for these criminal charges except her own overexcited imagination, I find this the intellectual mugging of a decent man, accusing him of the most indecent sexual desires towards children based solely upon the author's view of the paintings, and perhaps, the desire of the author and her publishers to make the kind of noise in the world which results in book sales. Where the devil were the fact checkers at her publisher who must share the blame with the author? It is fitting that the cover of this biography shows Rockwell's painting of the town gossips; a group enjoying the relaying of news of a scandalous nature, a painting for which Ms. Solomon might well have modeled.

Since Ms. Solomon never met Rockwell and draws most of her conclusions about him from her detailed, wrong-headed study of his paintings and her far-fetched interpretations of private documents, all interpreted to fit her thesis, I feel I have a certain advantage in having known the man and on occasion having seen the artist at work and at play. Repressed? Not the man I knew. I recall Norman taking my wife and me to a square dance at the Grange Hall in Arlington, VT and being regaled by his stories of the sexual adventures and misadventures of some of the dancers -- all told in the plainspoken, non-judgmental, yet wry and witty manner of a decidedly unrepressed man; a man who knew the world and the people in it and addressed it with a smile, as opposed to the sneer that Ms. Solomon brings to her prose.

This author suggests that Norman expressed his alleged homoerotic tendencies in his paintings (a homoeroticism that she alone sees) because he was a skinny boy who suffered from the scorn of others during his non-athletic youth, and that ultimately led to secret pedophile feelings revealed in his paintings of kids -- ignoring the fact that children were one of the favorite themes of the illustrators of the 1930's and 1940's. Shirley Temple and Mickey Rooney were the highest earning stars in the Depression years. This is not just viewing work out of its cultural context but it is psychologically unsound for more often it is the brawny, macho football coaches like Jerry Sandusky who molest children. If the subject of an artist's work reveals his or her hidden sexual preferences then I suppose Andy Warhol was a secret, repressed heterosexual for all those paintings of Marilyn and Jackie. If you follow Ms. Solomon's logic, Landseer the famous Victorian painter of dogs, and Rosa Bonheur the 19th century Frenchwoman who painted those mighty horses, must have been into bestiality.

She tells us in a hush-hush voice about the fishing trips that Norman enjoyed with men, and makes much of a humorous comment in his journal about one of the men looking fetching in his pajamas, which might well have been a joke about a guy in long johns. Since most fishing trips in the nineteen forties were made by groups of men, she misses once again the cultural context of Rockwell's life and world.

Over and over she looks at a painting and sees what nobody else could possibly see. We see a charming young girl on the threshold of adolescence looking at herself in the mirror wearing a fancy party dress; Solomon sees a tomboy with a boy's back because to Solomon Rockwell could not paint femininity, this despite the fact that he painted many attractive women. More egregiously, the open shirt on the stalwart man speaking out in the town hall in that famous "Freedom of Speech" painting is viewed as an object of hidden lust on the part of the artist. Ms. Solomon's desire to find what she is looking for -- something hidden in the beloved Americana of this artist -- overwhelms any critical judgment she has. If Norman painted a plate of spaghetti she would find a homoerotic tomato sauce on it.

Not having made a study of Rockwell's life I can only speak from my personal experience when I discover errors of fact in this book. I attended the wedding of Norman's son Tom to Gail Sudler and sat near Norman's wife Mary. Yes, Mary Rockwell had a problem with alcohol, as did so many in those days, but she was far from the noisy, disapproving drunk at the wedding we find in these pages -- rather, she was quiet and agreeable, very pleased that her son was marrying the girl he loved.

Gawker, the Internet blog that focuses on media and celebrities, wrote of Ms. Solomon's firing by the Times from her Q&A column, a column which elicited complaints that she had distorted their interviews from fellow journalists Tim Russert, Ira Glass, and Amy Dickinson. Gawker noted: "Her worst quality was her relentlessly sour disposition, often unredeemed by any wit or insight. And also how she often tended to waste precious interview space with these real important people by asking them questions that were basically about herself. And also how she used to dishonestly edit her column." Sadly, since the author spent years writing this book, I believe that she brings these same unfortunate qualities to her biography of Rockwell. For me, this book is more about the mind of Deborah Solomon than it is about the life of Norman Rockwell.

It cannot be a surprise that the Rockwell family who gave this woman their trust is now saddened by this vicious and distorted biography. They see what any careful reader will see, that the biographer elevates the art only to demean the man. The following is a statement recently issued by the Rockwell Family in response to American Mirror and I believe that this statement says it all.

"Ms. Solomon's book does not give a scholarly or factual account of Norman Rockwell's life and work. Rather she concocts a fictionalized life. In doing so, she attempts to falsify all that the Family and the world know about him. In unfounded claims of homosexuality, Ms. Solomon obsessively attempts to demonstrate her "logical" evolution to pedophilia with not a shred of evidence apart from her unsupportable conjectures. She consistently pretends to know how Norman Rockwell "felt" and what "impulses" he harbored when there is no basis for such speculation, in her book or elsewhere.

"The Rockwell Family fully cooperated with Ms. Solomon with complete transparency and trust in her quest to create the authoritative work on Norman Rockwell. Chronologically and factually, she seriously misinterprets, omits important material, makes many factual errors, and fictionalizes incidents. She noted in an online Wall Street Journal interview that she had been given a "treasure trove" of psychiatric records. In fact the Family shared with her only three short letters.

"Ms. Solomon's conclusions demand scrutiny. The Family now feels that her purpose in befriending us and writing this fictionalized account was publicity, financial gain and self-aggrandizement. We cannot allow totally unsupported allegations about Norman Rockwell with no supporting factual backup to live into perpetuity without correcting the record. We have no wish to interfere with Ms. Solomon's free speech right, but we must exercise our own to note that she has exercised her right irresponsibly."

Reader, pass this book by.