Some people collect stamps. Mark Michaelson, a graphic designer in Manhattan, prefers mugshots. Not just any old mug will do -- Michaelson’s 10,000-odd faces bear scars, weak chins, crooked teeth and cloche hats, visual details his trained eye can’t resist. They also reveal the warts of their era, as in the case of his first get, a young suspected stocking-stealer from 1938, described starkly in an attached arrest card as “a close mouthed Negro who is probably committing burglaries.”

“I see a lot of boring ones, and I’m not going for those,” Michaelson recently told The Huffington Post. “The ones you’re seeing are the best I’ve found. You get this feeling when you find them, like being an archaeologist, finding some relic that you’re able to identify as being special, and rescuing it, saving it.”

Michaelson started collecting in the mid-nineties, when eBay launched. Since 2005, he’s shared his scores, which come from markets on and offline (eBay is still his richest source), on his highly trafficked Flickr site, and in 2006, with a book and paired gallery show hosted by fellow mugshot collector Steven Kasher. Now Michaelson is analyzing his compulsion in “American Mugshot,” a documentary by a Toronto-based studio about how the mugshot -- a form of portraiture no one wants to pose for -- came to be art.

Michaelson, who makes a living as an art director for a book publisher, is a consultant on the film, as well as a subject. While he isn’t exactly a mugshot artist himself -- he mostly just shares his finds -- he’s become a welcome interloper. Soon after his book came out, he discovered that the French graffiti artist C215 was making giant stencils of the faces in his collection. Michaelson made contact and was soon in the underground cells of an English police station, exhibiting the originals at a joint show. In these circles, he's referred to by his Flickr username, “Least Wanted.”

“I’d put something up in Soho, and they’d say, ‘Oh, Least Wanted was here,’” Michaelson said. “Mugshots, you know -- they’re sexy. I sort of had instant street cred.”

The idea of repurposing mugshots as art isn’t new. Andy Warhol, whose series for the 1964 World’s Fair involved 13 massive silkscreen mugshots of the FBI’s most wanted people at the time, is one of Michaelson’s “obvious” influences. But Michaelson isn’t ambitious in the way of Warhol, more possessed.

“I think about it all the time,” he said. “It’s an obsession. It's like a drug. I’m still just as excited by my most recent acquisition as I was by the very first.”

Nearly every photo Michaelson posts on Flickr elicits a warm response from his followers, who often thank him for opening the curtain on a face and moment in time they wouldn’t have otherwise seen. Most latch onto the bizarre details that likely charmed Michaelson in the first place (“She was arrested in her apron?”). And then, schadenfreude may be part of the mix: the Kickstarter page for “American Mugshot,” which Michaelson helped launch this week, links Least Wanted’s resonance with our growing hunger for celebrity news, asking “How did the mug shot, originally a law enforcement tool, end up as tabloid fare, street art, and as part of the private art collections of the elite?”

To gaze at the unlucky faces is also a uniquely American pastime. In all Michaelson’s time hunting -- in European flea markets and online -- he’s never come across a mugshot in circulation that originated outside the U.S., where they are considered public property.

Indeed, Michaelson’s accidental side career may not have flourished in a different time or place. Warhol’s experiment with mugshots at the World's Fair “didn’t go over very well,” Michaelson pointed out. “He was forced to take them down.”

Head over to “American Mugshot”s Kickstarter page for more on the project, and click through some of our favorites from Michaelson’s Least Wanted collection below. We've included all the information he's been able to find on individual photographs, which is often not much. 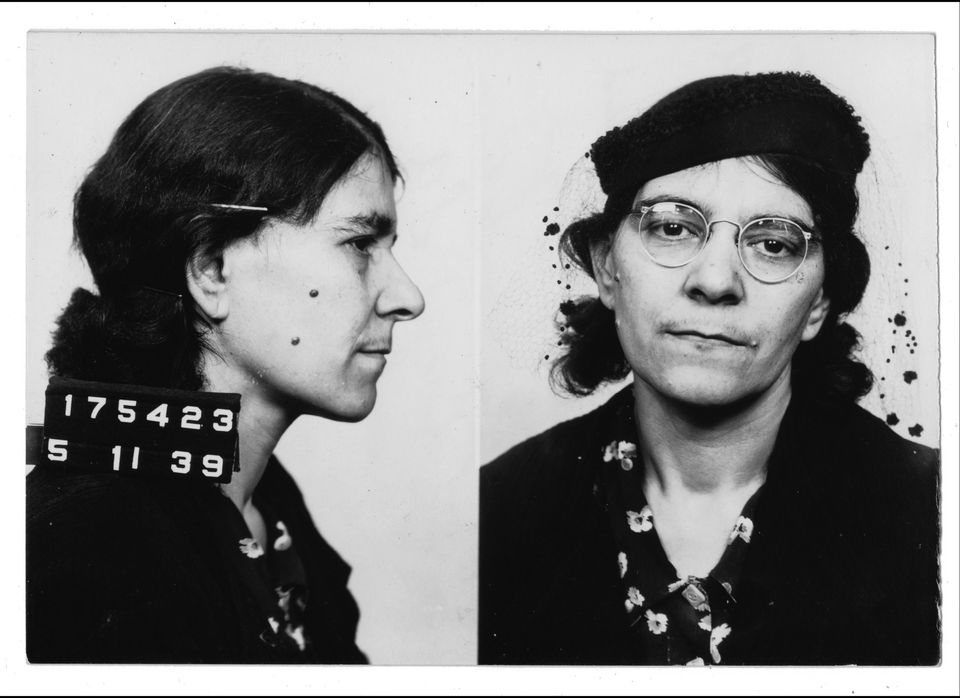