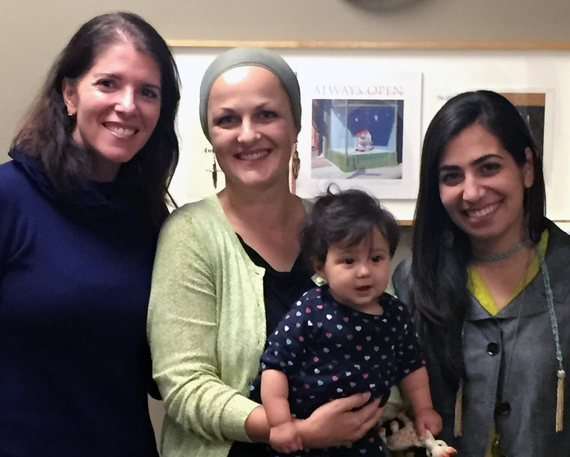 Pictured from left: Nadia Roumani, Edina Lekovic and her daughter, and Elica Vafaie.

"We need all Americans to be civically engaged. The issues we're all facing are too big for any of us to sit on the sidelines. We need get people out in the community, not just to the polls to vote or to run for elected office or attend environmental rallies, but to be inspired by their faith and pursue their passions. In order for us to do that, we need the funds to be able to invest in human development as well as policy change. Because both will ultimately move the needle of greater public understanding and civic engagement." - Edina Lekovic

I sat down with three extraordinary women leaders in the American Muslim community to discuss identity, charitable giving and civic engagement. I was seeking to better understand the needs of a community I knew little about. I wanted to understand the role philanthropy plays in their culture and the role philanthropy can play to integrate American Muslims into American civic life.

The California Community Foundation (CCF) has been working to build relationships and partner with the American Muslim community in Los Angeles County for the last several years. It is one of the most diverse populations, consisting of Arab, Middle Eastern, South Asian, African American, Latino and Asian Pacific Islanders, who contribute greatly our region.

Edina Lekovic is public affairs consultant at the Muslim Public Affairs Council (MPAC); Nadia Roumani is co-founder and director of the American Muslim Civic Leadership Institute (AMCLI) at the USC Center for Religion and Civic Culture and the Walter and Esther Hewlett Design Fellow with Stanford's Center on Philanthropy and Civil Society; and Elica Vafaie is project director of the One Los Angeles, One Nation initiative at CCF.

Each comes at her work from unique perspectives:

Edina, originally from Montenegro and raised Muslim, studied at UCLA, where she started on a spiritual journey after being exposed to young Muslims actively practicing their faith. "When I realized that what I understood about Islam growing up through film and television screens was not what I read in the Quran... it made me find an intersection between my spiritual life and my professional life."

Nadia, of Syrian descent, was working in international development when in 2004 she partnered with the USC Center for Religion and Civic Culture on a study on young Muslim Americans. This led her to doing interviews with Muslims across the country, many in Los Angeles: "It was a moment where I made a kind of personal shift, 'why am I doing all this international work when my own community is struggling in my backyard?' And in Islam there is this idea you help those closest to you, in your vicinity, and then you work your way outward. That was what led to launching AMCLI."

Elica is Iranian-American and has worked in diverse civil rights and social justice movements. Following the tragic events of 9/11, she worked on a variety of cases and issues involving the Arab, Middle Eastern, Muslim and South Asian (AMEMSA) communities, then came to CCF in 2012 to lead One Nation: "To me, it's about civil rights, leadership building, civic engagement and movement building. As an Iranian-American having worked in this space, I have a great deal of respect for the community work and leadership, trust and understanding."

The size and diversity of the American Muslim community is complicated to quantify. There are many estimates out there depending on the methodology and source, including Pew Research Center's 2.75 million American Muslims, which is generally considered to be a low figure; 500,000 estimated in Los Angeles, from the Council on American Islamic Relations; and 77 countries represented.

Unlike the Bay Area, New York and Chicago, there have been few philanthropic investments in Southern California, despite the size, strengths and needs of the population. Here's an excerpt from our interview on the topic of advice to the world of philanthropy to engage this community:

John: There are many foundations that aim to help the full complement of Americans. Yet, they are not aware of the opportunities to engage American Muslims. Until we did our research and outreach, I had no idea how important and underfunded this community has been. What's your advice to the philanthropic community about how to invest in and how to advance the American Muslim community and its needs?

Elica: Any foundation that has a mission to be responsive or inclusive of diverse, marginalized or vulnerable populations or that funds access, social justice or advancing rights, should be including and working with AMEMSA communities. They should be supported alongside other emerging and growing populations such as the Latino, API or the LGBTQ communities. One of the strengths of the One Nation Initiative has been to use a broad frame to the philanthropic work. Key organizations such as the ILM Foundation, Council on American-Islamic Relations-L.A., South Asian Network, AMCLI, etc. advanced a policy issue or leadership development or organizing that best fit their community base. Engaging the community in broad policy or broad civic engagement or education work is an opportunity most foundations can take.

Nadia: I would say, and not because we're sitting in this office, I would model CCF's approach to One Nation, because the truth is that most foundations are taking one of two approaches. One is a Countering Violent Extremism (CVE) or security lens, where you're basically saying civic engagement is the methodology for countering violent extremism. That lens sets up a troubling scenario where any non-civically-engaged Muslim is a potential terrorist threat. The second tends to look at us as an underleveraged pool of resources that can be brought into strategies that are already in place, but without thinking about the unique ways those issues impact this community. It's more about mobilizing them for their assets but not building their capacity in the long run. CCF took a different approach. They asked, how do you engage this community on the issues they have prioritized? How do we enable them to show up and shape the issues that matter to them as full participants, engaged, inspired and rooted in their unique faith experiences? And that takes time, it takes long-term investment, it takes capacity building, it takes a lot of patience. And the more that can be elevated as a model, I think it will show the amazing benefits versus doing it from one of these other two frames.

Edina: While I was initially more excited about project funding, what my lesson has been is that the capacity-building funds have gotten us further, because it gave us the ability to go through a strategic planning process that we hadn't been able to afford to do and it gave us a renewed ability to bring in development staff. Most of the organizations in our community are still at the capacity-building stage. So I think being willing to fund on that side and being able to work with organizations to bring them to the table.

Like everyone and every community, American Muslims should be asked, engaged and accepted. We get into habits and assumptions about our communities. Change creates gaps in our vision and knowledge. We have to re-learn, unlearn and discover what we do not know and who is left out of our work. We need to question stereotypes, media myths and our own biases. This is the heart of what I learned during our conversation. This is the core of the challenge for American Muslims.

As Edina exhorted, we need all facets of the community to be engaged if we have any chance for change and a stronger common good. Foundations should ask themselves: Who are we leaving out? Who is not included? Whose voice is lost in the conversation for change? What ideas are we losing?

We all lose if we do not engage all people who want to pursue their passions, their faiths and the American dream.