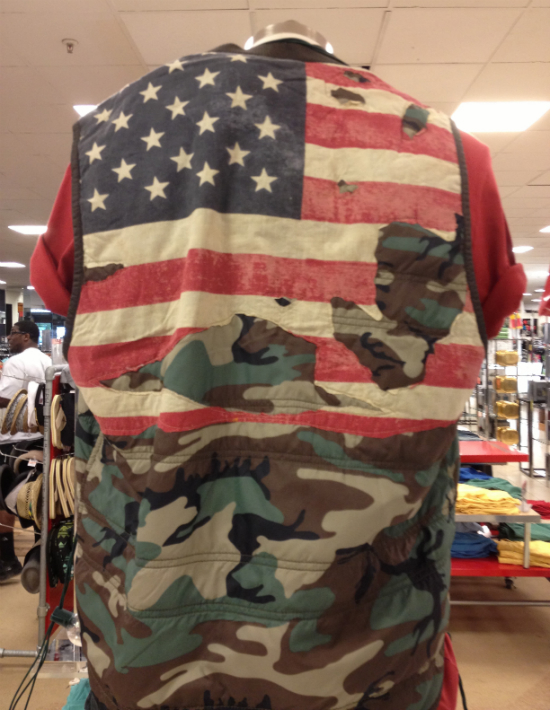 This image, captured in a Macy's Department Store, is a not-so-subtle appeal to American consumers' national pride (read nationalism) and respect for the military in a nation in which mindless mantras such as "Celebrate the USA," "United We Stand," and "We're Number One!" are commonplace. (Celebrate what, exactly? "United We Stand" against what, whom, and why? "We're Number One!," in what respects?, one is tempted to ask.) Perhaps nowhere in the world are national symbols -- the flag, its colors and the bald eagle -- more ubiquitous. The fawning over the military, the widespread use of the flag and various nationalistic rituals have catapulted the U.S. into a league of its own, especially in recent years.

This stark image depicts the bleeding of fatigues into the Stars and Stripes, powerfully symbolizing the erosion of patriotism, defined simply as "love for or devotion to one's country," and the ascendancy of nationalism, defined as loyalty and devotion to a nation; especially a sense of national consciousness exalting one nation above all others and placing primary emphasis on promotion of its culture and interests as opposed to those of other nations or supranational groups. The assumption that "others" wish to be like "us," and, by extension, the desire to mold them in our image, by force, if necessary, is the essence of the brand of missionary nationalism that has shaped U.S. foreign policy for generations.

According to anecdotal and survey evidence, the majority of Americans are nationalists and support -- enthusiastically or tacitly -- policies that promote missionary nationalism. This, it seems to me, is the elephant in the room of the international education profession, of which I am a member, especially in the U.S.: so painfully obvious, so demanding of our attention, yet so utterly neglected. Global citizenship education, if carried to its logical conclusion, would enable young people's intellectual landscape, moral compass and sense of connectedness to extend to all of humanity, and contribute in some small way to a more peaceful, just and equitable world. Is anyone listening?