ST. LOUIS (RNS) American nuns facing a Vatican takeover of their leadership organization on Friday (Aug. 10) rejected Rome's plans to recast the group in a more conservative mold, but declined -- for now -- to respond with an ultimatum that could have created an unprecedented schism between the sisters and the hierarchy.

Instead, the nuns said they wanted to pursue a negotiated solution to the showdown that has galvanized American Catholics in recent months and prompted an outpouring of support for the sisters that left the Vatican with a black eye.

The statement from the Leadership Conference of Women Religious came at the end of the LCWR's annual assembly here and was the first formal response to the Vatican from the entire organization, which represents most of the 56,000 nuns in the U.S.

The Vatican announced in April that it was assigning a team of bishops to take control of the LCWR in order to make the organization -- and by extension, most U.S. nuns -- hew more closely and publicly to orthodox teachings on sexuality and theology.

Sister Pat Farrell, the outgoing president of the LCWR, on Friday read the official response that expressed the organization's "deep disappointment" with Rome's verdict. But the statement also said the nuns wanted to keep talking with the hierarchy in hopes of "creating more possibilities for the laity and, particularly for women, to have a voice in the church."

"Dialogue on doctrine is not going to be our starting point," Farrell told reporters.

Farrell added, however, that the sisters will reconsider their options if the LCWR "is forced to compromise the integrity of its mission." That indicated that if the Vatican does not relent on at least some of its plans to revamp the organization, the sisters could make good on the threat to disband the LCWR and reorganize it as an independent body beyond the reach of the Vatican.

The sisters' pointed but measured response seemed to reflect the approach that Farrell outlined in a powerful address on Friday morning to the 900 sisters gathered here. Her talk detailed the nuns' public "struggle to balance our life on the periphery with fidelity to the center."

Farrell spoke of how the sisters have historically been committed to serving the poor and marginalized as well as to pushing boundaries within the church. That sometimes led to suppression by the hierarchy, she said, but also to sainthood for many nuns, and to far reaching changes that have benefited Catholics as a whole.

Farrell invoked an array of images to describe the role of religious communities then and now, including that of the lightning rod that "draws the charge to itself, channels and grounds it, providing protection."

Farrell's point, and one that seemed to emerge with growing force over several days of contemplation and deliberation, was that the sisters could not continue to expand the church's frontiers on behalf of lay people and others if they placed themselves beyond the institutional church.

"There is an inherent existential tension between the complementary roles of hierarchy and religious (the nuns) which is not likely to change," Farrell told the sisters. "In an ideal ecclesial world, the different roles are held in creative tension, with mutual respect and appreciation, in an environment of open dialogue, for the building up of the whole church."

Stating the obvious, she said the Vatican's mandate over the LCWR "suggests that we are not currently living in an ideal ecclesial world."

The next crucial step in the process will come on Saturday, when the LCWR board is set to meet for two hours with Seattle Archbishop J. Peter Sartain, the head of a three-bishop team appointed by Rome to oversee the overhaul of the LCWR over the next five years.

That will mark the first official meeting between Sartain and the nuns since the Vatican takeover was announced. Several LCWR leaders said they hope to establish a relationship -- if not yet a rapport -- that would reduce frictions and lead to a lower-key and perhaps more fruitful dialogue, for the nuns at least.

Sartain is viewed as an approachable bishop who could help steer both sides toward a mutually acceptable resolution.

The nuns have enjoyed a "groundswell of support," as Farrell noted, since the Vatican edict was announced. There have been online campaigns and vigils of solidarity with the sisters across the country, and the LCWR scattered hundreds of letters of prayer and encouragement on the tables in the huge hall where the nuns have been meeting since Tuesday.

Even as some nuns spoke openly about the sense of anger they felt when the Vatican takeover was announced, Farrell and other influential voices pushed the LCWR members to stick with the process.

Sister Donna Markham, a Dominican nun and health care executive, said that after the Vatican takeover was announced in April she felt "extremely, extremely hurt. I felt betrayed by my own church. It took everything in me to go to Mass."

But she said the priest's words of encouragement to the nuns in his homily that day prompted a standing ovation from the congregation.

"We were in tears. It was the strength of the laity at that moment that made it possible for us to walk through this time," said Markham. "It's been one of the most powerful experiences I've had in my entire religious life, and that's 40 years." 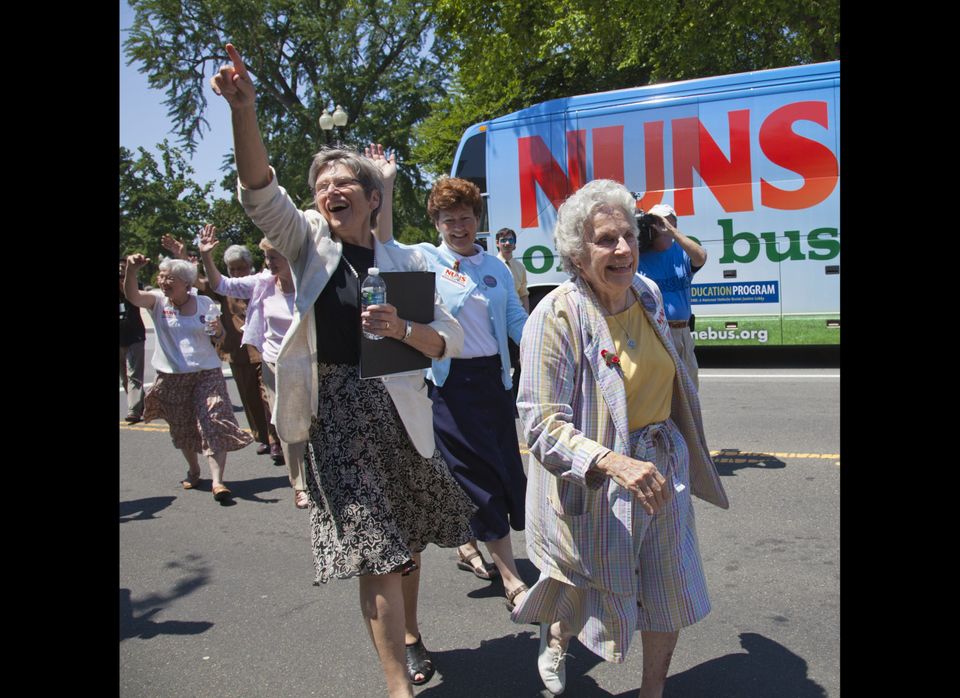