The actual retail price of the Bush Wars: $1.6 trillion, according to a congressional report released yesterday. And this generation of (civilian) Americans has never been asked to sacrifice a single damn thing in order to help ameliorate the cost of these historically expensive war efforts.

In this transcontinental Chinese buffet called America, we don't dig sacrifice anymore. Too effete. Too liberal. We prefer tax cuts for the super rich. We prefer our tax-deductible SUVs and all the gasoline we can bong.

Somehow, according to the most-excellent marketing strategies of Roger Ailes and Karl Rove, it's more patriotic to go around saying you're patriotic than it actually is to be patriotic. The most trenchant right-wing tools among us are proud and grateful to receive the president's unpatriotic and irresponsible rich-man welfare checks during a time of war. In fact, President Bush yesterday listed his tax cuts for the super-rich as one of his successes, while later in the day he accused the Democrats of spending like teenagers with a new credit card.

The Democrats. Spending. Like teenagers. Okay, compared to whom, Mr. President? And yet today the Wall Street Journal -- the economic newspaper of record -- had the old-man nards to editorialize that opponents of the president are insane.

That's rich. The president's ideologically-driven policies have bankrupted America, both financially and morally, and you and I are insane for being vocal about it?

Here's the real insanity. As the American economy falls to pieces, oil is hovering in the $100 per barrel range and gas prices are a few days away from shattering all-time high records. Forecasters are predicting that gas will surpass $3.22 per gallon by next week. Mad Money's Jim Cramer told Chris Matthews last week that gas prices might top $4 per gallon within the next six weeks.

Even with this brutal economic news to serve as an incentive, will Michelle Malkin, Bill O'Reilly, Rush Limbaugh and their ilk sacrifice for the war effort by purchasing less Islamofascist gasoline for their Ford F-150 Microphalluses? No way. Too moonbatty. Devising new and hilariously clever agitprop words like "Defeatocrats" is clearly more patriotic than actually addressing the principal source of global and domestic instability: oil and gasoline. 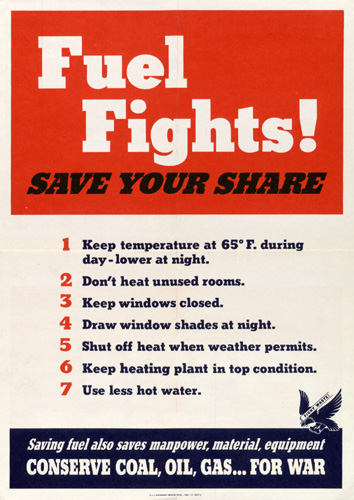 During World War II, to which the Bush Wars have been falsely compared by everyone wingnut-shaped, your government created posters urging conservation of gasoline for the good of the war effort. The messages were simple: using gasoline for your meaningless bullshit meant less gasoline for the boys in Europe and the Pacific.

It was the patriotic thing to do.

Everyone knew that the war would have to be financed somehow and we all had to pull together in order to make it happen. That meant universal military service, higher taxes, especially for rich people, and it meant buying less gasoline -- several ideals which Limbaugh, Hannity and the rest flat out refuse to endorse, even though they endorse the Bush Wars.

Today, it's unpatriotic to criticize the war and the president, they say. Finance the evildoers and the national debt all you want, though -- just step your secular progressive ass away from the poor defenseless president, you seditious bastard you. 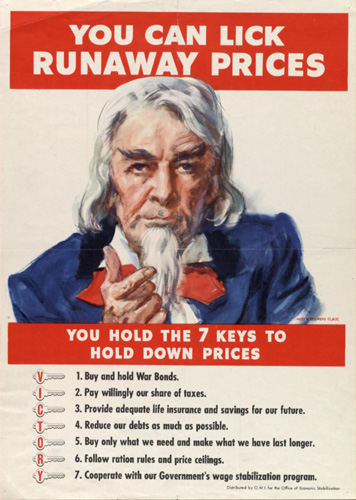 On his perfectly-sane-and-centered show the other night, Bill O'Reilly said that Mark Cuban, Dallas Mavericks owner and financier of the anti-war movie Redacted, would have been incarcerated by FDR and pummeled by General Patton during World War II for financing an anti-war movie.

Yet I wonder how Bill O'Reilly spent his Bush administration war-time welfare check? The world's most lathered falafel perhaps?

Nothing says "support the troops" quite like Bill O'Reilly handing over portions of his tax cut to OPEC while our soldiers are being killed by Iranian weapons. I wonder what percentage of O'Reilly's crude oil consumption has financed Iran's Revolutionary Guard this week alone. No doubt he inexplicably continues to buy middle eastern crude even though Mr. O'Reilly once said:

"You know, in a sane world, every country would unite against Iran and blow it off the face of the earth. That would be the sane thing to do, just go in and remove the government, because this is a terrorist state."

Iran is an OPEC nation, Mr. O'Reilly. You give money to OPEC whenever you travel inside your armored Paranoia Motorcade. But Mark Cuban is with the evildoers... for financing a movie? He's the insane one, according to the Wall Street Journal?

Shared sacrifice, common sense and a little bit of healthy idealism are all aspects of the American spirit which are in short supply today. And while we can't single-handedly repeal the president's unpatriotic welfare program right this very minute, we can employ a little sacrifice, common sense and idealism in order to immediately and directly influence how our money is spent.

We can simply buy less gas. We can carpool, walk, ride a bike or trade in our SUVs for more fuel efficient vehicles. We should do this, of course, not to support or dissent against the Bush Wars. We should do this because the alternative is unimaginable: more military casualties; future wars over a dwindling oil supply; millions of deaths due to the impending climate crisis; and the financial and social sacrifices our children and grandchildren will be forced to make as the result of our present selfishness.

It's never easy, but we can do this, I think, until we have some real leadership in America; leaders who will appeal to the American spirit instead of reducing the true meaning of sacrifice and patriotism to the level of myopic FOX News crusades and awesomely thoughtful internet videos.