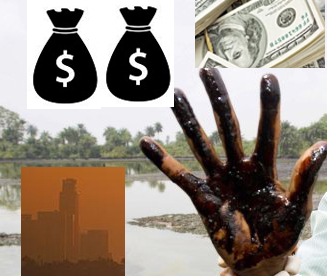 In a move that seems ripe for a John Oliver comedy segment, the American Petroleum Institute (API) has taken to radio, print, television, and social media to blanket Americans with the concept that our air is just fine the way it is -- more specifically, that ozone pollution doesn't require any further regulation.

They are disseminating a series of ads (one can only imagine what it cost to underwrite) that have an Orwellian quality about them. I could actually visualize the various focus groups they called in to come up with their strategy, determining how best to push hot buttons through key words and phraseology.

There's a lot of psychology at work, and a lot of conflation. The American Petroleum Institute is suggesting that the bigger our economy, the cleaner our air will be (Guess they haven't visited China or India.) They present the premise that along with population and economic growth, as well as the amount of energy consumed, the quality of air has improved in tandem.

Using statistics from the Environmental Protection Agency to illustrate the drop of ozone levels since 2000, the reasoning put forth is that the standards currently in place are doing the job and should be left alone.

To counter any doubts, they play the "economy card," maintaining that the country "can't afford unnecessary rules," that the regulations would be the most expensive to date, and that it would be a risk to jobs growth. The top talking point that they are hoping will pack a punch is that the proposed Obama administration directives "could" cost families $2,040 annually. The print ad uses the patriotic colors or red, white, and blue to get their message across.

The website, Ozone Facts, is referenced for further information. The "About" page leads back to the American Petroleum Institute. "Energy Tomorrow" is a project of the API. It's all about the oil and natural gas industry.

One of the quotes begins, "Reviews of air quality standards should be based on scientific analysis and conclusions, but too often EPA embraces an obvious politicization of the air quality standard-setting process..." This is situated almost directly across from a box on the left hand side of the page titled, "What they are saying." This leads to quotes from Sen. James Inhofe (R-OK) and Rep. Fred Upton (R-MI).

For those unfamiliar with the records of both men, additional perspective is needed. Inhofe is an avowed climate denier who now chairs the Senate Environmental and Public Works Committee (EPW). Upton is on record as having called the EPA's Clean Power Plan "a train wreck." According to the League of Conservation Voters, Inhofe has a 5 percent lifetime score on environmental issues; Upton has 29 percent. For the year 2014, they score 0 percent and 6 percent, respectively.

A chart on "Ozone Facts" that shows "Air Quality Progress" in the country since 1980, with ozone second on the list of "common pollutants." The major problem is that there is no context.

Nowhere is there any mention of the health risks that are at the core of the EPA's initiatives. Does the average citizen know that smog is basically ground-level ozone that has mixed with particle pollution and other gases? A photograph of a city enveloped in smog is visceral. It's easy to draw the lines between a soupy haze and the fact that human respiratory systems can be impacted in a major way. Difficulty breathing, coughing, and throat irritation are all caused by ground-level ozone -- which also affects the most vulnerable populations of children, the elderly, and those with asthma.

A graph on the EPA ozone website page shows a triangle divided into five sections, depicting the "pyramid of effects caused by ozone." At the top, in red, is an area labeled "death." It sits atop the layer devoted to "emergency room visits and hospital admissions."

The thirty-two second TV spot put out by IAP shows a clear blue sky and features a voice-over by a woman earnestly intoning, "But bureaucrats want to change the current rules safeguarding public health, risking jobs and threatening the economy."

Cue the Sen. Barbara Boxer quote, "If you can't breathe, you can't work." She has always stressed, "Clean air is essential for a strong economy."

Chirping birds, a love of crisp air, a blow to the lifestyle of families (who look like they came out of Leave It To Beaver), and job loss. The television ad closes with the tag line, "Don't' mess with success. Don't change the strict ozone standards."

Don Draper would be proud. He also would also have figured out a way to eliminate the all caps tag line, "PAID FOR BY THE AMERICAN PETROLEUM INSTITUTE."

This article originally appeared on the site Moms Clean Airforce