Americans are being spied on, but does anyone care?

We all know that the American government (specifically the National Security Agency and the FBI) is reading our emails, listening to our calls and watching what we look at online. Apparently we don't care enough to do anything about it.

The Pew Research Center surveyed 475 U.S. adults between November and January about their views on privacy and discovered that Americans (thankfully) know that government surveillance exists. Almost nine out of 10 people surveyed said that they have heard something about government surveillance. Fifty-six percent said they have heard "a little" about it and 31 percent have heard "a lot," according to Pew's survey, released Monday.

Pew asked the 87 percent of people who said they were aware of government surveillance if they had changed their behavior to protect their own privacy, and only 34 percent of people said they had taken any action. Of those who have made a change, here's what they've changed: 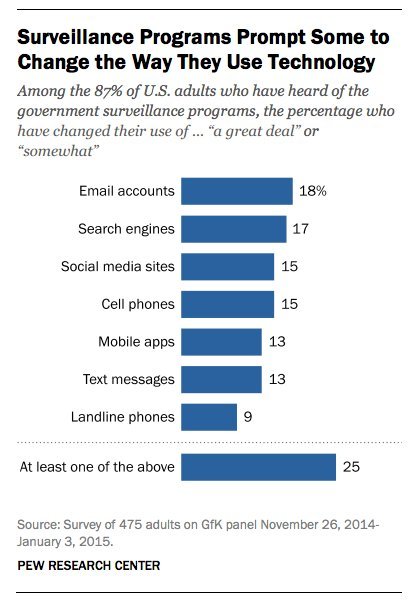 Twenty-five percent of Americans aware of surveillance programs are now using complex passwords, according to the survey. Pew asked people if they had adopted a few specific tools to combat government spying, and people generally said that they hadn't considered taking those steps. Fifty-three percent said they have not used or considered using a safer search engine, 46 percent aren't using an email encryption system and 40 percent haven't considered using anonymous software like Tor. Thirty-nine percent have never even heard of Tor. (For the uninitiated, Tor is a free software and network of servers that lets you browse the Internet without being tracked.)

So why are so few people taking actions to protect themselves? First of all, they aren't all that worried about being watched, as you can see in this chart from Pew: 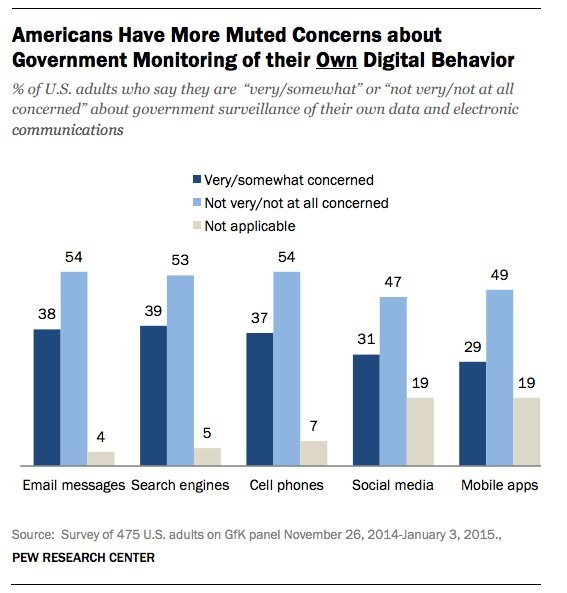 Another reason people are leaving themselves vulnerable is that they are intimidated by these anonymity tools. Fifty-four percent of people said that they think it would be difficult to find ways to protect their privacy online, according to Pew.

If we know one thing, it's that people are lazy about security. As of 2013, around half of iPhone users weren't locking their phones with 4-digit codes. Plus, the most popular passwords every year are always ridiculously simple. The most-used password of 2014 was "123456," followed by "password" and "12345."

Looks like there's an opportunity here for a simple privacy tool to swoop in and give some people peace of mind.