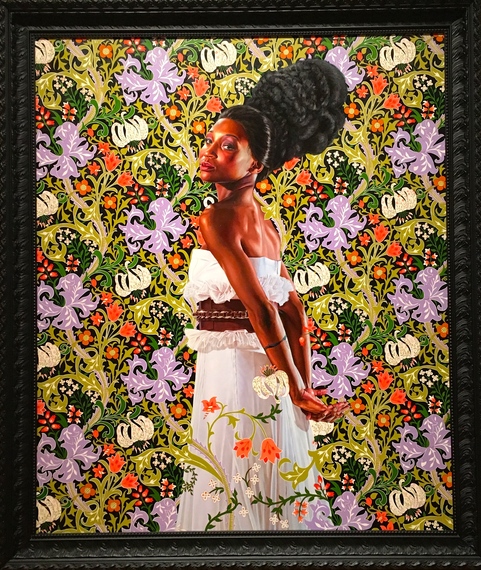 I'm insecure about art. I don't know enough to be an art snob. But I don't want to be thought of as someone who doesn't know kitsch when it's staring at her. So I wasn't sure what to think of Kehinde Wiley. His paintings are meant to startle, in his own words "go for the jugular." His colors and patterns are bold. His subject's postures and expressions are intense. His realistic paintings are larger than life.

When I saw his show at the Seattle Art Museum, I was captivated. His subjects, all people of color, gaze out at the viewer. "Look at me," they demand. "Don't accept what white society says about us." They're not screaming, but they're not subtle either.

Wiley stops people he finds walking on city streets. He casts them in paintings derived from the great portraiture of the 15th through early 20th centuries. The originals, created by artists like Gainsborough, Singer Sargent and Chassériau, depicted royalty, aristocrats, people of great power, wealth and prestige.

Most of his models are men. For his grouping "Economy of Grace," Wiley focused on black women he had recruited in Harlem. He dresses his models in long flowing gowns by Givenchy. Their hair is styled in up-dos that suggest elaborate crowns. He positions them to mimic the poses of the originals. Maybe because of Wiley's naturalistic style, they look better, more real, than the originals. They are self-possessed and regal, but at the same time, Wiley doesn't hide their vulnerability and humanity.

For a moment in time, he takes his subjects out of the reality of their lives and elevates them from the ordinary to the majestic, from people with no power to people of nobility, from anonymous to celebrated. It's not just the clothing, it's their inner beauty that Wiley captures. We don't normally think of his subjects as royalty. But in their newfound settings, on the imposing large-scale canvases, they command our respect and admiration.

Does changing the context of a person change the way we view them? How we treat them? We make assumptions about people by the way they look, the clothes they wear, their backgrounds. We take our preconceived notions and marginalize "the others" -- be it people of color, or people from another country or people with disabilities.

My daughter, Ariela, used a wheelchair. Her hands waved and her head bobbed. I know that people judged her by the way she looked, whatever they knew about disability forming their opinions. "Poor dear", they'd say, giving her a narrative that wasn't hers. We don't normally think of people with disabilities as royalty, but that's how she thought of herself.

I can't dismiss Wiley's work. He has too much to say about how we think of each other. He challenges our preconceptions about identity and art. With his reimagined light and landscapes, his subjects come alive and deserve our thoughtful attention.