No, it's not Hawaii. This is American Samoa, and you've kind of been ignoring it.

American Samoa is an unincorporated U.S. territory comprised of the eastern part of the Samoan island chain, southwest of Hawaii. Whereas the country of Samoa gained its independence from New Zealand in 1962, the U.S. has had claim to the islands of American Samoa since the early 1900s. Travel experts call the islands "vastly underrated" -- and indeed, it's strange that tourists have yet to overrun this Pacific paradise.

In American Samoa, you'll find lively tropical villages that together are home to just 55,000 residents. There's a volcanic crater, a 3,000-foot mountain and a rainforest burgeoning with birds. The waters around the island chain are populated by about 961 species of fish and over 260 species of coral, according to a spokesperson for the National Park of American Samoa. A stunning beach is on an island the locals call Ofu.

We call the whole place paradise. 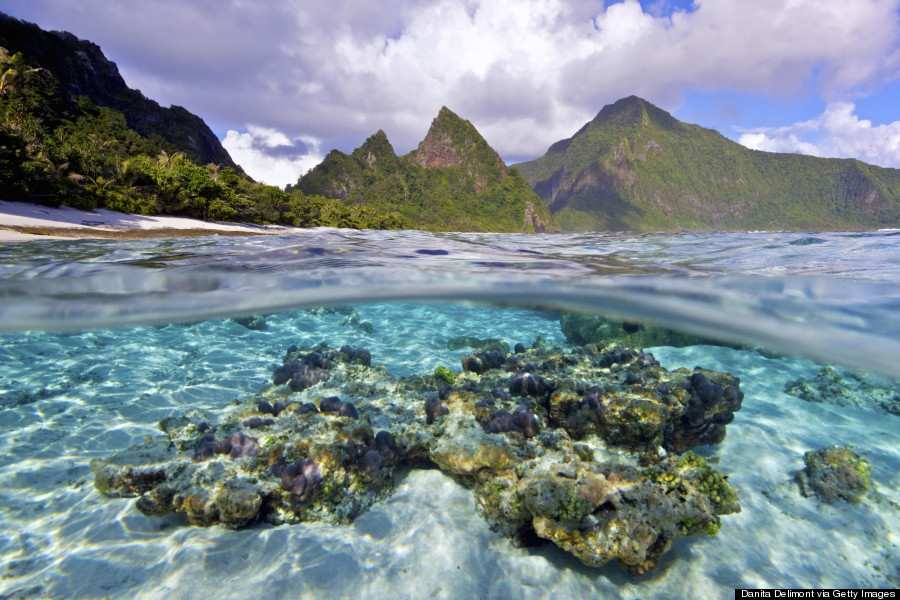 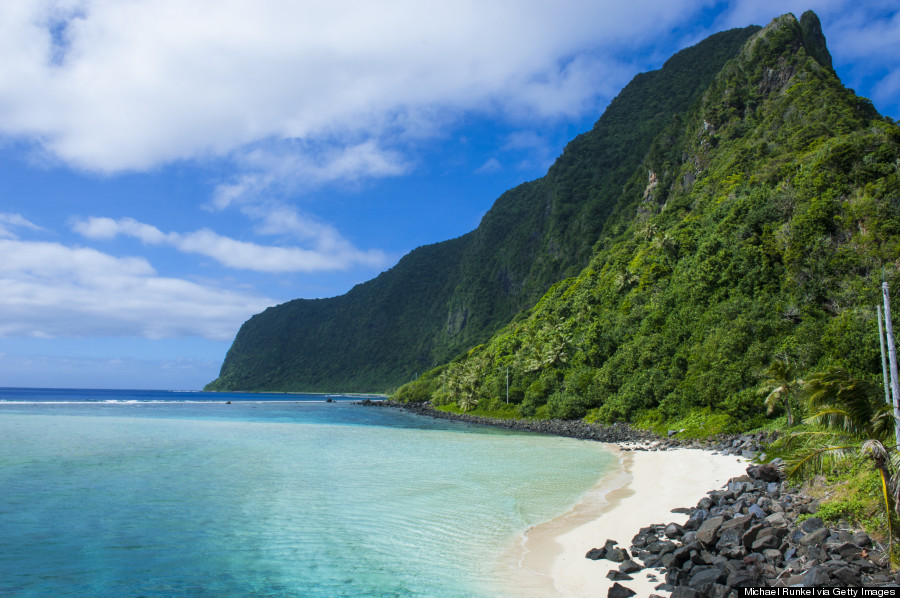 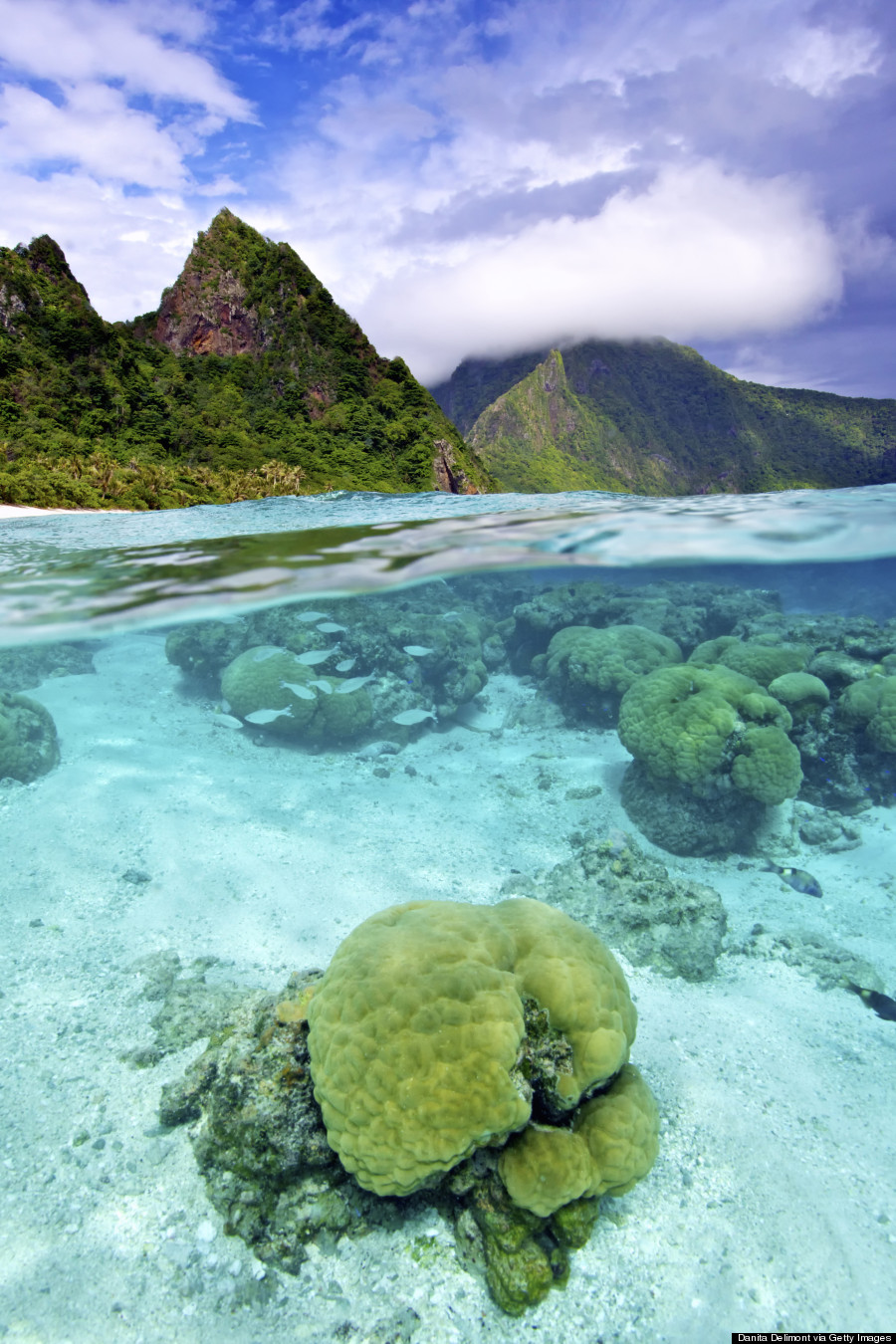 Islet of the Manu'a Islands Group 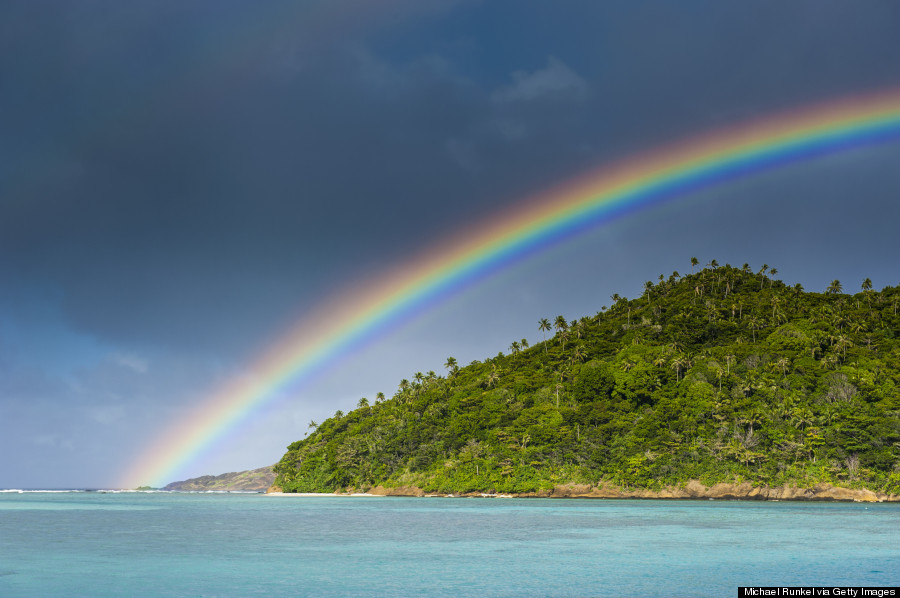 American Samoa's capital, Pago Pago, gets the most rainfall of any harbor in the world thanks to nearby Rainmaker, a 1,700-foot mountain of volcanic rock where fluffy clouds come to gather.

Savor the view from a canoe, hike to a mountaintop at sunset, go to a traditional dance show, or sleep over with an island family in the National Park of American Samoa. A handful of charming B&Bs, hotels and condos also await on Tutuila, the main island.

About a seven-hour boat ride whisks you to the even more remote Manu'a island chain -- this is the sacred spot where tribal chiefs officially signed their portion of Samoa over to the U.S. in 1904. Here, three islands contain American Samoa's tallest mountain and two family-run hotels. Ofu Beach, with its white sand and treasure trove of hiking trails, is known as one of the best "undiscovered" beaches on Earth.

...and we can only hope it stays that way, because American Samoa is too perfect to share. For being so remote, it's fairly easy to get to -- the easiest way is to fly through Hawaii or stop by on a cruise. You'll need a passport, but not a visa... and we're more than happy to stay a while. 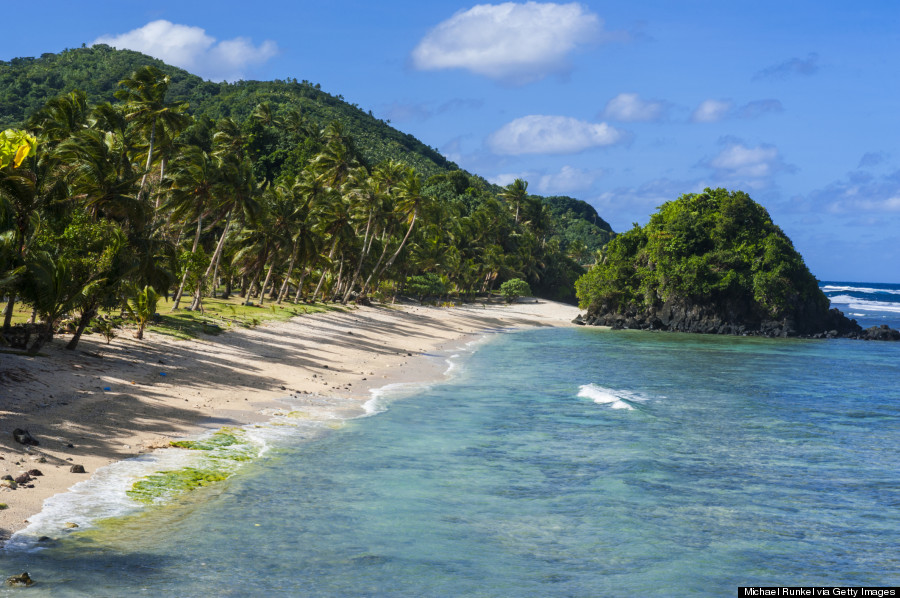 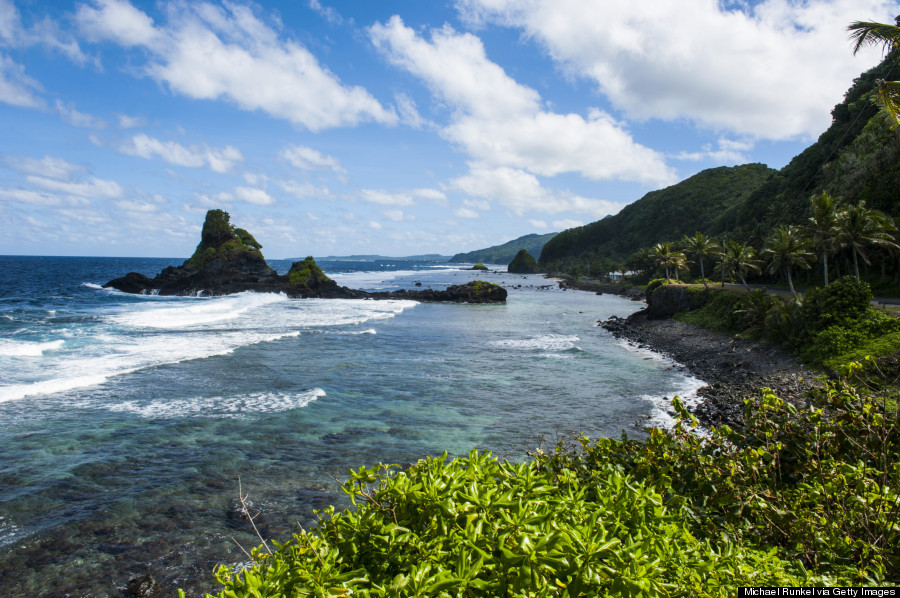 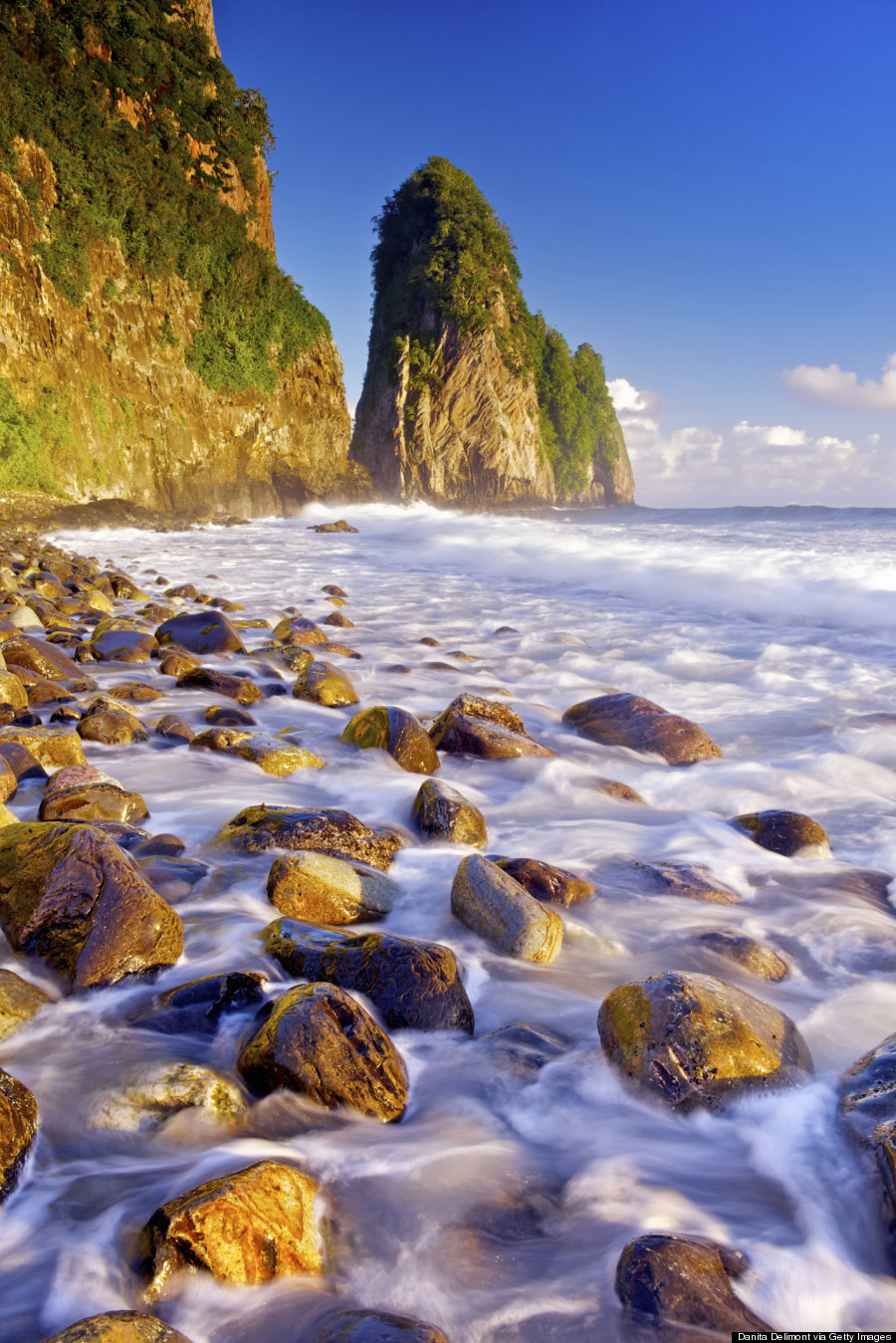 CORRECTION: A previous version of this post stated that the boat ride from Tutuila to Manu'a took about half an hour. In fact, the trip takes between six and eight hours. This post has also been updated with the official number of current marine life species.

SEYCHELLES 100.0 OUR FAVORITE: Anse Source d’Argent on La Digue THE LOOK: Dazzling white sand, huge granite boulders, cerulean water, and swaying palm trees. It would be harder to imagine a more perfect paradise. TOP TIP: Come late in the day to avoid day-trippers, beat the heat, and take a stroll around historic L’Union Estate (home to giant land turtles).
MALDIVES 98.5 OUR FAVORITE: Your own THE LOOK: With over 1,000 small islands in 26 atolls there’s no "best" beach here—they’re all gorgeous, and the crystal clear waters of the Indian Ocean are home to some of the world’s most colorful tropical marine life. TOP TIP: Pick your island resort wisely—some are so small you might feel too "Crusoe," while others have overwater bungalows so far from land it’s akin to being at sea.
GRENADINES 93.9 OUR FAVORITE: Saltwhistle Bay, Mayreau THE LOOK: Two perfect strands of sand, one facing a calm bay, the other the Atlantic. It’s the best of both worlds. TOP TIP: Getting here has become easier, with nonstop flights from the U.S. to Barbados and frequent puddle jumpers to the St. Vincent and a handful of Grenadines.
ANGUILLA 90.8 OUR FAVORITE: Shoal Bay West THE LOOK: A mile of soft sand with views of neighboring St. Martin and the distant, dramatic silhouette of little-visited Saba. Not to be confused with much busier Shoal Bay East. TOP TIP: Watch for the gravel, left-hand turn-off at the end of West End road. Good snorkeling at the very west end of the beach in and around underwater rocks.
BERMUDA 89.5 OUR FAVORITE: Elbow Beach THE LOOK: Pink sand, naturally, but quieter than other beaches on this blessed island—though one of the closest to the city of Hamilton. TOP TIP: Best spot to throw down your towel is via the public access path at the end of Tribe Road #4 between the Elbow Beach and Coco Reef resorts.
BORA BORA, FRENCH POLYNESIA 89.5 OUR FAVORITE: Motu Tapu THE LOOK: A tiny, uninhabited island in the western half of the lagoon from which views across a million shades of blue water are complimented by a full panorama of the main island’s dramatic green mountains. TOP TIP: Arrange for a private boat and picnic (through your resort) a few days in advance—weekends can actually be quieter, when the majority of vacationers are departing the South Seas.
BRITISH VIRGIN ISLANDS 89.0 OUR FAVORITE: Sandy Spit & Green Cay (near Tortola) THE LOOK: Miniature islands, encircled by sand with excellent snorkeling and 360-degree views of neighboring islands. TOP TIP: Rent a dinghy in Great Harbour, Jost Van Dyke—but only on calm days unless you’re up for a soaking and tricky landing.
TURKS & CAICOS 88.7 OUR FAVORITE: Long Bay Beach, Providenciales THE LOOK: Surrounded by the world’s third largest barrier reef, all of the beaches here are protected from ocean surges and most are completely waveless. Long Bay is one of the least developed. TOP TIP: Arrange for a private, guided horseback ride on the beach (and into the water) with Provo Ponies—they’ll pick you up and drop you off from your resort.
MOOREA, FRENCH POLYNESIA 88.3 OUR FAVORITE: Temae THE LOOK: Renowned for its jagged mountains and lush, jungle valleys, beaches here are on the smaller side and often attached to single resorts—all but quiet Temae on the northeastern coast. TOP TIP: Hop a taxi to the Sofitel resort and walk the long stretch of beach all the way to and from airport.
ST. BARTHS 87.2 OUR FAVORITE: Salines THE LOOK: Hidden from a small parking lot overlooking the salt basin, and accessed only up and down a rocky/sandy trail, of all the beautiful beaches on St. Barts this one is by far the most laid-back.v TOP TIP: Bring supplies if you intend to spend the day—but keep an eye on hungry goats looking for your fancy French picnic in the surrounding hills. More on Island Travel: The 12 Top Scenic Islands in the World The Best International Beach Resorts Best U.S. Islands For Beaches
More:
Travel Tipsamerican samoaDestinationsTravel Nextsamoa