In a climate primed to fear and hate Muslims, a bold stance is being taking against Islamophobia via the movie industry. Albeit not marketed or distributed by a well-established studio house such as Lionsgate or the Weinstein Company, the attempt by the newly formed Halalywood Entertainment to bring wholesome films suitable for viewing by Muslims & their families to the big screen is noteworthy. 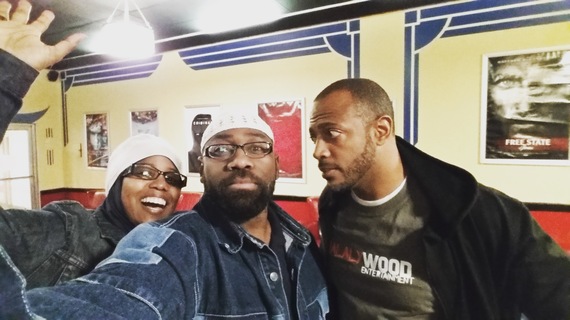 A few weeks ago, my husband Rufus and I was specially invited by the writer, director, promoter, Facebook friend, star of the movie and founder of Halalywood, Omar Regan, to attend the private screening of American Sharia in Atlanta. Atlanta boasts an active and diverse Muslim Community where support of Muslim projects are part of the norm. Stepping out on a Saturday night to the Plaza Theater in Midtown Atlanta was the perfect location and safe outing for singles, couples and families. 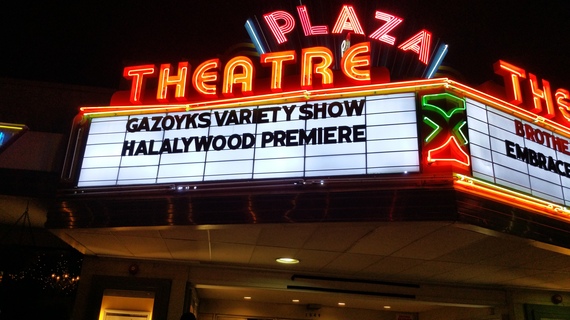 Regan was surrounded by a few family members relocated from his humble beginnings in Detroit and childhood friends from his visits to the city over the years when his parents were cultivating his growth in Islam. Also amongst the crowd were world renowned Imams, spoken word artists, filmmakers, and a few actors from the movie. Counie Young, a major benefactor in support of the movie and its success, flew in just for the premiere and an array of people that wanted to show their love and support for something that Muslims can call their own rounded out the audience. It was like the coming out of FUBU, for us by us. 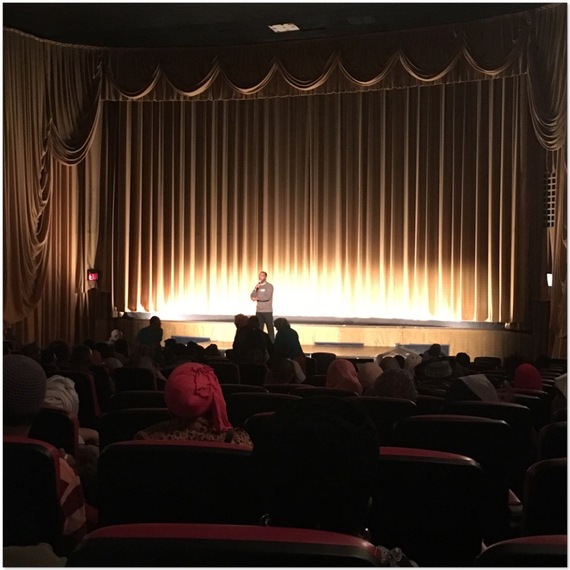 Regan, Chris Tucker's body double in Rush Hour, greeted the crowd and broke the ice by chronicling his troubled jihad of the soul in Hollywood. As black actors have a hard time finding comparable roles, being Black and Muslim is even harder as Muslims are challenged with bit parts that contain scenes that disagree with Islam. Although you can put Islam aside and make a decent living in Hollywood, or as Regan likes to term it "haram liked," it's much harder to stay devout and stay working. Regan told the back story of the movie, how he made it happen with only $90,000 dollars, how he is still in debt and how this has been a true learning experience that he will take into his next five movies.

And now, it's show time folks. With any movie, advertisements, sponsorships and product placements are to be expected. It should be expected even moreso in ones with low budgets as it is used an avenue to get funded. With American Sharia, it starts out with a placement from SingleMuslim.com which causes the audience to erupt in laughter. The struggle to get married in the Muslim Community is real. The conversation about how to go about it, is it a halal or haram way by posting and trolling single Muslim websites, that's something that you would just have to be Muslim to understand. Certain things connect us no matter race, ethnicity or religion, and finding a life companion is one of those things. While the commercial brought low decimal chuckles, it was a tasteful and respectful placement. Somebody has to pay for this movie. Product placements are good business.

Anticipating comedy and action from the highly promoted trailer, the movie starts out upbeat. Putting together Regan, the lead character Mo, short for Muhammad, with his active life as a cop and life as a Muslim, we see him running to prayer. Depending on where you live and where you work, trying to make salats (prayers) in the Masjid (mosque) is a struggle. Prayer is covered in several ways in the movie. Finding a proper, secure place to pray in the workplace is an issue that Muslims deal with time and time again. We also see a cop on the beat finding himself angry with a suspect and stopping to pray in order to calm down while the suspect runs away. Another cop on the force knows that Mo is Muslim and states that he needs to pray more in order to show cops in solidarity with Muslims. Mo's new partner, played by Baba Ali, gets much respect by praying openly in the workplace and another cop on an open investigation stops everything to pray. Prayer is serious business in Islam but there is humor between practicing Muslims in the times that we choose to do it and the places that we try or want to do it. Understanding the why and the when is part of the humor.

The plot of the movie covers the real life issues in which Muslims are dealing with domestically and internationally. Granting the movie entangles a plethora of controversy, the ones that are apparent are the ones that you see grace the headlines almost daily. Corrupt police offers, corrupt police system, corruption in politics, disunity in the Ummah (the total Muslim Community) and activism being construed as terrorism, especially in an election year, are timely topics. Even though the majority of the actors were new first time actors, there were a few significant performances. Regan's veteran acting experience carries the movie. His internal struggle with the murder of his father, a well-known Imam in Detroit in real life, and the grief that causes you to question who you are and your faith, is highlighted in his journey. Infused almost improv like comedy from Sgt Jackson, played by lyricist Quadir Lateef, the yes man to the police chief, was fun to watch. Social Media standouts, such as YouTube stars Yaz the Spaz, Adam Saleh and Sheik Akbar, account for several of the lead roles, with a notable cameo role by Muslim comedian Preacher Moss, best known for Allah Made Me Funny. The role of the political office seeking police chief is played by Joshua Salaam, of international recording group Native Deen. 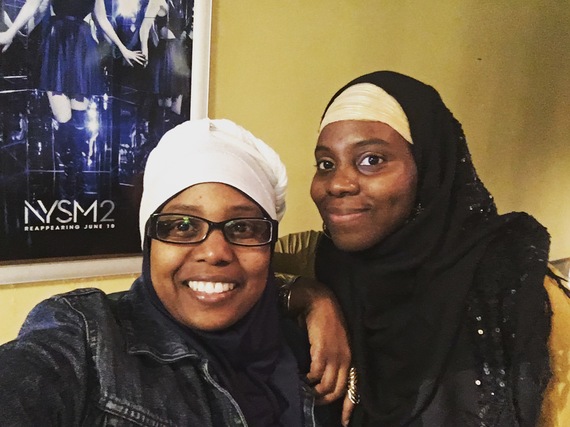 Eric Roberts, Julia Roberts's brother and accomplished Hollywood veteran, puts his believable stamp on the role of the crooked police officer that is harassing and profiling Muslims. As a seasoned actor his role lifted and supported some of the smaller lesser known in the ensemble. Not giving away too many spoilers, Roberts coincidently ends up in jail with a Muslim cellmate. It is obligatory for Muslims to give Dawah, educate and engage others in Islam, and his ignorance is made clear in a scene many Muslims have experienced discussing Jesus.

This situational city, Muslim Anywhere USA, addresses the meats and potatoes as to what is keeping Americans and Muslims in turmoil. More education and understanding is needed as to how Muslims live their everyday lives. More living like the Prophet Muhammad (saw) is needed when dealing Muslim to Muslim. There is a joke in the movie about the Community, Ummah, being one. Mo states "until one of us tries to marry one of their daughters." That's a true statement. Cross cultures and discrimination is just as much of a problem in Muslim marriages as it is in interracial marriages.

Regan stated at the beginning of the film that there are 20 pages of the script missing due to lack of budget. Even with the omission of several scenes, the movie is entertaining and uplifting to the point where you want to see what more is coming out of the Halalywood camp. The movie has already screened in multiple countries including Australia, the UK, Canada and Trinidad. Slowly making its rounds to more U.S. cities, the movie shows great promise.

There is good and bad in everything. The majority of this is all good. There are no sex scenes, half naked people, profanity or haram activities in the movie. The only bad or rather disappointing part from this outing was that the Atlanta Community, as diverse as it may be, did not show out in diversity for this screening. It was primarily African American Muslims who came to support the effort. More unity starts with change. Change can only come from people willing to move their feet and meet half way. As someone who knows about the lack of support, American Sharia goes to the heart and core of the discrimination that continues the division between not only Muslims, but Americans as well. 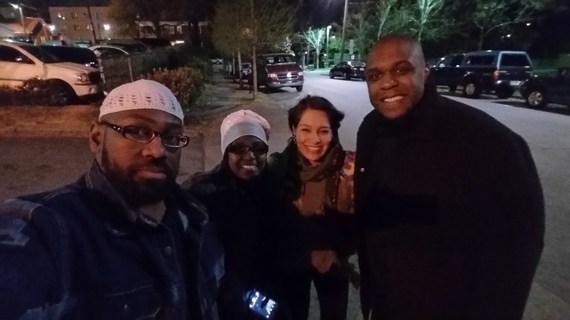 While our lifestyle is not one that is understood by all, and while we crave images that represents and reflect us where we can spend our monies, talk is cheap. Movie making and film funding is not cheap. When Hollywood starts to see us show up in droves to projects that are in our best interest, that's when change happens. Until then, keep fighting the good fight Omar Regan and the team at Halalywood Entertainment. Not bad for a first time effort. If I had to grade it, knowing the complete story behind it, I'd give it a B-. May your next movie be on the billboards of Hollywood and the best of cinematographers be in your budget.

If you'd like to catch a private screening of the movie, American Sharia rolls into Philadelphia's Pearl Theater, Thursday, April 21 at 8pm. You can also catch it at The Cannes Film Festival this year. Reach out to Omar Regan at Or@omarregan.com