This well-produced but flawed bio/war/drama follows the armed forces career and subsequent malaise of ex-Navy Seal Chris Kyle. He was a legendary sniper who did four tours of duty in Iraq. His steely, icy demeanor gave him a steady aim, but didn't protect him from the fragile aftermath of war, particularly Post Traumatic Stress Disorder (PTSD). The film fluctuates between his achievements in battle and his ordeal back at home. 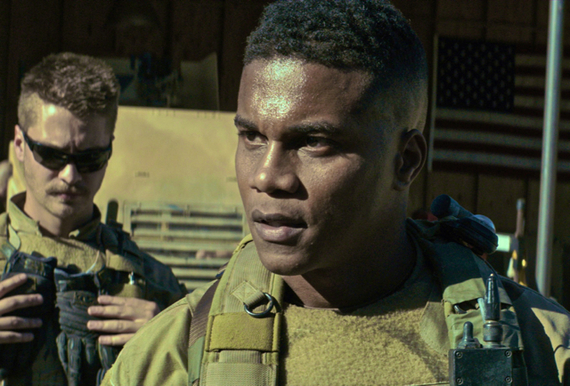 Telling Kyle's story is the purview of filmmaker Clint Eastwood who directed Flags of Our Fathers and Letters From Iwo Jima, and is well-acquainted with the war film genre. As was the case with those aforementioned films, Eastwood's style is never climactic. He prefers a moderate pace and a straightforward style that doesn't add anything new to the game. Helicopters buzz over Iraq. Soldiers on both sides of the battle are killed. But nothing stands out and everything appears routine, considering it's war. The proceedings lack the verve and staccato pacing that made Katherine Bigelow's Zero Dark Thirty a jaw-dropping experience. His languishing, overly choreographed and pat approach makes the footage feel flat and undistinguished.

After a grueling training, Chris Kyle (Bradley Cooper) becomes a Navy Seal sniper. A sharp shooter as a kid, his skill peaks in Iraq where, he can protect platoons by accurately shooting a hostile target from as far away as a football field. Deadeye? The man kills 160 insurgents. When fellow soldiers praise him, Kyle is never less then humble. His subdued demeanor is the exact opposite of the anger and rage he incites from enemy forces who put a price on his head. No wonder they call him "Legend."

Kyle's Navy Seals, who've teamed up with brave Marines, find something to focus on in the helter skelter war. It's the demonic Al Qaeda terrorist Abu Musab al-Zarqawi and his maniacal partner The Butcher (Mido Hamada); the latter tortures victims and snitches with power drills. As Kyle and his crew hone in on the new enemies, a sharpshooter, whose talents rival Kyle's, scopes them out. Mustafa (Sammy Sheik), a Syrian sniper, has Kyle and his men in his crosshairs. First one to pull the trigger wins.

The script by Jason Hall, based on the bestselling autobiography by the real Chris Kyle with Scott McEwen and Jim DeFelice, has plenty of slow, forward motion. When things get too tense, the plotline throws in a flashback for relief. Kyle meeting his soon-to-be-wife Taya (Sienna Miller) in a bar, trips back home on leave, the birth of two sons, phone calls from the front lines; these mini-scenes flesh out the imperfect human man behind the perfect aim -- to varied affect. You get a vague sense of the soul of this heroic soldier who tries to balance a dangerous existence with an infrequent family life. But it's hard to feel compassion for him. He's too strong a man. If the story followed a weaker person, perhaps a less successful marksman trying to prove himself with a save-the-day shot, he'd be a more compelling protagonist. As is, there's an emotional shield around Kyle that is impenetrable, even as he descends into a living hell: "It's not the people you saved that you remember. It's the ones you couldn't save. Those are the faces and situations that stay with you forever."

Bradley Cooper's performances are not known for their range. He lacks the emotional wallop and elasticity of a Christian Bale. He's okay as the goof in the Hangover series. He stumbled across a golden opportunity with Silver Linings Playbook and turned that part, as en ex-mental patient with a bipolar disorder, into the role of a lifetime. However, he does nothing to get you under the skin of Chris Kyle. Nothing. He packed on weight for the role, but that girth isn't a substitute for an intuitive or gifted character interpretation.

Sienna Miller, in only glimpses as the reluctant girlfriend turned into the concerned wife/mother, shows more depth and proves far more capable of cementing her dutiful and increasingly alarmed spouse persona. She is Kyle's only beacon out of his darkness. She is believable. Ben Reed as Wayne Kyle, the weaker younger brother, acts the part; never as strong, smart or good as his sibling. Sammy Sheik (Lone Survivor and TV's 24) as the stealth shooter Mustafa rarely speaks but powerfully commands the screen. Luke Grimes (Taken 2) and Cory Hardrict (Gran Torino) play young buck soldiers with a very credible G.I. swagger.

Tom Stern's (Changeling) cinematography, Joel Cox (Unforgiven) and Gary Roach's editing, and the production design by Charisse Cardenas and James J. Murakami (Changeling) make the visuals impressionable. If the film has any air of realism, it's because of their contributions. Clint Eastwood composed "Taya's Theme," the main theme music, which enhances the film in the right places. His taste in music is impeccable.

There will be better films that explore PSTD. They'll be better if they focus on a sympathetic soldier and not a cold-blooded killer. They'll be better if a filmmaker with more vigor and innovation directs them. Also, if you see this film and walk out the theater feeling like you just watched 134 minutes of pro-war propaganda, it means the film failed as a character study because it spent too much time on the battlefield.