The hyperbole about Obama's actions aside, the United States already is a social welfare state -- almost right up there with the Europeans -- if you measure the total amount of drain on the Treasury caused by spending and subsidies on such things as health care and retirement.

The one big difference is that in the American social welfare state, a lot of the benefits go to the rich.

"We spend a tremendous amount on private social welfare through tax subsidies," said Christopher Faricy, a political science professor at Washington State University whose forthcoming book is about our divided welfare state.

"It just goes to a drastically different population than what we usually associate with welfare programs," Faricy said.

But there's also a whole other world of social-welfare measures in the tax code -- called tax expenditures -- that benefit individuals and companies.

The two biggest tax breaks with a social welfare purpose are the exemptions for employer-sponsored health benefits (which cost the U.S. Treasury about $184 billion a year in foregone revenue) and for contributions to 401(k) and other retirement plans and pensions ($113 billion).

In stark contrast to social programs that involve the actual outlay of tax dollars, the tax breaks vastly favor the rich over the middle class and the poor. The biggest benefits accrue to people who can afford to put a lot away for their retirements and have generous health insurance plans. Even the charitable-donation exemption (which costs the Treasury about $43 billion a year) favors those in the higher tax brackets, because they get a bigger federal subsidy for each dollar they give.

Based on direct spending on social welfare programs as a proportion of the total economy, the U.S. (at 16.2 percent) lags behind every country in Europe except Slovakia, according to data analyzed by the Organization for Economic Cooperation and Development. 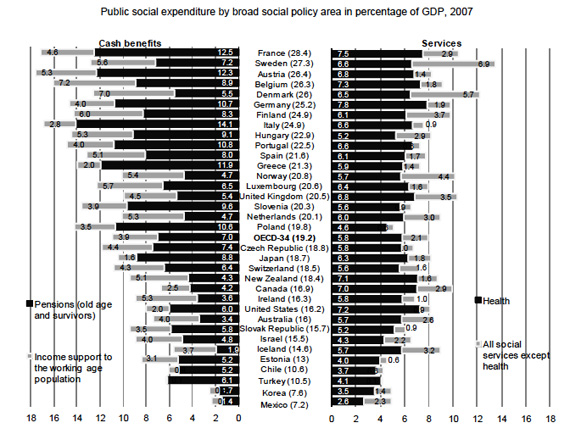 By contrast, when it comes to tax breaks with a social purpose, the U.S. -- at 2 percent of gross domestic product -- leads the pack.

"Once tax expenditures for social welfare programs are included in social spending figures, the U.S. welfare state is a similar size to those in Europe," Faricy said.

Faricy's research focuses on how there are essentially two American social welfare states -- one for each political party -- and they ebb and flow depending on which is in power. But the point is: "They both believe in massive government subsidies."

Faricy said there's a lot of misunderstanding about the politics surrounding the Republican welfare state. While opponents of social programs often complain that what they call entitlement spending is allowed to grow unrestrained, Faricy argues that the tax expenditures are even more protected from the budget process, as there's no actual line item for the revenue that each of them costs the Treasury.

"The only way to get rid of these tax expenditures is to pass a tax bill," Faricy said -- and that's no simple task. "If you considered it spending, then we'd revisit it annually," he said.

"There's a correlation between the areas that we spend the most on through the tax code and industries that have cost problems," he said.

Dan Froomkin is senior Washington correspondent for The Huffington Post. You can send him an email, bookmark his page; subscribe to his RSS feed, follow him on Twitter or on Facebook, and/or become a fan and get email alerts when he writes.