"Give me children, or else I die. Am I in God's stead, who hath withheld from thee the fruit of the womb? Behold my maid Bilhah. She shall bear fruit upon my knees, that I may also have children by her." Handmaid's Tale, Margaret Atwood

In Atwood's novel, which takes place "after the catastrophe, when they shot the president and machine-gunned the Congress and blamed it on the Islamic fanatics," becoming pregnant is the one thing the Handmaids can do to rescue themselves from death. Not so for today's surrogates.

"Brooke Lee Brown, 34, of Burley, [Idaho] passed away Thursday, Oct. 8, 2015, at St. Luke's Regional Medical Center in Boise, due to complications during pregnancy."

On Oct 8, just days before her 35th birthday, Brooke reportedly died either of placental abruption - the result of the placenta separating from the inner wall of the uterus before delivery - or amniotic fluid embolisms. Both are rare pregnancy complications that can occur suddenly in the last trimester and, left untreated, put both mother and baby in jeopardy. The twins she was about to deliver any day via a scheduled cesarean section reportedly lived for a short time on life support before losing their lives as well. 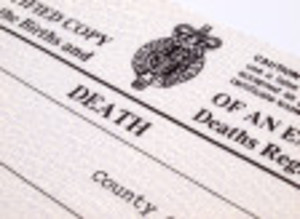 The twins' demise is not mentioned in her obituary, however, nor is there any mention that Brooke died while serving as a paid surrogate for by a couple from Spain, one of many countries in which surrogacy is illegal. Tess Shawler, of Rocky Hill Mountain Surrogacy in Idaho, who may have arranged Brooke's surrogacies, has found American surrogates for people from Australia, Canada, Spain, England, and Germany.

Brooke's funeral is taking place as I write this. A GoFundMe page, set up to raise funds for Brooke's memorial service, says that she was a surrogate for five babies though it is unclear if that includes the two who reportedly died along with her and how may were multiple births.

Dr. Michael A. Feinman, an obstetrician who specializes in Reproductive Endocrinology and Infertility at HRC Fertility with an office in Encino, California, at Havingbabies.com told me that the surrogates he and others utilize to serve their clients have as many as six surrogate pregnancies or more as long as their OB/GYN gives consent. Dr. Feinman says, he and others in the industry also limit surrogates to two cesarean births. He also made it very clear that placental abruption is rare and not related to grand multiparty - having many pregnancies.

Dr. Feinman writes that Brooke's death "underscores the ethical problem with asking women to serve as surrogates for non-medical reasons," and he says, "it is an important reminder that the practice should only be allowed for legitimate medical purposes." Is he implying that Brooke's situation was for non-medial need or less than legitimate? Either way, he concedes on his blog that:

"To the family of this unfortunate woman, the reason she was surrogate does not matter right now."

Indeed. Brooke, who was "a smart, fun, funny, and beautiful young woman that people wanted to be around," left a husband and three sons.

Though few statistics are available, commercial surrogacy is increasingly prevalent in the United States with the number of babies born to gestational surrogates growing 89% percent from 2004 to 2008. In Brooke's home state of Idaho alone there are an estimated 60 gestational surrogate births per year.

The growth rate continues and far exceeds growth in the number of IVF babies, generally. Commercial surrogacy is fast becoming the preferred route for gay couples to have children, so much so that the trend is now known as the "Gayby" revolution. According to The Council for Responsible Genetics report, "Surrogacy in America": "The expansion of this market demands further study, oversight, and regulation."

No longer do surrogates conceive children in a do-it-yourself manner. Today's surrogates incubate children unrelated to them. They are implanted with a fertilized embryo which may have been created using the intended parents' own genetic material or sperm and/or egg purchased anonymously. Because a medical procedure is necessary to accomplish the pregnancy, all are done through clinics that specialize in surrogacy and who, reportedly, follow recommendations of the American Society for Reproductive Medicine.

The guidelines include the surrogate being between 21 and 39 years of age and having children that she birthed and parents. They claim to avoid using women who are financially destitute by disallowing women on Medicare or other government assistance. The surrogates undergo careful screening for both mental and physical fitness and receive more stringent pre-pregnancy care than any mother just becoming pregnant and giving birth. In India, the surrogates remain in the clinics so that every detail of their lives is monitored to ensure they deliver a healthy baby.

The only requirement of the baby recipients is that they can afford to pay the $85-$120,000 price tag.

American surrogates receive very little compensation while undergoing medical screening including blood work and then hormone injections. Payments, which generally total $25-28,000, do not begin until a pregnancy is confirmed. LaMothe stressed that the surrogates volunteer and many do it as many as 5-6 times for compensation that amounts to minimum wage. Additionally, they all read and sign a contract before beginning the process that explains the risks and 98 percent of surrogates gladly hand over the baby.

Where Do We Draw the Line?

Many discussions of the ethics and morality of surrogacy, as well as polices and laws regulating surrogacy, differ based on commercial (paid) surrogacy versus in-family or altruistic surrogacy. Great concern has been expressed about the exploitation of indigent women in places such as India and Thailand where surrogacy is far cheaper than in the US.

Dr. Feinman, who has earned a substantial portion of his living assisting compensated surrogate births since 1992, however, makes the distinction between "medically necessary" and "weak or non-existing medical reasons" what "some pundits," he says, call "social surrogacy."

In an interview, Dr. Feinman also called non-medical choices to use a surrogate "lesser" and "soft indications." He told me that "finding surrogates for cockamamie reasons is difficult" and he claims to have turned down such clients.

LaMothe told me in a telephone interview that few women would consent to being a surrogate for someone who was not infertile or unable to carry a pregnancy.

Same sex couples, who are increasing demand for surrogacy, are a "gray area" in terms of necessity, according to Dr. Feinman, who also makes the strange claim that:

"Also, we have seen an increase in wealthy women from certain countries that can easily carry a baby, but see gestational surrogacy as a way to obtain a U.S. passport for their child."

A very odd claim inasmuch as surrogates are not named as the mother on the children's birth certificates.

Feinman justifies surrogacy based on the "medical necessity" of the wanna-be parents as if having a child were a medical need like having two functioning kidneys. Yet organs that are vital for life are not allowed to be sold. Nevertheless surrogacy allows human babies to be contracted for and sold in contradiction to laws against human trafficking and slavery.

The word altruistic is one heard often from those in the "surrogacy community." The doctors, lawyers and all others who profit from it praise surrogacy as an "act of generosity and commitment to the creation of a wanted life." The surrogates - many of whom LaMothe claims are teachers and nurses, people who are wired to help others - are motivated by empathy for those unable to bear a child. They believe they are changing lives by helping families achieve their dream despite other alternatives such as adoption.

The "intended" or purchasing parents, says LaMothe, do not feel they are asking someone to take a huge risk for them as the majority of heterosexual couples who use surrogates have themselves undergone the hormones and IVF treatments.

The Council for Responsible Genetics points out, however, a fact made all too clear by the death of Brooke:

"Beyond the risks associated with ART, surrogate workers often must bear the additional medical complications of multiple pregnancy."

Dr. Feinman said that already having children is a criterion in part because the surrogates are risking complications - including losing their uterus - that will end their childbearing.

Not everyone sings the praises of surrogacy, however. Anita L. Allen writes in the Harvard Journal of Law and Public Policy of the "socially retrogressive character of surrogacy."

Allen compares surrogacy to slavery as did a group of surrogate mothers who called on Congress and state governments to outlaw the practice in 1987, calling surrogacy ''an institutionalized form of slavery.''

In Switzerland, surrogacy is banned, as it is in most of the industrialized world, because "a child must be protected from being downgraded to a commodity which can be ordered from a third party." Surrogate mothers, say the Swiss, also needed to be protected from the commercialization of their bodies. Swiss civil law prohibits a pregnant woman from "actively abandon[ing] her rights regarding the child before it is born."

Surrogacy, and all anonymous reproductive technologies, are modeled on adoption wherein natural parents are discarded and disregarded in order to meet the desires of the purchasing parents. Jeff Shafer, senior counsel at the Alliance Defending Freedom wrote two days before Brooke's death:

"The surrogacy industry exists to decouple child-creation from conjugal relations, to separate gestation from enduring motherhood, and to make biological ties irrelevant to legal child custody. Fragmenting persons, parts, and relations--submitting each to commercial negotiation--is its entrepreneurial essence."

"...the financial compensation should not induce women to take these risks. Intended parents and health care professionals alike should keep these risks in mind when they consider moving forward with gestational surrogacy."

Baleigh Scott writing about this tragedy, points out that:

"...in the face of deaths such as Brooke's, it's hard not to lament the growing commodification of the womb. To chalk up Brooke's death to an occupational hazard seems to make an industry of childbirth. But children are not commodities, and women's bodies are not factories--and we should oppose cultural practices that treat them as such."

An anonymous source reveals that Brooke delivered surrogate babies in 2013, 2014, and was scheduled to deliver another in 2015, much of it documented on her Facebook page. It is also claimed that she was impregnated approximately three months after giving birth without giving her body ample time to heal.
Jennifer Lahl of the Center for Bioethics and Culture asks, "why isn't the media all over this and demanding an investigation of reckless endangerment, malpractice, and negligence."

Perhaps her family will demand a full investigation and seek justice and compensation for the loss of this young mother. And hopefully this case will serve as a warning to anyone considering being a surrogate. Brooke wasn't the first.Let's hope she's the last.