That head of lettuce in your fridge showing the first faint signs of wilting, those remaining mashed potatoes now a little too cold huddled on your plate, that second cookie you thought you wanted but now you're not so sure, that extra trip to the buffet table to grab another plate because, well, you can. Maybe you'll eat these items, maybe you won't. It's your body after all, you paid for it, you get to choose, right? Anyway, there's always more, way more, where that came from.

Journalist Jonathan Bloom has a brand new book out called American Wasteland, which looks at why we waste so much perfectly edible food. What is it about our relationship to food that's changed so drastically since the Depression-era hoarding of our parents or grandparents? Bloom goes through the entire food chain, from gathering to garbage bin, to show where food is wasted and to offer suggestions why. This is an important book, make no mistake. His insight gets to the heart of not only what it means to be a consumer, but more to the point, what it means to be an American in this age. I caught up with Bloom for a few quick questions before he hit the reading circuit...

Chris Elam: Let's cut to the chase, Jonathan -- why do Americans today waste so much food?

Jonathan Bloom: We waste food because we take it for granted, simple as that. Food is so abundant in this country. We produce about twice the amount of calories needed to feed all Americans, and it shows -- both in the levels of obesity and waste.

Furthermore, we waste food because we can. For many Americans, food is still tremendously cheap in relation to our incomes. True, food prices have risen in the last few years. Yet we still only spend about 10 percent of our disposable income on food -- less than any other nation. Those last few scoops of broccoli may seem pretty worthless, but those actions have a cumulative effect. The average family of four throws out $1,350 of food every year (using the conservative 15 percent rate of waste advocated by some experts).

Finally, we squander so much of our food because we've become quite superficial about it. We expect our fresh foods to be both beautiful and uniform, or at least supermarkets think we do. Anything not cosmetically flawless nor the right shape and size is cast aside at some point in the food chain. This increased emphasis on our food's appearance stems largely from the ever-increasing popularity of food TV and the abundance of glossy cooking magazines. Yet, food isn't always "glossy."

CE: How about giving us 3 examples -- let's call them "eye-poppers" -- that unmistakably demonstrate we've got a major problem on our hands?

JB: Picture the Rose Bowl, the vast 90,000 seat stadium in Southern California. Now picture it filled to the brim with food. America wastes that much food every single day. How much waste is that, exactly? I thought you'd never ask. About 40 percent of all food produced in this country isn't eaten. That waste occurs at every stage of the food chain, from farm to fork.

At what cost? Here's another eye-popper: every year, through uneaten food, we waste 70 times the amount of oil that was spilled into the Gulf of Mexico during the three months of the Deepwater Horizon gusher. That's because a tremendous amount of energy goes into producing, harvesting, transporting and chilling our food. When we don't eat the items, those resources were used in vain.

Finally, by simply removing trays from all-you-can-eat cafeterias would reduce food waste by about 30 percent. That proves what we already suspected: our eyes are bigger than our stomachs. If left to our own devices, we consistently take more food than we need and waste an awful lot. 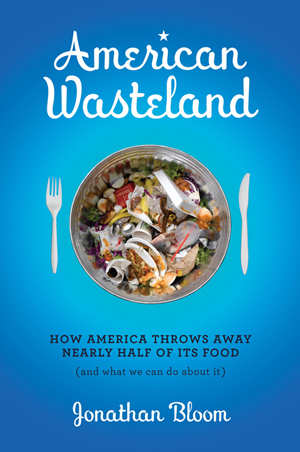 CE: What solutions, or suggestions, do you offer in American Wasteland?

JB: I offer solutions at the farm, supermarket, restaurant and household level. Since I'd bet the majority of you reading aren't farmers nor restaurateurs, I'll stick with home suggestions. To reduce waste, you can:

-- Shop smarter. Planning out dinners and making a detailed shopping list can stop us from buying more food than we can possibly eat before it goes bad. If you often don't have time to cook dinner after work, don't shop as if you do.

-- Serve reasonable portions. Restaurants have warped our idea of what's a sensible amount of food to eat. This often means we take or receive too much, prompting us to either overeat or waste food. I discuss this trend in my book, but check out Lisa Young's The Portion Teller for further evidence.

-- Save and eat your leftovers. The former is easy, but the latter is the important one. If you're not a leftover lover, try repurposing your accumulated extras into another dish.

-- Compost! When you do have food waste -- and petless homes will always have some waste -- try to keep it out of the landfill, which has some serious environmental consequences. Composting, whether by traditional bin, worms, Bokashi or the indoor NatureMill, does just that. It also creates a usable soil amendment to replace the nutrients to the earth.

CE: Finally, is there hope? Are there organizations out there turning this negative into a positive?

JB: Yeah there's definitely hope. We as individuals have great agency here, because households produce a fair amount of America's waste. A study of New York's Tompkins County found that homes created about 40 percent of its food waste, more than any other segment of the food chain. When reducing food waste becomes as commonplace as recycling, we'll have a significant impact.

Also, supermarkets and restaurants are starting to wise up. Walmart just announced a goal of reducing food waste at its stores by 10 to 15 percent. The success of TGI Friday's Right Portion, Right Price menu shows that not everyone defines "value" as having 1,500 calories plunked down in front of them. I'm optimistic that more businesses will commit to reducing waste in the coming months and years.

As far as organizations go, there are many food recovery groups out there providing a vital service: rescuing unsellable but edible food to redistribute to those in need. New York's City Harvest and D.C. Central Kitchen popularized the idea, which now occurs nationwide. Perhaps the most impressive outfit, though, is Sacramento's Senior Gleaners. This group of septua-and octogenarians pick excess crops from farms and vegetable gardens and receive donations by the pallet load from major food companies and retailers. They also fundraise by hosting -- what else? -- Bingo nights.

In addition, Ample Harvest enables the redistribution of homegrown produce by helping backyard gardeners identify nearby food banks. As a result of this garden gleaning, local, nutritious produce goes to those who need it, instead of going for naught. If that's not reason for hope, I don't know what is!