WASHINGTON -- Will the shooting of Rep. Gabrielle Giffords (D-Ariz.) and 20 others in Arizona turn public opinion in favor of tougher gun control measures? The evidence is mixed at best. While public opinion has generally turned against stricter gun-control measures over the last twenty years, majorities continue to support greater restrictions on the sort of semi-automatic weapon used in the Tucson shootings.

For the last 20 years, the Gallup organization has tracked whether Americans "feel that the laws covering the sale of firearms should be made more strict, less strict or kept as they are now." As Gallup explained in a report last November, that support has declined gradually over the last two decades to the point that a "record low 44%" now support stricter gun laws, while a majority prefer laws that are kept as they are currently (42%) or made less strict (12%). 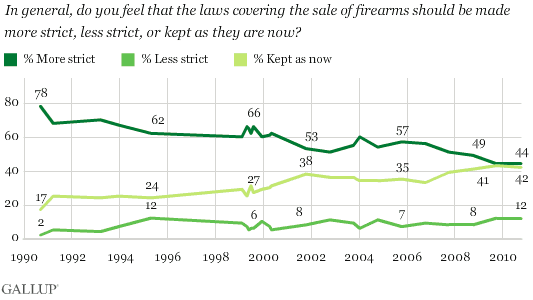 As noted yesterday by ABC News pollster Gary Langer, that slow steady decline continued over a period that included notorious gun crimes like the slayings at Virginia Tech in 2007 and in Columbine, Colo. in 1999. Support for a ban on all handguns, measured by Gallup since 1960, shows a similar long-term trend. 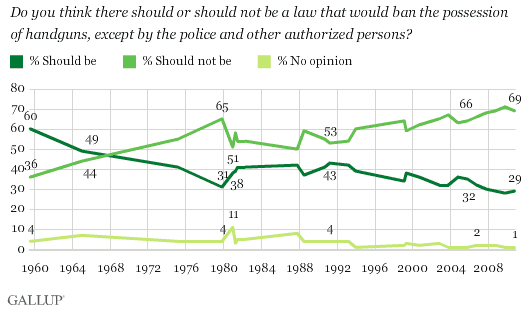 At first glance, Gallup's handgun ban question appears to show an increase in support following the attempted assassination of President Ronald Reagan in March of 1981. However, the apparent decline occurs on a survey conducted in December of 1980, four months before the Reagan shooting, and is mostly due to a single outlier result in January of 1980 showing unusually strong opposition for that era (full data available here).

On the other hand, the Pew Research Center found a brief increase in support for gun control following the Columbine shootings on a measure asking whether it is more important "to control gun ownership" than "to protect the right of Americans to own guns." Support for gun control on this measure rose from 57% in 1993 to 65% following the Columbine shootings, and remained at roughly that level for nearly a year (on two subsequent surveys) before falling back to the mid 50s in the spring of 2000. 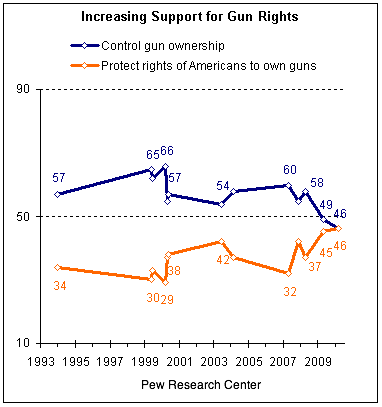 The Pew Research data shows no apparent reaction to the Virginia Tech shootings, as noted by their report at the time.

While most Americans reject generally stricter gun control laws or outright bans on handguns, as ABC's Langer also points out, majorities still favor bans on the sort of semi-automatic gun allegedly used by Jared Lee Loughner in Arizona. The precise number depends on the wording of the question (and possibly on timing). But, as the following table shows, three organizations have found majority or plurality support for bans on semi-automatic weapons in recent years. 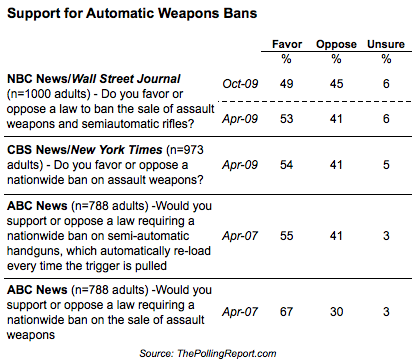 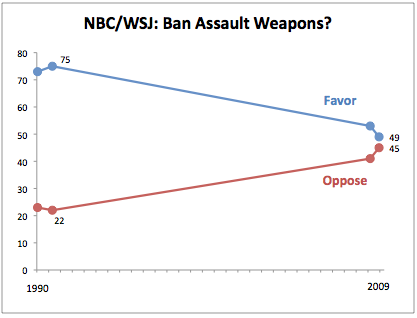 The Arizona shootings will provide another test. One contributing factor in any change of public opinion may be whether Democrats choose to advocate for specific new gun control measures. Without prominent leaders pushing for a change, it is hard to imagine a reversal of this decades long trend.