According results released this week from a Gallup poll conducted last month, 34 percent of those surveyed said they have a "great deal" or "quite a lot" of confidence in public schools. The number is unchanged from last year through controversial policies and political battles regarding legislation and budgets.

The current level of confidence in public schools is also a departure from the 58 percent confidence rating Gallup surveyed in 1974 and less than the 41 percent in 2004.

Many school systems got a lifeline in 2009 when the American Recovery and Reinvestment Act directed about $100 billion to help fund public education and save teachers' jobs. Americans' confidence in U.S. public schools did trend somewhat higher that year, to 38 percent, but not enough to be statistically meaningful. Now, with stimulus funding running out this year, many education programs and jobs are again at risk. 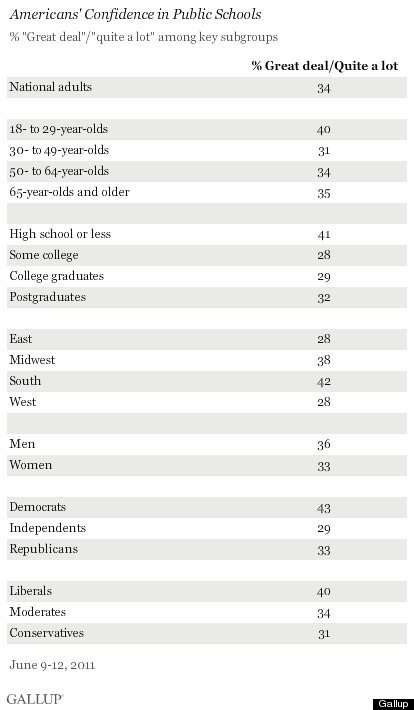 But Wednesday in D.C., U.S. Secretary of Education Arne Duncan defended the Education Department's request for a 13.3 percent budget increase over 2011.