(RNS) A new survey shows in stark relief that what some are calling the Great Decline of religion in America continues: Since 2012, the U.S. has about 7.5 million more Americans who are no longer active in religion.

Earlier this month, the 2014 General Social Survey was released. The GSS is the gold standard for sociological surveys. Funded by the National Science Foundation, this multimillion-dollar study gives us the most accurate data on American society — including religion.

(An important point to remember as you see the data: Each percentage point increase represents a growth of 2.5 million adults. So a 3-point rise in secularity, for example, means that about 7.5 million people left religion since 2012.) 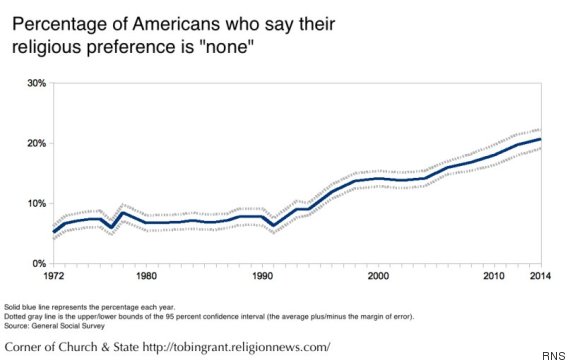 When asked their religious preference, nearly 1 in 4 Americans now says “none.” Up until the 1990s, the percentage who were in this group known as “nones” hovered in the single digits. The 2014 GSS showed that nones are 21 percent of the population, up one point from 2012.

How large is this group? There are nearly as many Americans who claim no religion as there are Catholics (24 percent). If this growth continues, in a few years the largest “religion” in the U.S. may be no religion at all.

2. Americans aren’t going to church like they used to. 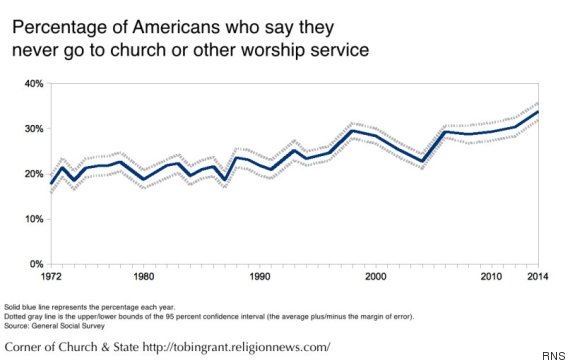 The number of Americans who never darken a church door is also at a new high. Over a third of Americans (34 percent) never attend a worship service (other than weddings and other ceremonies). This is a 3-point increase from just a few years earlier. 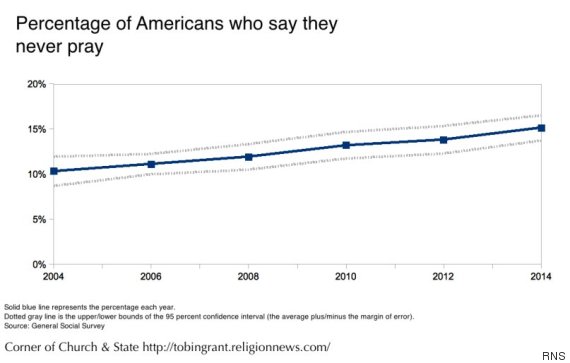 Is this just a departure from organized religion? Even with people no longer identifying with religion or attending worship services, they still pray. Nearly one-in-six Americans never prays.

Largest Religious Group In Every State (2014)