The number of Americans who identify racism or race relations as the nation's top problem increased dramatically to 13 percent, according to a new Gallup survey, a figure not seen since the Rodney King verdict and subsequent Los Angeles riots in 1992.

In November, only 1 percent of Americans cited racism or race relations as the biggest problem. The rise comes on the heels of several controversial incidents in Cleveland; Ferguson, Missouri; and Staten Island, New York, in which black men were killed by police officers. Last weekend, protesters marched across the country, including thousands in the nation's capital, to call for justice and decry racial discrimination. 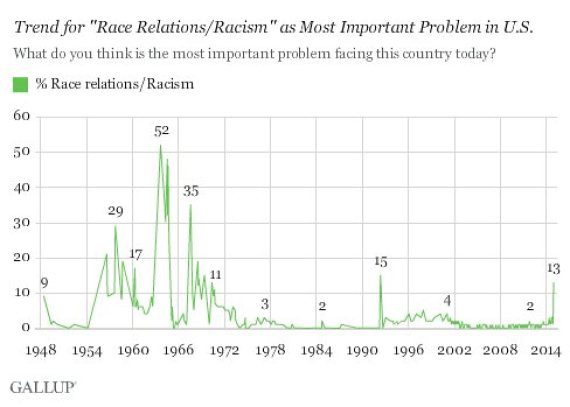 According to Gallup, nonwhites are now more than twice as likely to view racial issues as the nation's top problem as whites are, 22 percent to 9 percent. Even more stunning, however, is that the topic of racism or race relations now "matches the economy in Americans' mentions of the country's top problem." Government still tops the list, though it dropped slightly, and the percent of people who identified unemployment or the economy as the most important problem also decreased -- a sign of an accelerating economic recovery. 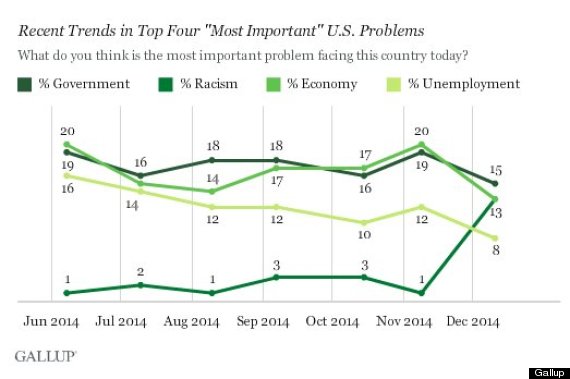 Some Republicans have attributed the sentiment to the nation's first black president. Retired neurosurgeon Ben Carson, who is considering a run for the White House in 2016, said last month that race relations in the United States have actually gotten worse under the Obama presidency.

"I actually believe that things were better before this president was elected. And I think that things have gotten worse because of his unusual emphasis on race," Carson said.