A majority of Americans support the legalization of recreational marijuana, according to a new poll from CBS News -- and it's the highest percentage in support since the news organization began asking the question in 1979.

Just in time for 4/20, the annual marijuana holiday, CBS News released a poll showing 53 percent of Americans are in favor of marijuana legalization. 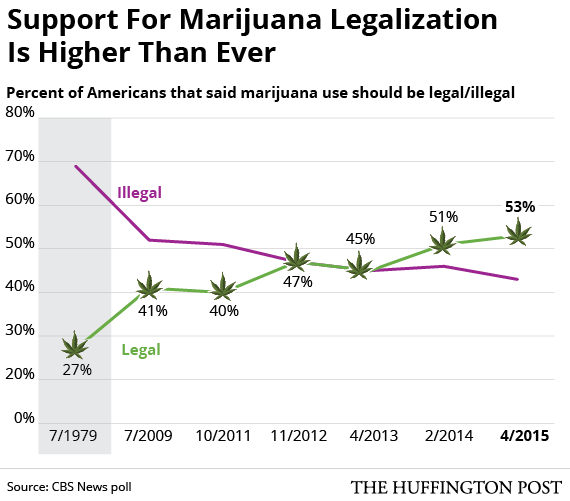 Although that's the highest amount of support for marijuana legalization CBS has ever polled, it isn't the highest level of support ever found. And because survey methods can vary, it's useful to look at a number of national polls to get a fuller picture of the issue.

Just last week, Pew Research Center found the identical amount of support as CBS. In 2013, Gallup found 58 percent of Americans supported legalizing marijuana -- a 10-point surge from the year prior -- but in 2014, the organization found a sharp drop in that support, to 51 percent. A report released last month by the Democratic-affiliated Benenson Strategy Group and SKDKnickerbocker found 61 percent of Americans in favor of legalization -- some of the highest support for marijuana legalization to date. Earlier this year, General Social Survey, widely regarded as the most authoritative source when it comes to researching public opinion, found 52 percent of Americans in support of legalization.

Support for legalization is highest among younger, more left-leaning Americans, according to CBS, and while a majority of men favor legalization, women remain split on the issue.

By a large margin, Americans also believe that marijuana is safer than alcohol -- 51 percent of those surveyed said alcohol is more dangerous than marijuana, while only 12 percent believe marijuana is the more high-risk drug. Americans' attitudes on the dangers of marijuana, exaggerated during the "Reefer Madness" era of drug policy, have largely declined in recent decades. A survey released last year by NBC News/The Wall Street Journal found that Americans believe that even sugar is more harmful than cannabis.

To date, 23 states have legalized marijuana for medical purposes, and four states, along with the District of Columbia, have legalized recreational use. Still, the federal government continues to ban the plant, classifying it as one of the "most dangerous" drugs alongside heroin and LSD.