Americans of all parties are more ready for a female president than they were four years ago. In New Hampshire, more Republicans are pro-choice than pro-life. And opinion research on Facebook is daunting, despite its broad reach. This is HuffPollster for Friday, March 27, 2015.

TWO THIRDS READY FOR A WOMAN PRESIDENT - Kathy Frankovic: "Seven years ago, Hillary Clinton lost the Democratic nomination; she is expected to try again next year. Is America ready for a woman? According to the latest Economist/YouGov Poll it is – that is, two in three Americans think the country is ready to elect a woman as President. Eight years ago, not quite as many Americans thought that was the case: just over half said the country was ready to elect a woman. The change seems to have come from women themselves. In several previous polls, men were more likely than women to answer “yes” when asked if America was ready to elect a woman president. Now there is almost no difference: 66% of men and 67% of women think the country is ready. Hillary Clinton currently holds a sizable lead with Democratic voters: in this poll she is more than 50 points ahead of her nearest rival. As before, the partisan differences on the question about readiness for a woman remain. But Republicans, Democrats and Independents are all more likely than they were eight years ago to say America is ready to elect a woman." [YouGov] 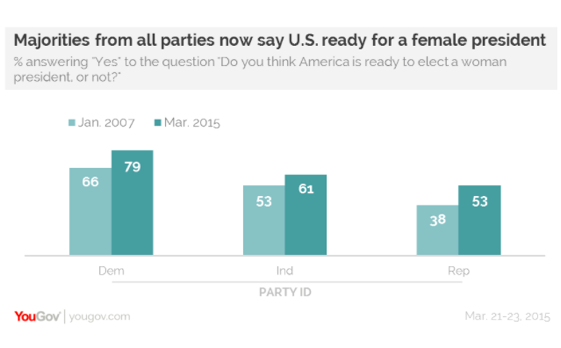 OBAMA'S NUMBERS DIP ON ISIS, TERRORISM - Sarah Dutton, Jennifer De Pinto, Anthony Salvanto, and Fred Backus: "By a large margin, Americans see the fight against the militant group ISIS as going badly for the U.S. - a view similar to last month. Just 43 percent of Americans now favor the U.S. sending ground troops into Iraq or Syria to fight ISIS militants; 46 percent oppose it. Support for sending ground troops rose to 57 percent in February, in the immediate aftermath of the death of aid worker Kayla Mueller, but has now dropped to levels seen last fall….Evaluations of the President on terrorism and ISIS are slightly more negative than last month. At 36 percent, President Obama's approval rating on handling ISIS is the lowest since CBS News began asking the question last fall. His ratings on foreign policy generally and the economy are largely unchanged." [CBS]

NH GOP more pro-choice than pro-life - Scott Bland: "While social conservatives dominate other early states in the GOP nominating process, New Hampshire Republicans are divided or even slightly left-leaning on two major social issues, according to the latest survey from Suffolk University. A slight plurality of the state's 2016 GOP primary voters, 49 percent, describe themselves as "pro-choice" on the issue of abortion, while 41 percent called themselves "pro-life." On a national level, pro-life Republicans control their party by big margins (69 percent to 27 percent, Gallup found last year). But the New Hampshire voters who will help pick the party's nominee are further left....The same is true on the issue of same-sex marriage. Asked whether they favored legalizing same-sex marriage, 43 percent of the New Hampshire respondents said yes while 39 percent said no." [National Journal]

THE CHALLENGE OF USING FACEBOOK FOR RESEARCH - Kenneth Olmstead and Michael Barthel: "We know Americans increasingly use Facebook to get information and news. Our other research has found that 29% of Americans report liking or following political parties, candidates or elected officials on Facebook, while 36% say the same about news organizations, reporters or commentators and 41% follow issue-based groups. However, the nature of Facebook as a mostly private network limits what can be learned from it. We were able to learn how news organizations and newsmakers use Facebook to get their message out and how users interacted with those messages. But this is a small sliver of the overall activity on Facebook and represents only a facet of the use of Facebook for local news. The majority of Facebook activity is still private and available only to Facebook itself. Even with just publicly available data, researchers face ethical and privacy concerns when deciding what to publish. [Pew Research]

OPINIONS SPLIT ON DEFENSE SPENDING - HuffPollster, with Christina Wilkie: "As the U.S. prepares to spend billions of dollars fighting extremist groups in the Middle East, there is little consensus among Americans as to how much the federal government should be spending on its own military. In a new HuffPost/YouGov poll, 34 percent of Americans want the federal government to keep spending about the same amount on defense, while 28 percent want to spend more, and 24 percent want to spend less. Responses were split down the middle on whether spending more on defense would make the nation any safer….By nearly 3-to-1, Republican respondents believe that more defense spending will make the U.S. safer as opposed to not. Democrats say by almost 2-to-1 that more money for the military will not make Americans safer….For Americans of both parties, however, concerns about defense spending pale in comparison to worries about the growth of the overall federal budget. The poll found that 48 percent of Americans believe reducing government spending is a more important priority for the federal government than spending money on the military, with just 21 percent prioritizing defense." [HuffPost]

-Jeb Bush leads the GOP field nationally and in Florida, according to a poll from Saint Leo University. [Saint Leo]

-Amy Walter offers four reasons why it will be tough for a Tea Party candidate to win the Republican presidential nomination in 2016. [Cook Political]

-Harry Enten ponders which Democrats could step up if Hillary Clinton doesn't run. [538]

-Google search results reveal that millions of Americans may still be looking to register to vote after deadlines have passed. [WashPost]

-Jobs for illegal immigrants have shifted slightly from blue collar to white collar since 2007. [Pew]

-Eleanor Roosevelt is the top female pick to replace Andrew Jackson on the $20 bill. [YouGov]