Few Americans are paying close attention to the 2016 presidential campaign yet, but they know what they want to see when they do tune in: not the candidates’ diets or their lunch stops, but, rather, their policy positions and fundraising.

The other options respondents had to choose from were: who candidates are meeting with (10 percent chose this), where candidates hold events (7 percent), and candidates’ daily routines (3 percent). Fourteen percent said anything a candidate does should be covered.

The poll also sought to determine how many people are already paying close attention to the race. Within that group, the numbers are even more skewed toward policy and fundraising. Seventy-four percent of people who are already paying close attention chose policy positions as one of their top two coverage priorities, and 43 percent chose fundraising information. Less than 1 percent of these respondents said they cared about the candidates’ daily routines. 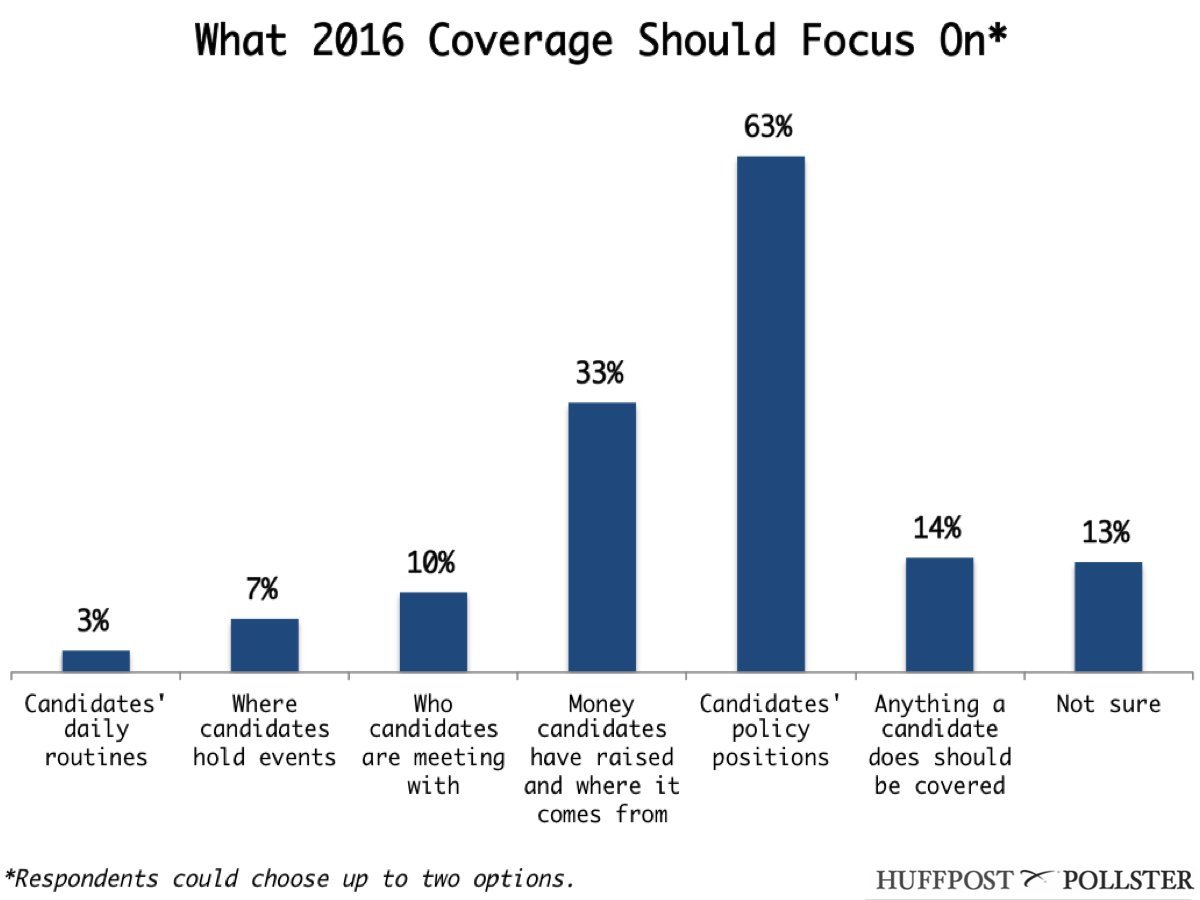 But how many people actually care about the 2016 election at this point?

The HuffPost/YouGov poll used a two-question test to determine the proportion of Americans who are paying close attention to the election. The first question asked respondents how closely they were following election news, and 28 percent said they were following it very closely. However, more than a quarter of those people contradicted themselves when answering the second question, which asked when they would start closely following the election. Of those who had answered the first question by saying they were following the the race closely, 74 percent answered the second question consistently, saying they were already paying attention. The remaining 26 percent selected different answers, saying they would start paying close attention later in 2015 or sometime in 2016.

Considering only those who gave consistent answers -- who said they were following election news very closely and were already paying close attention to the election -- it appears that an estimated 21 percent are watching the election closely as of May 2015. That means over three-quarters of Americans don’t care much about the election at this point. This estimate is consistent with what other polls are saying and with what polls have found at this point in previous election cycles.

Some might never follow the race closely: Seven percent of respondents answered the second question by saying they don't ever plan to play close attention, while another 10 percent don’t know if or when they will start paying attention.

Primary competitiveness seems to factor into the amount of attention paid -- only 25 percent of Democrats and 23 percent of independents are paying close attention to the campaign, compared to 41 percent of Republicans. The HuffPost Pollster chart is currently tracking 15 Republican candidates and potential candidates nationally, none of whom are averaging over 15 percent. The national Democratic chart, on the other hand, is tracking just seven candidates and potential candidates, and Hillary Clinton has a commanding lead with an average of over 60 percent. It makes sense that Republicans would be paying more attention than Democrats and independents.

The HuffPost/YouGov poll consisted of 1,000 completed interviews conducted between April 30 and May 2 among U.S. adults using a sample selected from YouGov's opt-in online panel to match the demographics and other characteristics of the adult U.S. population.