Glenn Blackburn, 45, has been collecting unemployment ever since he got laid off in August 2008. He's grateful for the money, but what he really wants is to put in an honest day's work.

"It's like a year and a half of just sitting around doing nothing," said Blackburn. "It gets demoralizing."

In fact, he'd rather the government paid him to do something rather than just send him a check every two weeks while he searches for a job. "I live in Michigan, and there is plenty to fix around here," the former casino worker tells HuffPost.

"Put me to work digging ditches or helping build roads. Anything is preferable to sitting on my butt. This would give those of us on unemployment back our pride and actually accomplish something with the money being spent. There is a work force of a million people just sitting idle waiting for something to do. That is a massive amount of lost labor that could be fixing America's infrastructure. Instead of unemployment, hire me to do that."

That potential work force is actually way greater than a million people; there are over 11 million American workers currently getting unemployment benefits and another 3.5 million or so who want jobs but can't find them.

Marvin Bohn, (pictured at right) a 57-year-old former executive chef in Ohio, is another American who wants to work for his money. He's been getting unemployment checks since June 2008.

"You keep wondering what's gone wrong. Is there something wrong with you? You apply for jobs you're overqualified for and you don't get 'em, and you get chided for making too much on unemployment."

By contrast, a government job sounds good to him. "Instead of receiving the unemployment checks, even if it's a fill-in job, it'd be doing good," he said. "I would be very happy to do that." 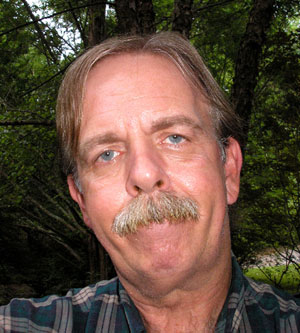 Christopher Hardin of Valdese, N.C., (pictured at right) said he, too, would jump at the opportunity to work rather than put up with the indignity of a futile job search in return for unemployment benefits. "Being 55, I haven't been able to find any work," said Hardin, whose most recent job was loading and unloading trucks for an auction house. "I apply for jobs all the time. I don't get any return email or phone calls."

Blackburn, Hardin and Bohn -- and however many other Americans want the government to put them back to work, too -- don't have many champions on Capitol Hill or in the White House.

Democratic leaders, increasingly worried that members of their party will get swept out of office in the November elections, are desperate to do something about job creation. But the packages they are seriously considering are a mishmash of ineffective or inefficient measures, distinguished only by their political safety.

The $15 billion jobs bill passed by the Senate Wednesday morning grants tax breaks to businesses that hire unemployed workers, and a $1,000 credit if the new workers stay on the job for a year. But economists point out that much of that will subsidize hires that would have been made anyway, and even in the best case won't make a big dent in the problem. The bill also encourages business investment by accelerating tax write-offs.

And yet, despite a distinct lack of enthusiasm from Democratic or Republican party leaders, economists from both the left and right made the argument at a Tuesday hearing of the House Financial Services Committee that there's an urgent need for the government to put people to work directly. And they explained why.

"Someone separated from the labor force runs the real risk of permanently separating from the normal economy. It is crucial that we reconnect as many people as possible before it is too late," said Kevin Hassett, a former senior economist at the Federal Reserve and current director of economic policy studies at the conservative American Enterprise Institute.

"The good news is that a lifeline now could easily start a worker back on a positive career track, making the lifeline a much more cost effective policy than years of welfare support.

"Direct jobs programs could be a much more powerful way to get this process going than last year's stimulus," Hassett said. "If the economic stimulus moneys were spent directly hiring individuals, they would have created 21 million jobs."

Larry Mishel, president of the progressive Economic Policy Institute, pointed out that this has been done before.

"Twice in the past during times of high unemployment, the United States successfully turned to large-scale programs of direct job creation," Mishel said. "We know from those experiences that a $40 billion public jobs program can be geared up quickly and help put a million of our citizens back to work in jobs that will improve their communities and contribute to shared prosperity."

Mishel suggested several "fast-track" jobs that could put people to work within six to nine months: painting and repairing schools and other public facilities, cleaning up abandoned buildings, and staffing emergency food programs, among others. Direct employment under Mishel's proposal would cost $40 billion a year at $40,000 per job. (Princeton economist Alan Blinder wrote in a Washington Post op-ed last week that direct hiring for public works jobs would cost $30,000 per year -- a lot less than the $100,000 per job he estimates for "garden variety" stimulus spending.)

By contrast, the proposals emanating from Congress and the White House won't work very well as long as consumers and other businesses aren't buying. A growing consensus among economists is that it's the demand side -- not the supply side --of the problem that needs to be more directly addressed.

"Businesses won't invest and start hiring until consumer demand picks up, which won't happen with 27 million people unemployed or underemployed. Obviously, the overwhelming need is to create jobs -- millions of them, as quickly as possible," Mishel said.

Andy Stern, president of the Service Employees International Union, told the House committee: "We began 2010 with fewer jobs than we had in 2000, though the labor force has grown by almost 11 million workers since then.

"There are currently more than 6 unemployed workers for every job opening. There are nearly 15 million unemployed workers in America; more than 6 million have been jobless for over six months. Worse yet, there are now almost 26 million workers who are either unemployed or underemployed. That is the equivalent to the population of 18 states. The scope and scale of the jobs crisis is clearly a national emergency."

And Mark Zandi, chief economist for Moody's Economy.com, told the panel: "We should err on the side of doing too much, rather than doing too little."

"Congress has the tools to create millions of jobs over the next 12 months," Mishel said. "It also has the responsibility. The public is rightly demanding action, and there is no excuse -- not the budget deficit, not fears of inflation, not feasibility -- for failure to act."

As for Glenn Blackburn, unemployed and living with his fiancee and her two daughters in Petoskey, Mich., he says he'd be more than happy to do the types of work Mishel talks about.

He worked for nine years at the Odawa Casino Resort, making about $17 an hour in wages and tips, before his layoff. He says the only work available anywhere nearby is what he calls "putt-putt jobs" -- clerking at convenience stores or washing dishes. With those jobs, he'd earn less than the $388 he's been pulling down in unemployment benefits every week, so it makes no sense to take them before his unemployment runs out (which he said will happen soon).

In the meantime, he's taking computer classes in hopes of making himself more employable. He'd be happier if the government just put him to work helping his own neighborhood.

"What I'm making on unemployment," he said, "if I could make that much and go out and they said, 'Go out and start digging, of course I would."