Americans with disabilities are more likely to be poor than any other demographic group, and their average income in 2012 was about $6,000 less than people without disabilities, according to a report released Thursday.

The report, "Fulfilling the Promise: Overcoming Persistent Barriers to Economic Self-Sufficiency for People with Disabilities," was released by retiring Sen. Tom Harkin (D-Iowa), whose Health, Education, Labor and Pensions Committee was scheduled to hold a hearing on the topic.

Of the 20 million adults with disabilities of working age, 80 percent want to work, the report says. But fewer than one-third are in the workforce, compared with 77 percent of Americans who don't have disabilities. More than 28 percent of adults aged 21 to 64 who have a disability and are not institutionalized live in poverty, compared with the overall 12.4 percent national poverty rate, the report says. The average annual income for adults with disabilities was about $6,000 lower than for people without disabilities.

Harkin called these statistics "deeply disturbing" and said they merit further investigation. While the U.S. has largely removed barriers to mobility, Harkin said, it's time to "tackle the barriers to economic independence and self-sufficiency."

In compiling the report, Harkin's staff spoke with more than 400 people with disabilities who are living in poverty. Their stories show disabilities have both financial and social costs. Many said they spend hours navigating red tape to get government benefits. The framework for disability aid prevents many from saving money because having too much in the bank may terminate benefits, the report says.

Jane, a 60-year-old single mother of five who has autism as well as a neuromuscular disability and runs a small business, told the report's authors that the time she spends advocating for herself and her children detracts from the time she has available to work. "The assumption is that disabled people are incompetent, and we don't have family obligations, [and] that we are stealing from the system," she said. "But being poor is a full-time job."

Expenses for people with disabilities can pile up. One young man with cerebral palsy reported requiring a $135,000 vehicle to be mobile. Toya, a 32-year-old single mother with cerebral palsy, said her disability necessitated new shoes each month. Respondents who require special clothes to adapt to their body shapes reported exorbitantly high prices -- a "price gouge," one said, enabled by low demand.

Meanwhile, it's hard for them to save. Many said they lacked significant savings. Cheryl, a 54-year-old woman with cerebral palsy and diabetes, receives government aid to support her independent lifestyle -- she volunteers while seeking a paid job. But to remain eligible for this support, she must keep her overall assets below $2,000. "We don't have it easy," she said. "We want to work like everyone else."

Ann Wai-Yee Kwong, a student at the University of California, Berkeley, and co-president of the Disabled Students' Union at Berkeley, said that she felt her opportunities were capped, according to written testimony she submitted for the Senate hearing. Wai-Yee Kwong, who needs braille text to read, said her Department of Rehabilitation counselor in California had low expectations.

"Her plan for my future was to graduate high school, attend an independent living skills center, then a trade school or a community college; attending a university was seen as a 'last resort,'" Wai-Yee Kwong said. "The ideal success she envisioned was for me to work at a call center or a factory that build boxes."

Harkin said solutions include "addressing the cultural biases and prejudices that remain about the ability of people with disabilities to do meaningful work," making government programs easier to navigate, making housing and transportation more accessible and "ensuring access to high quality education coupled with high expectations." 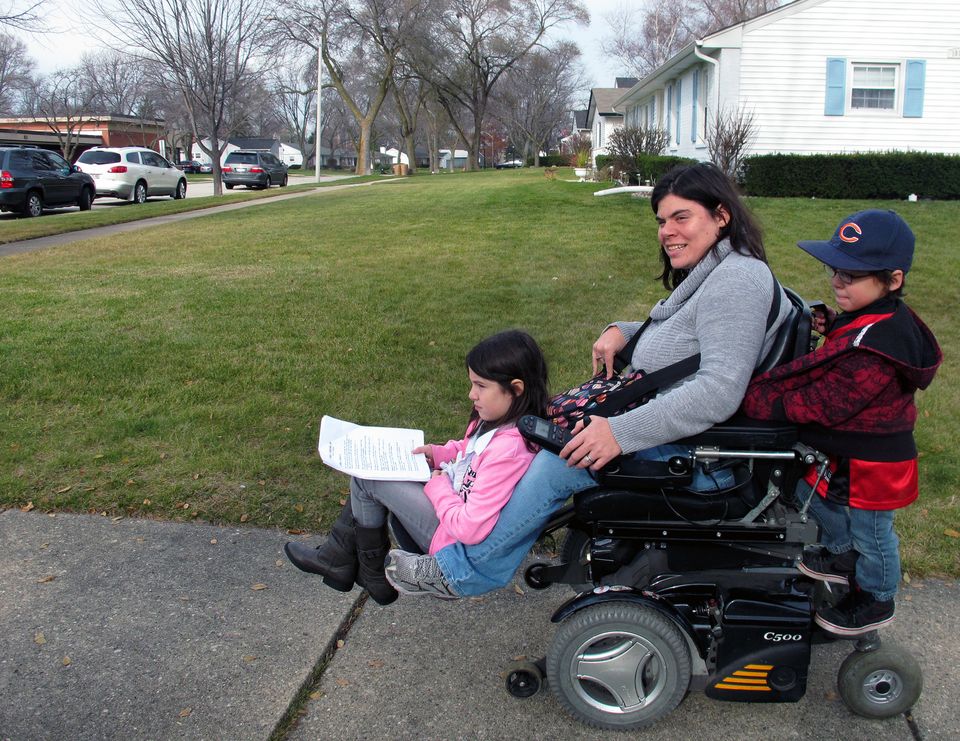 1 / 10
In this Nov. 19, 2012 photo, twins Abigail and Noah Thomas, 8, ride on the motorized wheelchair of their mother, Jenn Thomas, on their way to a school book fair in Arlington Heights, Ill. Thomas, a 36-year-old mom who has cerebral palsy, says her twins occasionally complain about having to do a few extra chores around the house to help her. Abigail nods and smiles upon hearing this, but says for the most part, their lives are "kind of normal." For her, having a mom with a disability is just how it is, she said. (AP Photo/Martha Irvine)
AP