The Republican national committee seems to think they're socialist. Dick Cheney dubbed them part of, you know, the "Old Europe," suggesting they're locked in a useless past. In any case, they've nothing to teach us, right?

In a world searching for answers to multiple assaults, it's probably not a bad idea to take off the blinders and look for what is actually working. I just spent two weeks in Germany and after I got accustomed to Hamburg's wide, well-groomed biking and running trails and rest stops on the autobahn that look like swank New York cafes - embarrassing my German friend by taking photos of the salad bar - I looked further.

Crisscrossing the country in 10 stops, touring for my latest book Getting a Grip - in German, Packen Wir's An! (Let's go for it!) - I passed groves of tall wind turbines in every part of the country. Looking graceful and powerful, to my eyes, some stood just in front of old, sagging power lines. I drove by at least a few fields, called "solar parks," blanketed with photovoltaic panels. I rode my first solar-charged electric bike. 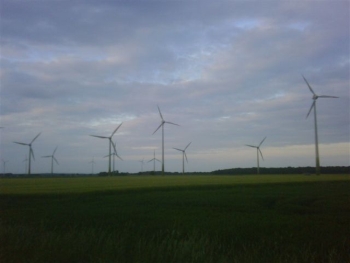 I could now see, literally, why Germany has earned its place among world leaders in clean energy - with over 15 percent of its electricity now coming from renewable sources. This shift didn't happen spontaneously, of course, but by using a legislative tool creating a win-win-win: for citizens, for the earth, for the nation. It is Germany's "feed-in tariff" law, upgraded about a decade ago.

And it's real simple - the law rewards any household, business or utility for becoming a renewable energy generator. It guarantees that you, the generator, can feed your power into the grid and that you'll be paid a price good enough to quickly recover your installation costs. And, that good price is assured for 20 years. The locked-in premium offered is reduced each year so the sooner you get started, the more you gain. Costs are spread across all rate payers and come to a few dollars a month.

In Germany, I'm told, this one law has generated about 280,000 new jobs. (Proportionally, in the United States that would mean almost a million jobs.)

It's such a simple and effective tool that it's already spread to over 64 countries, states, provinces and municipalities. My first day home, on NPR's "Living on Earth," I learn that Gainesville, Florida, is a recent convert. There, households pay about 13 cents a kilowatt hour for electricity, but they can now earn 32 cents a kilowatt hour for generating electricity. Not bad.

Apparently, about a quarter of U.S. utilities, those that are public or cooperative, would find it attractive and could adopt the approach just by deciding to do it without legislative action.

But my most enduring impression of Germany was nothing I could see in whirling blades, generous bicycle paths, or mouthwatering food at highway rest stops. It was a feeling - less stress, less fear; more trust.

The day I got home, the New York Times reported that German unemployment is significantly less than it was in 2006, even though I know Germany is hurting in the global crisis. German employers in a downturn can get help from the government to keep workers employed. Hmm. Isn't this approach a sensible complement to "unemployment" benefits that just pay jobless people to stay home or search for a new job? Germans aren't losing homes like we are because they didn't experience our housing boom or bust; and unemployment benefits there offer about two-thirds of previous pay, compared to less than half in the U.S.; and they last much longer.

And, as with their "rewarding renewables" approach to clean energy, Germans are innovating their way around the broken money system, too. They've created virtually hundreds of complementary currency systems, roughly 30 of which serve whole regions by keeping money circulating in the region and promoting regional goods and services.

The greater ease I felt among Germans might also reflect less stress of, and less fear of, poverty. The share of Germans who are poor -- living below 50 percent of the median income -- is not even half the share of Americans who are in the same situation. And in the U.S., the probability of dying before your 60th birthday is 35 percent higher than in Germany.

And it's worth noting that Germans achieve their quality of life using roughly half the energy per person that we do.

One particular scene stays with me. I am waiting for a friend outside a beautifully appointed women's restroom in the lower level of the main Cologne train station. People walk briskly by through a long, wide corridor of shops. My eyes land on two little girls, maybe 5 and 7, talking and playing across from me. I watch for a few minutes, and then it dawns on me that there's no parent in sight. Their mom has left them here to wait for her.

I realize that at home I'd probably never see this ordinary scene of public trust.

No culture can expect to look to another for answers, wholesale. But wouldn't it be tragic if we let mindless labels and manipulated stereotypes block us from inspiration and practical ideas just because they arise elsewhere? After all, these positive glimpses are of a country that in the last 100 years has experienced two wars on its soil, Fascism, genocide, and, for a huge portion of its people, totalitarianism enduring 40 years. Germany has not only survived but is working in many important ways. It might have just a little something to offer the world. 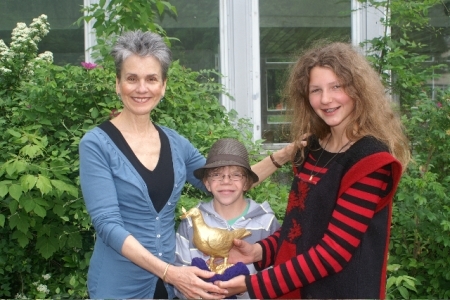 Children at the Evangelische Schule Berlin Zentrum presented me with "The Peace Dove" while in Berlin. There are 30 traveling around the world as part of the 60th anniversary of the UN Declaration of Human Rights.

More information may be found on Feed-in Tariffs in Powering the Green Economy: The Feed-in Tariff Handbook, Miguel Mendonca, 2009, Earthscan.