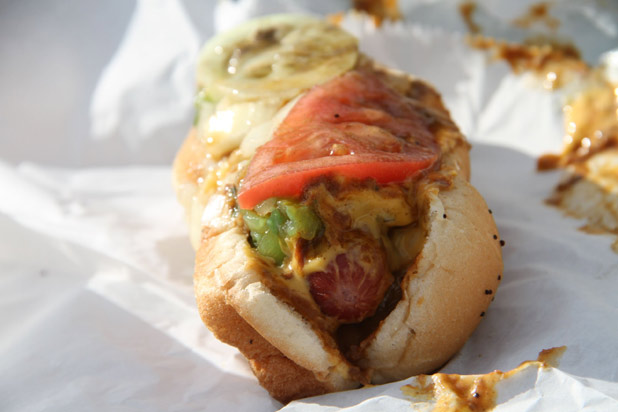 The hot dog is one of the few foods that's nearly impossible to screw up. You heat it through, tuck it into a bun, squirt on some mustard, and call it lunch. But there's a big difference between not screwing something up and turning it into a paradigm-shifting, transcendental dining experience. And there are lots of hot dog stands, restaurants, and drive-ins out there that have the power to change your life (Credit: Arthur Bovino).

The perennial grill mate to hamburgers, the hot dog sometimes gets the short end of the stick, charring at the back of the grill while juicy burgers are snatched up as soon as they hit the right temperature. But there's a science, if not an art form, behind constructing the perfect hot-dog-eating experience.

That experience was introduced more than 100 years ago, when German immigrants first brought over their frankfurters and started selling them on the cheap at amusement centers like Coney Island, arguably ground zero for American hot dog consumption. Charles Feltman is widely considered to be the first person to have applied hot dog to bun, in order to avoid needing to supply plates and silverware to customers at his sprawling Coney Island restaurant. Employee Nathan Handwerker opened his own hot dog stand a few blocks away in 1916 and sold them for less than Feltman, and became wildly popular (and remains so to this day).

The hot dog diaspora then began to take on a life of its own, as people began developing their own spice mixes and making their own hot dogs, and every region and group of people soon put its unique stamp on the snack. Greek immigrants in Michigan concocted a cinnamon-rich beef chili that came to be known as Coney sauce, but it has nothing to do with Coney Island, while 'michigans' are big in Upstate New York but have nothing to do with the state. In Chicago they top all-beef dogs with mustard, fresh tomatoes, onions, sport peppers, bright green relish, dill pickles, and celery salt. Spicy Texas Red Hots are popular in New Jersey, but not in Texas, and the uncured, unsmoked White Hot is popular in upstate New York. And the regional variations go on and on.

The 50 Best Cupcakes in America

According to a recent study by GrubHub, the country's most popular hot dog topping is cheese, followed by chili, mustard, onion, and Chicago-style. Ketchup is further down on the list, and, surprisingly, sauerkraut is down towards the bottom.

On our quest to find America's best hot dogs, we kept an eye out for drive-ins, restaurants, and roadside stands with a definitive style of hot dog and topping, one which embodies not only the region's quirks but the particular tastes and culinary traditions of its people. We judged these hot dogs based on several criteria: the quality of the ingredients (sourcing the franks from well-known regional producers and using fresh-chopped onions, for example), the entire hot dog-eating experience, from driving up to placing your order to taking that first bite, as well as reputation among professional critics and online reviewers.

In order to be included in our list, the vendor needed to have a trademark dog, with toppings that are unique and renowned. For example, Ben's Chili Bowl in Washington, D.C. doesn't just have a trademark frank (the half-smoke), it has a trademark topping (chili), is well-regarded by locals and professional eaters alike, and eating there is a memorable experience unto itself. For those reasons, it's high on our list.

Sadly, there were some popular favorites that didn't make the cut. While Lafayette Coney Island in Detroit ranks high, its modernized neighbor, American Coney Island, didn't, because it lost much of its charm in the renovation. And while the pretzel dog at chain Auntie Anne's has its loyal devotees, the experience isn't exactly sublime.

Our list runs the gamut from ancient stands that have been serving the same exact product day in and day out for decades to gastropubs putting their unique stamp on the hot dog to a place where people wait in line for more than an hour for one topped with foie gras. There's one constant thread between them, though: they're the country's best.