Typically, the discussion around U.S. economic inequality focuses on the growing disparity between incomes. However, another measure of inequality, one which may be more important, has gone largely overlooked outside of academic circles: wealth inequality.

Here are some charts to help put American wealth inequality in perspective.

Income inequality: the top 1% earn as much as the bottom 40% 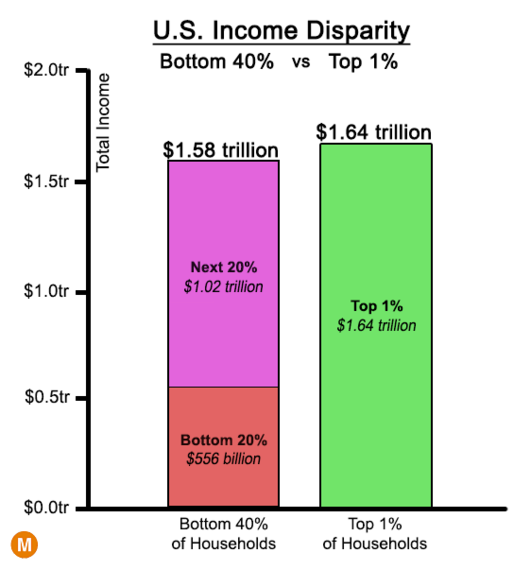 The top 1% of U.S. households earn as much annual income as the lowest-earning 40%. Pretty striking!

But is income really the best way of measuring economic inequality?

Income represents something very specific, the amount of money a household earned in a given year. It does not account for the variability of a household's income over time.

If what we're trying to measure is a household's overall financial well being, it would seem more useful to look at the amount of money that household actually has, household wealth.

Here is a chart showing the extent of U.S. wealth inequality. For comparison, it is shown side-by-side with the income inequality chart from above.

Wealth inequality is over 100 times worse than income inequality 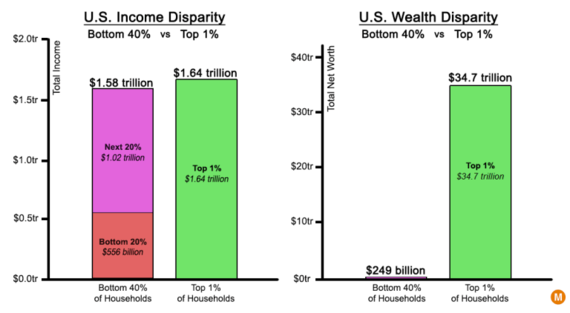 According to a 2014 report by the National Bureau of Economic Research, the wealthiest 1% of U.S. households own about 42% of the country's wealth.

On the other side, the share of wealth owned by the bottom 40% of U.S. households amounts to just 0.3%.

Measured in these terms (bottom 40% vs top 1%), the U.S. wealth disparity is over 100 times bigger than the income disparity.

Here is one more chart that further illustrates the extent of America's wealth inequality.

America's 4 wealthiest households own as much as the bottom 40% 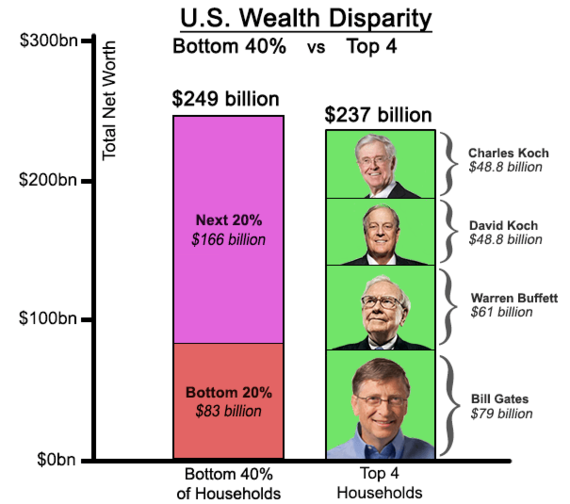 The bar on the left includes about 128 million people. Their combined net worth is matched by the wealth of only 4 U.S. billionaires, Bill Gates, Warren Buffett, and the Koch Brothers.

Is this an indictment against Bill Gates?

No, not at all. The world would be a very different place if it weren't for entrepreneurs like him. And on top of it, he is now using his money to help others.

The problem is not with billionaires, but with a system that has been skewed to favor the wealthy at the expense of everyone else.

As highlighted by Nobel laureate Joseph Stiglitz, who I had the pleasure of meeting last year, the costs of economic inequality are high. And they extend far beyond the simple economics of household spending.

There are many costs to this lack of opportunity. A large number of Americans are not living up to their potential; we're wasting our most valuable asset, our talent. As we slowly grasp what's been happening, there will be an erosion of our sense of identity, in which America is seen as a fair country. This will have direct economic effects--but also indirect ones, fraying the bonds that hold us together as a nation.