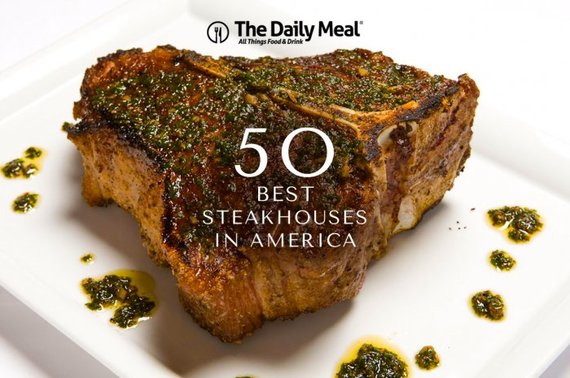 Love a good steak? Then these shrines to meat should be on your list.

From grand Las Vegas carnivore temples helmed by world-famous chefs to old-school Middle-American chophouses where a ribeye is preceded by a visit to the salad bar, from clubby Chicago dining rooms loaded with mahogany and brass to New York institutions with now-household names, America has no shortage of great steakhouses. These are the 50 best.

We're lucky enough to live in a country that has more varieties of steakhouses (and restaurants in general) than previous generations could have ever imagined. There are the cavernous Wild West establishments where everyone seems to be wearing a Stetson and a pair of Lucchese boots; the power-broker-with-an-expense-account clubhouses; the joints that serve steak at the bar but don't quite fall into the bar-and-grill category; and the modernist steakhouses that turn all these conventions upside down. All types of steakhouses are included in our ranking of America's best.

The best steakhouses in America are places of worship built to honor the deceptively complex art of a perfectly cooked steak. Whether they're clad in red leather or plywood, décor is only one aspect of the overall steakhouse experience. When it comes down to it, it's all about the steak. From ripping-hot broilers to mesquite grills, these restaurants do it right.

To assemble our third annual ranking of the best steakhouses in America, we started by compiling a list of more than 200 of America's leading examples, culled from pre-existing rankings by leading authorities both in print and online, and also based on suggestions from chefs and restaurateurs from across America. For the sake of fairness, we excluded chains with more than a few locations, like Capital Grille, Fleming's, and Smith & Wollensky. We also barred restaurants that don't focus primarily on steaks, such as San Francisco's House of Prime Rib (prime rib is technically a roast, not a steak). Ethnic steakhouses, like Brazilian churrascarias, were also left out since they form a category of their own.

We then judged them according to strict criteria: Is the meat sourced reputably and USDA Choice or Prime? Is it dry-aged, and if not, is it as high-quality as can be? Is it served at the proper doneness without fail and with a touch of ceremony? Is it revered by locals and out-of-towners alike? We also considered the overall steakhouse experience. No matter the setting, the service must be top-notch, the attention to detail should be spot-on, and diners should feel compelled to sit back in their chair after their meal, pleasantly stuffed and content in the knowledge that they just ate one heck of a steak.

So journey with us to a fabled dining room on a ranch in a small Texas town (Perini Ranch), a Tampa legend with seven different cuts in 51 sizes and a 7,000-bottle wine list (Bern's), Las Vegas palaces run by the likes of Batali and Jean-Georges, a New York spot that's famous for its steaks and infamous for a mob hit (Sparks), and everywhere in between on our quest to find the 50 best steakhouses in America. 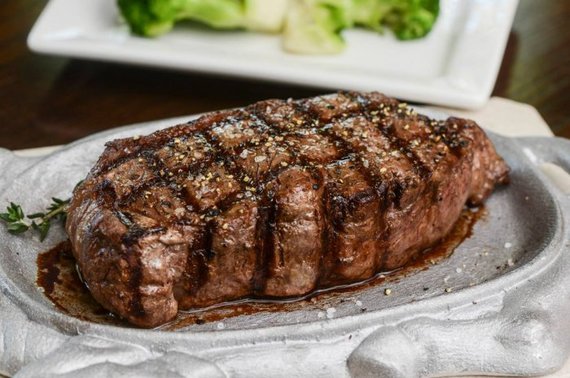 This Houston landmark, opened by Nina and Edd Hendee in 1977, is part restaurant and part museum of Texas history. Artifacts on display include Sam Houston's calling card, the signatures of Alamo heroes Davy Crockett and William Travis, and a 1911 Colt .45 (once stolen off the wall, but later returned) -- and the steaks make it clear that this place is no gimmick. This was the first restaurant in Texas to serve certified Angus beef, available in such popular cuts as prime rib (available in sizes from 10 to 24 ounces) and ribeyes cut to order by the restaurant butcher shop -- or served as a 38-ounce tomahawk steak -- all dry-aged for aged a whopping 35 to 42 days. You haven't truly experienced Houston until you've visited Taste of Texas. 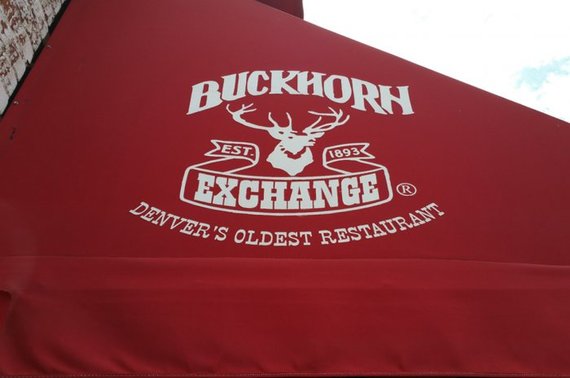 One of America's oldest restaurants (and the oldest in Denver), the Buckhorn Exchange was opened by Henry "Shorty Scout" Zietz opened in 1893, an era when cattlemen, miners, railroad workers, silver barons, Indian chiefs, drifters, and businessmen all dined under the same roof. The restaurant was given the first liquor license in the state of Colorado and the menu remains mostly unchanged to this day. The Buckhorn is a true Wild West holdout, with its circa-1857 antique bar, wooden fixtures, 575-piece taxidermy collection, 125-piece gun collection, and a menu that reflects that good ol' American desire to eat some red meat. For those who really want to celebrate being on top of the food chain, there are plenty of exotic meats on offer, including elk, quail, and buffalo (and sometimes ostrich and yak). But if you're in the mood for UDSA Prime steak, we suggest you go for The Big Steak, a New York strip loin carved tableside and available for two (two pounds) to five (four pounds) guests. 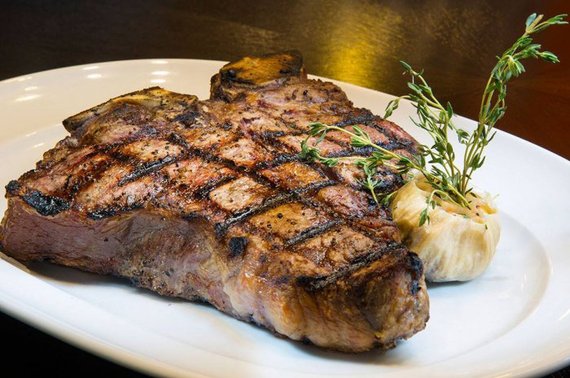 Intimate, sleek, and sexy, Oliver's is everything you'd expect from a Sunset Boulevard steakhouse, and even though it's only a year and a half old, it's already making its mark on L.A.'s steakhouse scene. Chef Greg Elkin serves a fun menu including house-cured pork belly; an impressive burger topped with Brie, fried onions, and green peppercorn aïoli; beef from Creekstone Farms; and bison filet from Wyoming's Durham Ranch. The New York strip and porterhouse for two, which are aged for 35 days, are among the finer steaks you'll find in Los Angeles. 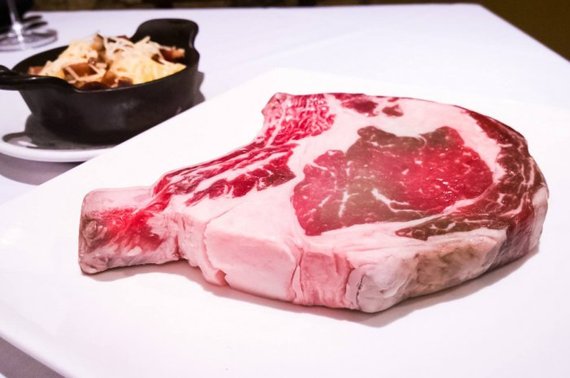 Richard Chamberlain -- the chef, not the actor -- opened this classy Texas meat emporium in 1993, and the place has thrived ever since. Unconventionally for a steakhouse, the appetizer lists includes such exotica as sweet potato soup with spiced almonds and maple mascarpone; lobster deviled eggs with caramelized bacon and chive cream; and crisp duck "cigars" with smoked cheese fondue and green chile salsa. But there are also 18 different steaks and chops (counting various sizes and sauces), from a six-ounce filet mignon to a 10-ounce American-raised Kobe New York strip, as well as some seafood choices, half a dozen salads (the baby iceberg with bacon, tomatoes, onions, and creamy blue cheese dressing is a classic), and a dozen-plus side dishes ranging from wild mushroom mac and cheese to Vermont Cheddar steak fries to crispy Brussels sprouts. If you go home hungry from Chamberlain's, you're just not trying. 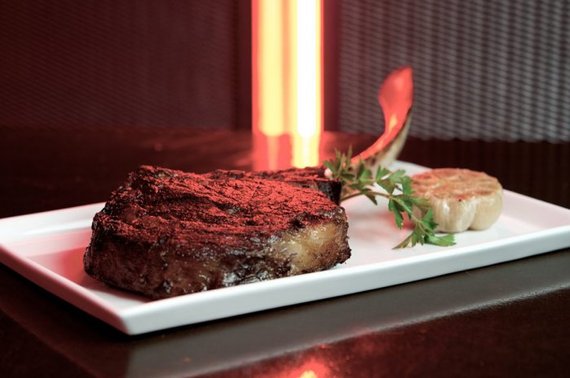 This OKC must-visit is where locals go when they're looking for a hip and high-end experience, and it certainly delivers. The space is stylish and swanky with 18-foot ceilings and concrete floors; the red lighting gives everything a surreal glow. As for the food, steaks are dry-aged for 40 days, and each one comes with your choice of seven crusts (including garlic herb, guajillo chile, and brown sugar and sea salt) and seven sauces (including brandy mushroom, roasted poblano chimichurri, and black truffle butter). There are plenty of possibilities, so you'll want to return again and again to try them all. 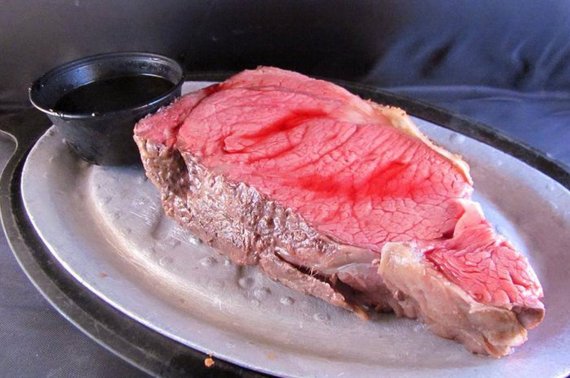 In a town known for great steak, Jess & Jim's stands apart from the pack, and did so even before Calvin Trillin put it on the map in 1972, when he named it one of the country's best steakhouses in Playboy. Family owned and operated since 1938, this no-frills, casual steakhouse is no pomp and all steak. The beef is from Wichita-based Sterling Silver, and is hand-cut daily (trimmings are ground into meat for world-class burgers). It's served completely seasoning-free, all the better to taste the meat in its unadorned glory. You could go for the KC strip, a cut that this restaurant helped to popularize, but you might as well go all out and order the "Playboy Strip," named in honor of the publication that helped make this place famous: a two-inch-thick, 25-ounce sirloin. Save room for the twice-baked potato. 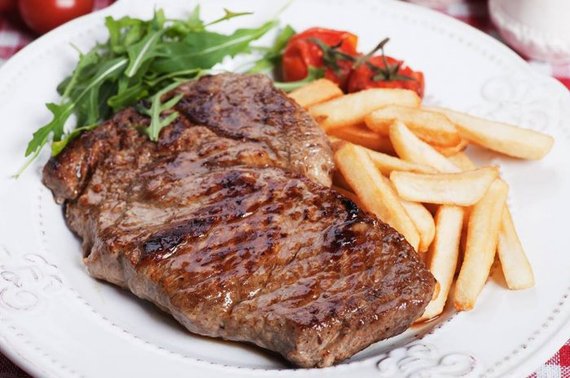 One of the last remaining reminders of the days when New York's Meatpacking District was still an actual meatpacking district, The Old Homestead has been serving steaks to hungry New Yorkers since 1868 and is still going strong. Owners Greg and Marc Sherry have built relationships with local suppliers who provide them with some of the finest cuts you'll find anywhere, and they take it one step further by dry-aging them for up to 40 days. Offerings include a top-selling center cut sirloin; rib steak and filet mignon on the bone; and prime rib, porterhouse, or rib steaks for two. Japanese Kobe steaks are also available for high-rollers who can fork over $350 for a 12-ounce steak, and their $43 20-ounce Kobe burger is one of the most opulent burgers you'll ever encounter.