Cities have been pivotal role to improved living standards, because of the opportunities they facilitate. This is particularly evident over the past two centuries, as world urbanization has risen from 3 percent to over 50 percent, and to more than 80 percent in the United States.

The prosperity of urban residents depends in large measure on their ability to reach the best available jobs in the city in a reasonable period of time. This requires access. University of Paris economists Remy Prud'homme and Chang Woon Lee and others have shown that cities tend to perform better economically if the transport system permits more jobs to be reached in a fixed time, such as 30 minutes. Cities are defined as metropolitan areas, which include core municipalities and suburbs. As former World Bank planner Alain Bertaud has indicated, "large labor markets are the raison d'être of large cities."

With frequent press attention on traffic congestion and "gridlock," it may be surprising that work trip travel times in US cities are better than those of high income competitors in other nations (See Table). Indeed, the University of Minnesota's David Levinson, found that the typical employee can reach two-thirds of jobs in major US metropolitan areas within 30 minutes. 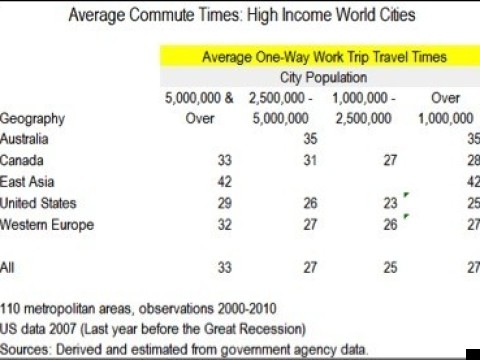 A number of examples can be cited. For all its well known traffic congestion, Los Angeles has the shortest travel time of any high income world megacity (cities over 10 million population), at just 27 minutes. Paris and New York are the strongest competitors, at 34 minutes, while Tokyo's 50 minutes is nearly double that of Los Angeles (estimated from travel time distributions reported by the Japan Statistics Bureau).

Dallas-Fort Worth is the best performing US city between 5 million and 10 million population, at 26 minutes. Travel time in Houston, Miami and Philadelphia is almost as short, at 27 minutes. Only the Germany's Ruhr Valley (Essen-Duisburg-Dortmund) does better than these cities, at 24 minutes. Hong Kong's travel time is the longest in this population category, at 46 minutes. This may be surprising, since in many ways Hong Kong conforms to current urban planning ideals. It is the densest urban area in the high income world and the largest transit work trip market share.

Why are US cities so accessible? Despite the hostility of planners toward the automobile, the secret lies in automobile access. Generally, automobiles are faster than other modes, such as transit, walking and cycling for trips of the lengths required in modern metropolitan areas. The US also has more dispersed (decentralized) employment, which increases access and shortens travel times. Only 8 percent of major metropolitan area employment is in the downtown areas (central business districts) in US cities. Similar factors account for the Ruhr Valley's quick travel times in Germany, with unusual employment dispersion and comprehensive freeway coverage (for Europe).

By contrast, nearly half the population and half of the jobs are in pre-1980 suburban areas (not the urban core), according to my analysis of zip code data. This makes more employment closer to people throughout the metropolitan area, on generally less congested roads.

Meanwhile, cars are getting cleaner. The Department of Energy forecasts the new US (and Canadian) fuel economy standards will reduce gross greenhouse gas emissions a quarter by 2040, despite a strong increase in driving and a conservative assumption of no progress in new car emissions after 2025. Yet things are likely to get much better, with groundbreaking advances by manufacturers, automated vehicle developers and government agencies. The California Air Resources Board is aiming for a statewide fleet that emits zero emissions by 2050, on the way to 100 percent.

Superior access is one reason that US cities dominate international income rankings. Access to greater employment choices is good for metropolitan economies. The result is a higher standard of living and less poverty than would otherwise be the case.