Remember Howard Beale? Played by Peter Finch in the movie Network (1976), the deranged former TV news anchor Beale tries to generate a social movement by admonishing viewers with a simple sentiment: "I'm mad as hell and I'm not going to take it anymore!" Three decades later, there are still a host of Americans who feel mad as hell, and who are refusing to take it anymore.

Like Beale, a lot of them feel blindsided by history, and their rage is turned outwards, towards scapegoats and unseen forces, but rarely, as in the film, at the cynical elites who profit from Beale's descent into madeness.

And, like Beale, a lot of the current crop of the outraged are a lot of white men. Not all of them, of course. There are plenty of angry men of color and plenty of angry white women. Just look at those Tea Party rallies! But as a political movement, as the rank and file of America's fulminators -- whether the Tea Party or organizations on the extreme right wing, or the guys, always guys, who open fire on their classmates at school or their co-workers and colleagues at work, or the men, almost always men, who beat and murder those they claim to love, or the young men, always young men, who walk into movie theaters of places of worship with guns blazing -- well it's pretty hard to deny that they're virtually all white men. (And let us be clear: just because virtually all these cases are middle- and lower-middle class white men, does not for a nanosecond mean that all white men are crazed killers or white supremacists. All members of the Mafia may be Italian, but not all Italians are members of the Mafia.)

Yet deny it we do, often by assuming that these outbursts are motivated by anything at all -- mental illness, access to guns, video games, whatever -- other than gender. We'd notice, of course, if it were poor black girls pulling the triggers in school shootings, or women who walked into their workplaces with semi-automatic guns firing, or all Asians or Jews or Latinos who were shooting up our movie theaters and political rallies. But white men? Must be some other factor.

It seems so obvious, and yet so startling to see middle-class white American men, arguably the most privileged human beings on the planet (excluding, of course, hereditary aristocracies and the upper classes) fuming with such self-righteous outrage. (The comedian Louis CK gets this sense of privilege: "I'm a white man," he says, "How many advantages can one persona have?"

So, to research my book, Angry White Men, I traveled the country and interviewed scores of these guys -- from "men's rights" activists who think white men are the victims of the new discrimination, to the "white wing" on the rightward fringes of the American political spectrum, who believe they are watching "our" country being snatched away from them.

What unites them, I came to understand, was a sentiment I called "aggrieved entitlement." Raised to believe that this was "their" country, simply by being born white and male, they were entitled to a good job by which they could support a family as sole breadwinners, and to deference at home from adoring wives and obedient children. And not only do their kids and their wives have ideas of their own; not only is the competition for those jobs increasingly ferocious; they've also been slammed by predatory lenders, corporate moguls, Wall Street short-sellers betting against their own companies and manipulated by cynical elites into believing that their adversaries were not the ones downsizing, outsourcing and cutting their jobs, but those assorted others -- women, immigrants, gays, black people -- who were asserting their claims for a piece of the pie. The middle class white American man expected to be more Don Draper, all self-made , in control, and upwardly mobile. Instead he's more like William Foster, another fictional character who's fallen off the cliff into that dark abyss of despair, violence and madness.

Today's Angry White Men look backward, nostalgically at the world they have lost. Some organize politically to restore "their" country; some descend into madness; others lash out violently at a host of scapegoats. Theirs is a fight to restore, to reclaim more than just what they feel entitled to socially or economically -- it's also to restore their sense of manhood, to reclaim that sense of dominance and power to which they also feel entitled. They don't get mad, they want to get even -- but with whom?

Alas, that multicultural, democratic train has long ago left the station; it's impossible to imagine America rolling back the gains made by women, LGBT people, immigrants, people of color. Angry White Men may still strew some obstacles on that global path to greater equality, making the road bumpier. But its direction is clear. And the loudest screams are coming not from those whose fortunes are rising, but from those over whom the engines locomotives of history are rolling.

Here, then, is a gallery of some of the more prominent angry white men, both real and fictional. Each represents a different expression of that aggrieved entitlement; they are not a coherent and unified movement, and most of these men do not know each other nor recognize the others as fellow travelers. They are, instead, isolated Howard Beales, some with huge followings, to be sure, shouting into a strong headwind. The past may have been theirs, but the future belongs to others. 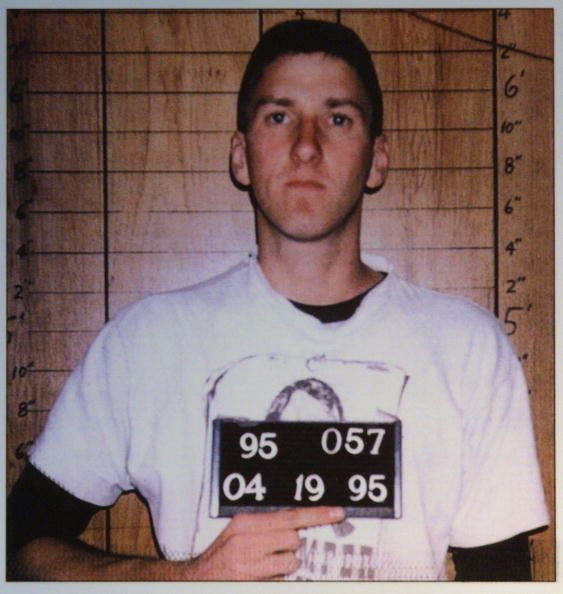 1 / 15
Timothy McVeigh (1968-2001)
Son of a union worker in the auto industry in Lockport, New York, McVeigh found his calling in the military during the First Gulf War. Failing to be admitted to the Special Forces, McVeigh drifted into the anti-government extreme right wing. “The American Dream,” he wrote in a letter to his hometown newspaper, “has all but disappeared.” On April 19, 1995, he detonated a truck bomb in front of the Murrah Federal Building in Oklahoma City, killing 168 people and wounding over 600 more -- the worst act of domestic terrorism in U.S. history.
Getty