The hot dog is one of those foods that's nearly impossible to screw up. You heat it through, plop it on a bun, squirt on some mustard, and call it dinner. But there's a big difference between not screwing something up and turning it into a paradigm-shifting, transcendental dining experience. And there are lots of hot dogs out there that have the power to change your life.

Click Here to see All of America's 50 Best Hot Dogs

The perennial grill mate to hamburgers, the hot dog sometimes gets the short end of the stick, charring at the back of the grill while juicy burgers are snatched up as soon as they hit the right temperature. But there's a science, if not an art form, behind constructing the perfect hot-dog-eating experience.

That experience was introduced more than 100 years ago, when German immigrants first brought over their frankfurters and started selling them on the cheap, at places like Coney Island's Nathan's, arguably ground zero for American hot dog consumption. But then something interesting happened. People began developing their own spice mixes and making their own hot dogs, and every region and group of people put its unique stamp on the snack. In Chicago they top all-beef dogs with mustard, fresh tomatoes, onions, sport peppers, bright green relish, dill pickles, and celery salt. Spicy Texas Red Hots are popular in New Jersey, but not in Texas, while Greek immigrants in Michigan concocted a cinnamon-rich beef chili that came to be known as Coney sauce, but it has nothing to do with Coney Island. The uncured, unsmoked White Hot is popular in upstate New York. And the regional variations go on and on.

On our quest to find America's best hot dogs, we kept an eye out for places with a definitive style of hot dog, one which embodies not only the region's quirks but the particular tastes and culinary traditions of its people. We also made sure to take into account online reviews from locals as well as the dog's overall reputation among those in-the-know, and the quality of the ingredients, namely sourcing the franks from well-known local producers, was also important. These hot dogs aren't being eaten in a void, either, so we took into account the entire experience, from driving up to the restaurant or stand to placing your order to taking that first bite.

We sorted through dozens of hot dog stands and restaurants in search of the best in America. In order to be included, the vendor needed to have a trademark dog, with toppings that add a certain extra something. For example, Ben's Chili Bowl in Washington, D.C. doesn't just have a trademark frank (the half-smoke), it has a trademark topping (chili), is well-regarded by locals and professional eaters alike, and eating there is a memorable experience unto itself. For those reasons, it's high on our list.

Sadly, there were some renowned institutions that didn't make the cut. While the original Nathan's Famous in Coney Island very well might be the most well-known hot dog stand in America, it didn't make our cut because the buns have been stale every time we've eaten there and it's sadly resting on its laurels at this point (even though the fries are admittedly delicious). And while the pretzel dog at chain Auntie Anne's has its loyal devotees, the experience isn't exactly sublime.

Our list runs the gamut from ancient stands that have been serving the same exact product day in and day out for decades to gastropubs putting their unique stamp on the hot dog to a place where people wait in line for more than an hour for one topped with foie gras. There's one constant thread between them, though: they're the country's best. 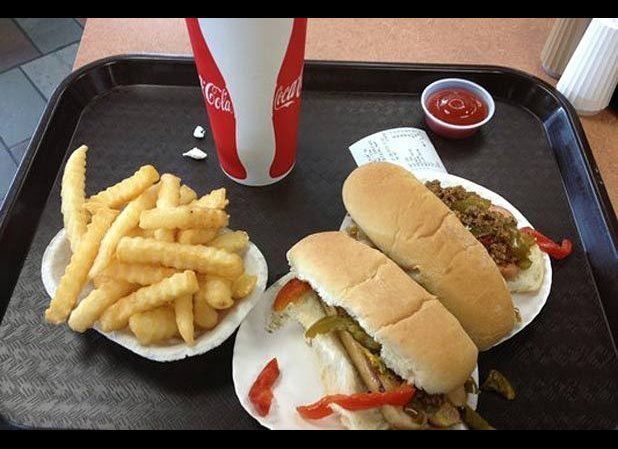 A Rochester, N.Y., institution, folks come for the nostalgia and stay for the timeless fries, hamburgers, and hot dogs. It opened in 1956, so that distinct Happy Days atmosphere is in fact purely authentic. Located right on the water, Schaller’s specialty is the upstate hot dog variety known as White Hots, fat natural-casing dogs made from pork, beef, and veal, made by Zweigle’s. Top it with some of their meat-based "hot sauce," mustard, and onions, grab a handful of pickles, and you’re in summer vacation heaven. Two other locations have since opened, but the lakeside location is the one to visit. Photo Credit: Yelp/Pete AClick Here to See All of America’s 50 Best Hot Dogs
2
4) Hot Doug’s, Chicago: Foie Gras and Sauternes Duck Sausage 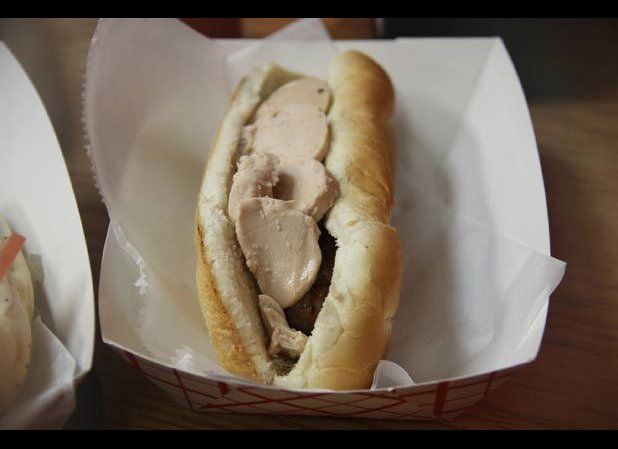 When Hot Doug’s first opened at its original location in Roscoe Village in 2001 (it moved to its current spot in 2004 after a fire), there were people who doubted its owner Doug Sohn’s vision of a menu limited to hot dogs and sausages — even Sohn’s own family. "My brother told me, 'Don’t you think you’ll have to sell hamburgers?'" Sohn related in an interview, adding, "I have it on very good authority that the people at Vienna gave me a few months. They came in and they were like, 'Well, this isn’t gonna last.'" Now? Along with Doughnut Vault, Hot Doug’s is probably Chicago’s most famous line for food, and the entire city let out a collective audible gasp when word spread earlier this month that it would be closing its doors for good in October. While its main menu is delicious, its items can be replicated elsewhere. The specials’ flavors and ingredients, however, differentiate Hot Doug’s. The normal menu ranges in price from $2 to $4 per order and the special sausages are $6 to $10. It is the type of place where you extend yourself monetarily and calorically because you don’t know when the next time will be that you will be able to carve out hours for lunch on a weekday or Saturday to soak up the experience. The signature order here of course, is the foie gras and sauternes duck sausage with truffle aioli, which garnered quite a bit of press in 2006 following the banning of foie in Chicago. Defying the ban pushed by chef Charlie Trotter and Alderman Joe Moore, Sohn named the dog after Moore, was fined, but was ultimately victorious when the ban was repealed in 2008. It’s a brilliant pairing — the snap of the dog against the creaminess of the foie — a visionary move celebrated by gout-defying offal lovers everywhere. While we’ll miss Hot Doug’s, we’re sure that wherever Sohn ends up next, Chicagoans will be lining up behind him. Photo Credit: Arthur Bovino
3
3) Rutt’s Hut, Clifton, N.J.: The Ripper with Relish 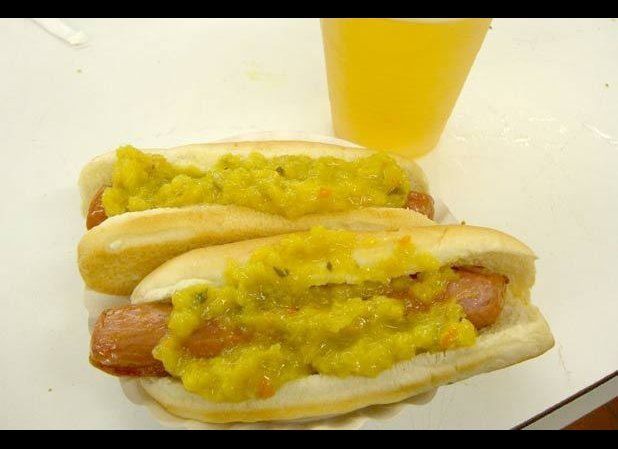 Clifton, N.J., served their trademark Ripper, a pork-and-beef Thumann’s link that’s deep-fried in beef fat until it rips apart, out of the back of a minivan, it would still be one of the country’s most delicious hot dogs. The fact that this roadside shack has not only a counter to end all counters amid its stand-up dining room, but also an adjoining tap room where you can drink cheap beer and chat with old-timers and fellow pilgrims, propels Rutt’s Hut to legendary status. Whether you order an "In-And-Outer," (just a quick dunk in the oil), a Ripper, a well-done "Weller," or the crunchy, porky, almost-overcooked "Cremator," make sure you get it "all the way," topped with mustard and a spicy, sweet, onion- and cabbage-based relish. Photo Credit: © Flickr / Brouhaha (Jonathan)Click Here to See All of America’s 50 Best Hot Dogs
4
2) Katz’s Deli, New York City: Mustard and Sauerkraut 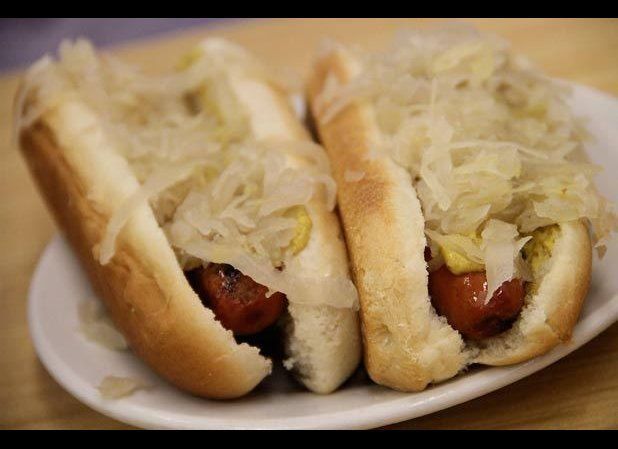 Katz's Deli, on New York's Lower East Side, is a New York institution. Their corned beef and pastrami, made on-premises and sliced to order, are legendary, and the simple act of taking your ticket, standing in line, bantering with the counterman while placing your order, and finding a table has become as New York an exercise as, well, eating a hot dog with a smear of mustard and a little sauerkraut. And it just so happens that the hot dogs here are very good. Made especially for the restaurant by Sabrett, these garlicky, natural-casing, jumbo-size all-beef dogs spend such a long time on the flat-top grill that the outside gets a nice char and snaps when you bite into it. A smear of mustard is all that's needed, but a little sauerkraut or stewed onions certainly won't hurt. Photo Credit: Arthur Bovino
5
1) Fat Johnnie’s Famous Red Hots, Chicago: Mighty Dog 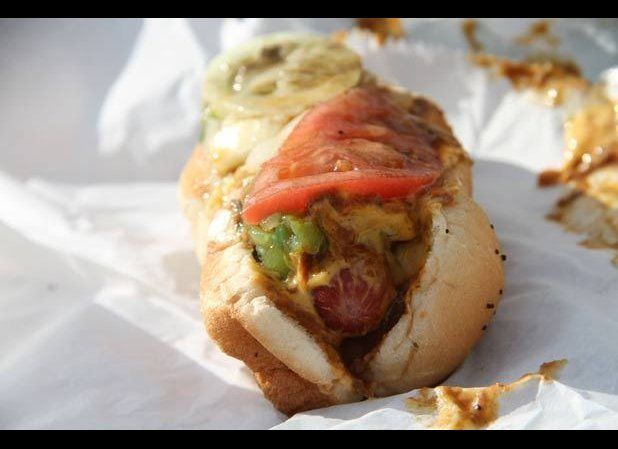 The number one hot dog spot on this list is admittedly a bit of a sleeper, one that some Chicagoans might even do a double-take at. It’s a small, ramshackle, white-paneled hut that’s just a bit taller and just a bit wider than a canoe, on an industrial stretch of Western Avenue, a 20-minute drive from The Loop. You order through a tiny window in wonderment at how someone can fit inside the shack, after looking over a menu that includes amazing named items like the "Mother-in-Law" (a tamale on a bun with chili), a "Father-in-Law" (tamale on a bun with chili and cheese), and a tamale sundae (a tamale in a bowl of chili). If you’re noticing the tamale trend here, you might see where this is going. As every Chicago hot dog lover knows, hot dogs and tamales go hand in hand at many of the city’s storied spots (though they’re frequently not the best thing on the menu). Not so at Fat Johnnie’s Famous Red Hots where John Pawlikowski serves the Mighty Dog — a hot dog and tamale on a bun with chili and cheese. Sounds like a monster, right? You’re right to be scared, it’s a mess. You want tomato, sport peppers, relish, and pickles on that? You bet you do. Soft steamed bun, moist tamale, fresh snap of the dog, chili, cheese, and a slice of cucumber sliced on the bias — it’s one of the best hot dogs you’ll ever have. Johnnie is celebrating 41 years this month. Go wash down a Mighty Dog with a Suicide (cola, fruit punch, grape soda, lemonade, orange, root beer, 7-UP, and strawberry soda) to celebrate. Photo Credit: Arthur BovinoClick Here to See All of America’s 50 Best Hot Dogs

30 Hot Dogs From Around the World

10 Unique Hot Dog Toppings From Around the World

The Best (and Worst) Hot Dogs to Buy