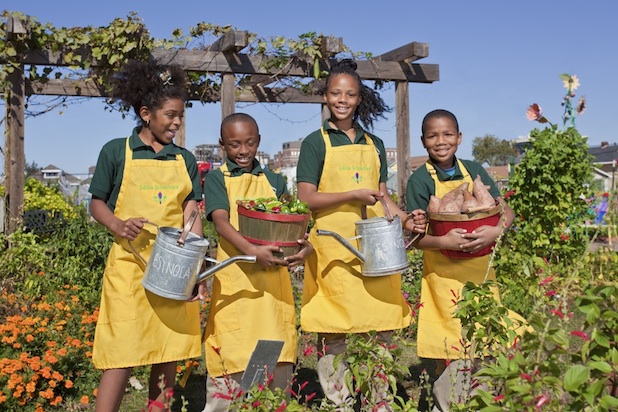 Ask a group of school kids about "mystery meat" and they may have no idea what you're talking about, not if they're on the feeding end of national and local efforts to transform school lunch programs. A genuine movement is afoot at schools to create better, more nutritional meals for kids using produce from local farmers, and in many cases, from gardens the students help create and maintain themselves.

Forty-six states now have farm-to-school programs, many of which are bearing fruit. More than a million school-age children in New York City's public schools are eating four times the amount of apples than they ever have because of a new partnership with local apple producers. In Chicago, 300,000 kids in public schools eat locally-produced vegetables in school lunches year-round. And in Atlanta, 81,000 students in the public school system will soon enjoy the gardens being planned for each school, and a wellness curriculum that integrates their harvesting.

And to the cheers of many farmers and families, on December 13th, President Obama signed into law the Healthy, Hunger-Free Kids Act of 2010, which expands federal funds for school lunches and designates $40 million to farm-to-school initiatives. These programs require local innovation and collaboration, not just between farms and schools, but between state agencies, non-profits, and community volunteers (depending on how they are funded).

Michelle Ratcliffe, Farm-to-School Program Manager for the Oregon Department of Agriculture, emphasized that the movement is about more than switching ingredients. "Procure, promote, and educate," she said, "It's not enough to have local produce if the kids and the parents don't know about it."