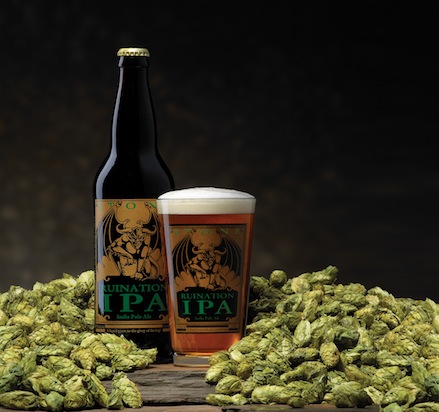 Back in the '80s, Keystone Light commercials focused on a curious affliction: bitter-beer face. The faces of folks who sipped so-called "bitter beer" scrunched up like sideshow freaks. "Don't grab a bitter beer... grab a better beer!" the announcer exclaimed, as a swig of innocuous Keystone made their normal expressions bounce back.

But in this era of craft beer, drinkers are shunning simple brews like Keystone and Coors for coffee-seasoned stouts, burly Belgian ales and, most of all, bitter beers like the India Pale Ale, a.k.a., the IPA. According to lore, the IPA is so-called because eighteen- and nineteenth-century sailors alighted from England to India with pale ales fortified with with extra doses of hops -- a climbing plant's fragrant flowering cones that act as preservatives and impart bitterness.

Yet on the international stage, 168 IBUs is merely a stepping stone. Dutch brewery Mikkeller offers the eye-popping 1000 IBU -- a theoretical number, given that the bitterness doesn't sky that high. Despite the wishful thinking, this beer still "tasted like chewing on a hop field," wrote brewer Mikkel Borg Bjergsø. "I personally loved it." Would you? Give these American-made IPAs a taste to see if you too subscribe to the "bitter is better" school of thought.

More stories from The Daily Meal:
Best of the Vintage Beer Commercials
5 Beer Bottle Opener Alternatives
8 Exclusive Beer Sommelier Restaurants
What Brew Is Right For You?