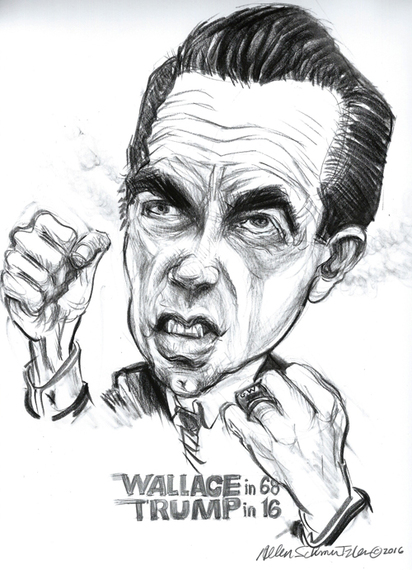 I know you remember helping me understand the hateful and degenerate politics of Democrat George Wallace and how laughable we found his presidential aspirations in 1968. In our hearts we knew Americans were looking into the future and would never vote him into the White House and therefore we were able to check our loathing fear of him. We knew he represented a dying breed of politicians.

Well, mom and dad I must apologize, but at your current age of 87 and 93 respectively, I need to be your adult now. I need to protect you like you did for me when I was too young. I need to protect you against today's "pornolitics" and lock you out of the political news channels on your television. The content may be dangerous to your health, sense of security, sense of decency, fairness, and further erode your coming-of-age-during-Hitler-paranoid-view-of-humanity. George Wallace looks like the Wizard of Oz compared to today's Republican presidential line up. As it is, I can barely take it, and I am a cynical counter-culture anti-establishment baby boomer.

You are the last generation of "media-innocents," pre-cable, pre-digital and still land-locked by landlines. For you, Perry Mason and Lawrence Welk are not re-runs but prime time. Social media to you is a Monday afternoon of popcorn and a Bingo game in the dining room at your care-assisted living residency. There is nothing to be gained by allowing you to be "fornitrumped" by exposing you to the digital pornographic feast on Twitter and beyond, where "blood comes out of everywhere" as if it was a cage fight of Thundersome dynamics "two in, one out," with grown men "testosteroning" over the size of their hands and lust-worthiness of their wives and daughters as credentials for the presidency, while as the same time proposing to punish women who want to control their own bodies.

These same wannabes have promised that on day one as President they will deport millions living here whom have become their 21st Century "interlopers," and police their communities as we have never seen in America. People that live beyond the watchful lens of your facility's surveillance cameras are too hungry for political change of any kind, and too angry for a "Mr. Rogers drives Mr. Smith to Washington" approach.

Politics is now a bona-fide blood sport supported by cage-fight debates and political rallies too dangerous for dissent and folks of color. This year's presidential contest is a Mad-Max road trip, with whoever wins quickly discovering the keys cannot unlock the gridlock and that vacations in Baghdad's Green Zone may be safer than a President's visitations to Congress.

Mom, dad, in my simplest language, this election cycle has cycled even seedier than Nixonian, beyond what most of us imagined possible, and I feel so horribly soiled by it that even my Dr. Bronner's Magical Soap that I have been using ever since the first Woodstock cannot clean me.

This is the first time since the Kent State University massacre of unarmed students, that the bitter, sour, salty tearful taste in my mouth for government is causing me symptoms of physical illness. I find myself in a state of anxious grieving as the hopeful lights from your generation's sacrifice darken along with the hopeful spirit that government does matter. Our country is on the verge of losing so much.

I want you to feel secure as possible at this stage of your life. You do not deserve nightmares or night terrors or worries about Republicans destroying your world. No, you did not lose those channels on your remote control, rather, just like in "Mission Impossible," I self-destructed it to protect you.