There is a general perception that the densest US cities are in the Northeast, where downtowns tend to be bigger and inner city densities are higher. However, cities have become much larger geographically, and also include the automobile oriented lower density suburbs that have developed since World War II. In fact, most of the densest major urban areas are in the West.

Since 1950, each decennial census of the United States has defined urban areas, or, areas of continuous urbanization. Urban areas include core cities (municipalities, such as the city of New York or the city of Boston) as well as adjacent suburbs.

Urban areas do not correspond to city limits or jurisdiction borders. They are composed of small census districts that average fewer than 50 residents and can cross state lines. Metropolitan areas, which are often wrongly used interchangeably with urban areas, are based on county boundaries and always contain rural areas. So, metropolitan area densities are a useless statistic for urban density analysis.

This article ranks the densities of the largest urban areas (cities) in the nation's 52 metropolitan areas with more than 1,000,000 population.

Despite its international reputation for endless urban sprawl, the densest major city is Los Angeles. Los Angeles covers one-half the land area of New York, with two-thirds the population (12.2 million). With an area of 1,736 square miles, Los Angeles has an urban density of 6,999 per square mile. The urban core of Los Angeles is much less dense than New York, but the suburbs (where most people live) are twice as dense.

Six urban areas are geographically larger than Los Angeles. These include New York, Atlanta (2,645 square miles), Chicago (2,443), Boston (1,873), Philadelphia (1,981) and Dallas-Fort Worth (1,779). Among these, Boston is reputed for its high density urban core. But because of its very low density suburbs, Boston is less than one-third as dense as Los Angeles and less dense than cities perceived to have lower density, such as Phoenix and Houston. (For complete information on urban area, core municipality and suburban, see here.)

Balance of the Top Ten

San Francisco is the second densest city, at 6,266 per square mile. San Francisco has a dense urban core like New York. But more of San Francisco looks like Los Angeles than New York. Its suburbs are 50 percent more dense than those of New York.

San Jose ranks third, with an urban density of 5,820. Yet, even with virtually no pre-automobile urban core, San Jose is more dense than New York. This is because its all-suburban urban form is dense enough to erase the effect of New York's hyper dense urban core.

Las Vegas ranks fifth (after New York), with a density of 4,525. Las Vegas was too small to be a metropolitan area in 1950, and like San Jose is composed of virtually all post-war suburban development.

Miami ranks sixth, at 4,238 , with a higher core density and higher density suburbs.

The bottom ten includes seven southern cities, two from the Northeast and one from the Midwest. Their densities range from 1,414 in Birmingham to 2,031 in Grand Rapids. The bottom ten also includes Charlotte, Atlanta, Raleigh, Nashville, Hartford, Pittsburgh, Richmond, and Jacksonville.

Interestingly, the Hartford metropolitan area has the highest gross domestic product (GDP) per capita in the world, according to data in the Brookings Global Metro Monitor, which is counter to the perception that associates stronger economic performance with higher urban densities.

Thus, only one Northeastern city ranks in the top ten (New York) and none are from the Midwest. Seven of the top ten are in the West, with five in California and two more from the Intermountain West. Two more are from the South. However, two western cities that have among the strongest urban containment policies (densification policies), Seattle and Portland are not among the top ten in density.

Since World War II, nearly all of the nation's urban growth has been in suburban areas. Most of this growth has occurred in the West and South, rather than in the Northeast and the Midwest (North Central). The growing western suburbs developed at higher densities. The combination of these factors accounts for the higher urban densities in the West (Table 2). The effect of the much higher densities of urban cores in the Northeast are offset by the denser suburbs of the West. Indeed, the suburbs of the West are denser than all but seven of the 52 major urban areas. 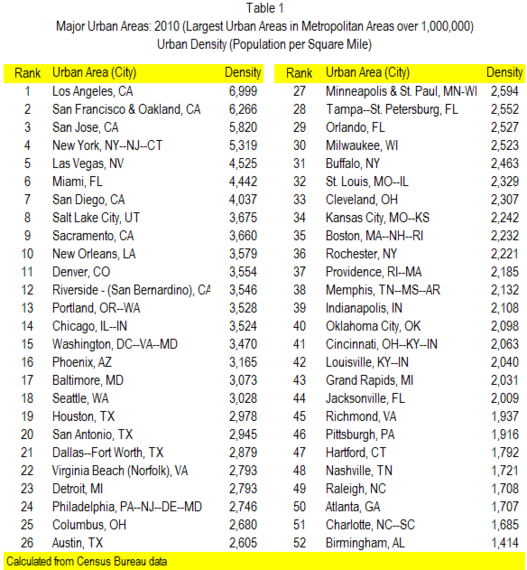 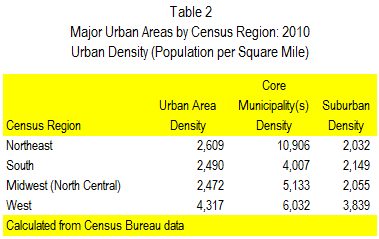