After the Great Recession, which cost millions of Americans their jobs, the U.S. labor market has begun to heal. So far this year the United States has added an average of nearly 230,000 jobs per month. In the 10 years through 2022, the BLS estimates that total employment will grow by more than 15 million jobs, or nearly 11%.

However, the outlook for some occupations is bleak. For example, the number of fallers — logging workers who cut down trees — is expected to decline by 43% between 2012 and 2022, the most of any occupation. Based on Bureau of Labor Statistics (BLS) estimates and projections for more than 1,000 occupations for 2012 and 2022, 24/7 Wall St. identified America’s disappearing jobs.

In many cases, these rapidly declining occupations are already quite rare. For instance, there were just 1,600 locomotive firers — who are responsible for monitoring train tracks and engine instruments — in the U.S. as of 2012. In all, five of the fastest declining occupations had fewer than 10,000 workers in 2012.

Yet, in other instances, occupations that are expected to contract still employ a large number of Americans. There were more than 320,000 people employed as data entry and information processing workers in 2012. There also were nearly half a million postal service workers.

The projected decline in postal service workers is especially significant. In all, the BLS forecasts that the number postal service jobs will fall by 139,000 between 2012 and 2022 — or more than all of the other disappearing occupations put together. A number of factors are expected to contribute to this decline, including continued drops in mail volumes as well as the ongoing financial struggles of the U.S. Postal Service. The USPS has already cut tens of thousands of jobs since 2012, and it is currently slated to cut another 15,000 jobs next year.

Increased automation, digitization, and technological innovation play a role in the decline of several of the fastest shrinking occupations. “We definitely think that technology and automation are a factor with some of these [jobs],” Martin Kohli, chief regional economist at the BLS, told 24/7 Wall St.

International trade can also play a part in the decline of an occupation. Specifically, Kohli identified free trade and imports as factors impacting textile occupations. Trade, Kohli said, “reduces the demand for people to make shoes and textiles in this country, because imported shoes and cloth, often from Asia, cost relatively little.” At the same time, he noted that this allows Americans to focus on other industries, such as high-level manufacturing and providing financial services. Semiconductor processors, too, have become less-common in the U.S., as many businesses have elected to outsource manufacturing work abroad and focus on design, marketing, and distribution.

To determine the jobs with the greatest forecast percentage decline in employment, 24/7 Wall St. reviewed BLS Employment Projections program data for 2012 and 2022. Most of these occupations refer to a specific job. In a few cases — postal service workers, data entry and information processing workers, and textile machine setters, operators, and tenders — we used a broader classification to reflect that multiple jobs in the larger job category would be among the fastest shrinking. Where several occupations were similar in their description, such as textile machine workers and fabric and apparel patternmakers, we selected only one occupation. Employment figures from the BLS for 2012 represent estimates, while figures for 2022 represent forecasts. Median annual wage figures are for 2012. Further information on each occupation came from the BLS’ Occupational Outlook Handbook.

These are America’s Disappearing Jobs: 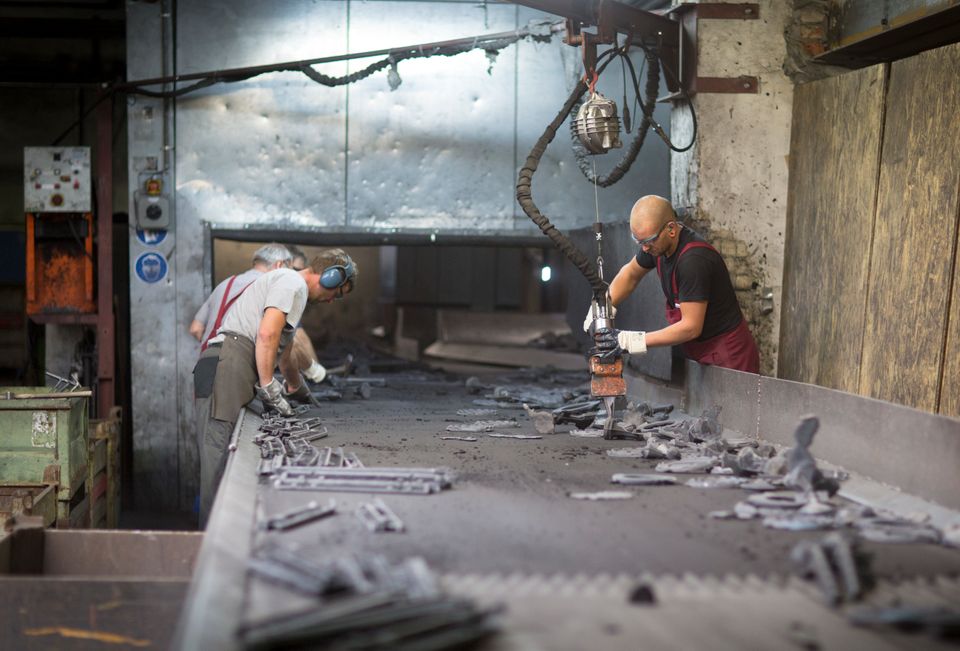 1 / 10
10. Metal and Plastic Drilling and Boring Machine Setters, Operators, and Tenders
> Pct. change in employment 2012 – 2022: -22.5% > Number employed, 2012: 20,900 > Number employed, 2022: 16,200 > Median annual income: $33,940 > Educational qualification: High school diploma Overall, the number of all metal and plastic machine workers is projected to decline by 6% between 2012 and 2022. The decline is expected to be greatest among drilling and boring machine workers, who operate and repair drilling machinery used in plastics and metals manufacturing. The number of such jobs is expected to decline by more than 22%. Foreign competition and especially technological advancement are expected to account for much of the job decline in metals and plastics manufacturing. As a result, workers in the field that can operate and program computer numerically-controlled (CNC) machines are expected to have the most job opportunities going forward. Read more: America’s Disappearing Jobs - 24/7 Wall St. http://247wallst.com/special-report/2014/08/27/americas-disappearing-jobs-2/#ixzz3Bua1SipO Follow us: @247wallst on Twitter | 247wallst on Facebook
Thomas Koehler via Getty Images