It's pretty easy to see in this election cycle that America has hit a new low in stupidity. I like to collectively call it "The Stupid." The acceptance and glorification of ignorance and anti-intellectualism into our political system is one of the most dangerous threats to our country. It stems from the incorporation of religion into our Government by our conservative politicians and media which I wrote about here.

Faith, by definition, means to believe in something without fact or evidence. It is the basis of all religion. Accepting faith is a personal choice and is a private matter for each individual. The danger is when acceptance of information without facts or evidence becomes a way of life for those making decisions for the American people. In short, you can live your life without facts if you want, but don't bring that into the US Government decision making process for Americans.


Denial of facts is lying and it's dangerous when Politicians do it.

If you don't think denial of facts is dangerous, let's review the Iraq war and what happened there. A list of the lies can be found here and here--hundreds of them. George W Bush and his administration were able to sell a war to the American people based on these lies, despite the intelligence coming back explicitly stating Iraq had no WMDs. Denial of this intelligence was crucial to get the Iraq war off the ground. This was used along with the sky high fear from 9/11 to manipulate the US Congress and the American people into believing we were in danger. We were not. And it was sealed with a Jesus told me to do this from George W Bush. The icing on the cake for Conservatives.

As a result we now face some of the greatest terror threats we have ever seen based on those lies in the form of ISIS and other groups that have spawned as a result of the Iraq war.

It can happen again because nothing has changed since then. Something to think about.


It takes some real skill in deceptiveness to deny facts and scientific evidence, but today's GOP does it very well. Despite the fact that 97% of Scientists say Climate Change is real and the US Military has said that Climate Change is a threat to National Security--it is vehemently denied by GOP leaders.

As a matter of fact, there are only 8 republicans out of 278 in this current GOP majority Congress that believe in Climate Change. Chew on that for a minute.

And the people that matter--the ones who lead the Science Committees in Congress--are the worst science deniers of them all. Ted Cruz--the Chair of the Science, Space and Competitiveness Subcommittee recently said: "There should have been warming over the past 15 years...It hasn't happened." It has.

Marco Rubio also a GOP Presidential Candidate and the Chair of National Oceanic and Atmospheric Administration (NOAA) Subcommittee in Congress -- has said on Climate Change "I don't think there's the scientific evidence to justify it". There is.

And they go to great lengths to perpetuate the lies:

It is not a coincidence they are denying facts. They are putting their seat on the throne ahead of the greater good of the American people.

It's not just Science or Climate Change, all facts are denied if it doesn't suit the conservative right agenda 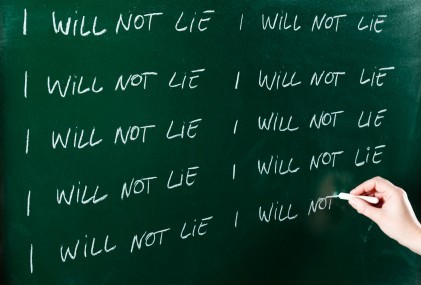 I could write a book about the lies told by GOP candidates this election cycle, here's a few of the more outrageous ones:

Carly Fiorina's whopper at the GOP debates about Planned Parenthood was beyond outrageous. She said, "Watch a fully formed fetus on the table, its heart beating, its legs kicking while someone says, 'We have to keep it alive to harvest its brain.' " A full blown lie, debunked multiple times. Obviously, she was trying to get some Evangelical votes there even if she had to lie and double down on that lie. Religious beliefs won again over facts, it was irresponsible and demonized an institution that is critical to the healthcare of women in need.

Less than one week after the San Bernardino shootings the GOP Congress vote against banning those on the no-fly list from getting a gun. Many republicans, like Jeb Bush cited the late Ted Kennedy being put on the terror list as a reason not to ban everyone on that list from buying guns. The fact of the matter is that Ted Kennedy was never on that list according to the TSA, but you'd never know it, because that lie has been spewed so many times nobody in the media nor have these candidates taken the time to realize it's a lie. And they used this as a key example to rationalize letting terrorists have guns. Oh, but Ted Kennedy wouldn't have been able to buy a gun! Yes, he would have been able to seeing as he wasn't on that list--ever.

This next example left me completely speechless and unable to process any other information for a few minutes:

Ben Carson had a video uncovered by Buzzfeed where he had claimed that he believed the Pyramids in Egypt had been built by Joseph from the Old Testament to store grain. Joseph was quite the handyman according to Ben. Needless to say, there is no dispute by scientists at all that the Pyramids were built as Tombs for Pharaohs, but once again facts are overlooked for belief--a belief that can't be proven.

Bring back the facts

The American Psychological Association published a study that shows that Americans will stand by beliefs even when it is proven that their belief isn't based on or can be proven by any kind of facts. This can be destructive, but that is up to the individual to change or not.

Politicians however, should be held to a higher standard because they make crucial decisions for the American people. It is the responsibility and duty of our elected officials to honor facts over beliefs and opinions and act accordingly--especially when it affects the security and future of this nation. The American people should expect that, and demand it when it doesn't happen. Barack Obama said it best when he said "You can ignore facts but you can't deny the facts." The American people deserve honesty not deception, because that is the American way and it's the right thing to do.

Activist and Writer from Chicago