A defining characteristic of Obamacare is that 34 million individuals will be added to the health insurance system. In fact, a key aspect of the debate surrounding the president's health care initiative is whether, and to what degree, adding the uninsured to the system will drive up the price of health care. An equally fundamental issue with Obamacare, however, is often overlooked: America does not currently have enough physicians! The situation becomes even more alarming when one considers that the U.S. population is expanding. As a result, the American Medical Association projects that by 2025, the U.S. will face a shortage of more than 90,000 physicians.

Under these circumstances proper planning is critical to the future success of the country's health care system, especially as it takes almost 10 years to train a physician. Additionally, the majority of American physicians are opting to become "specialists", when the primary need in the U.S. is for "generalist" physicians. The National Ambulatory Medical Care Survey reveals that from 2009 to 2010 the visits per physician were 30 percent higher for generalists than specialists. (Generalists include physicians in family practice, general practice, internal medicine, and pediatrics; the rest of the physicians are considered specialists). Generalist physicians are in particularly great demand due to the greying of U.S. society. A study conducted by Jack M. Colwill et al.(2008) reveals that while the U.S. population as a whole will increase by 18 percent between 2005 and 2025, the population above age 65 will increase by 73 percent. Those above 65 seek care from generalists at twice the rate of those under age 65. [1]

Figure 1: Percentage of office visits to USMGs and IMGS by patients' primary expected sources of payment 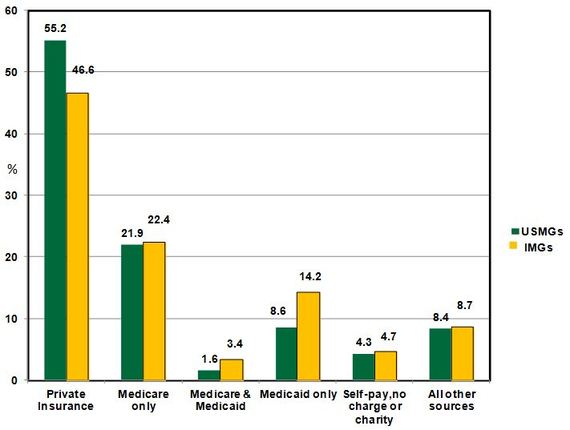 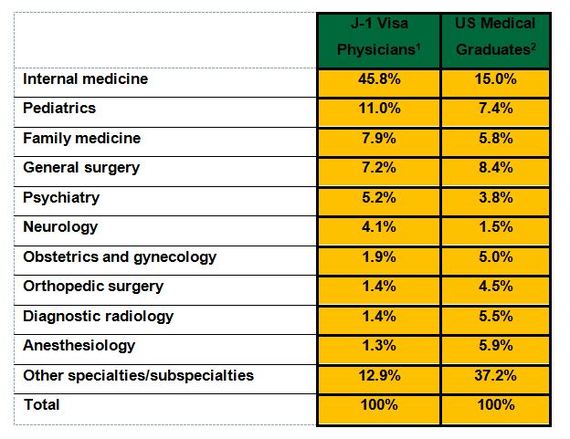 Despite the evidence, few Americans recognize the contributions of IMGs, or more broadly all foreign born physicians, to U.S. healthcare. We as a country should be asking ourselves: What would America have done if these International Medical Graduates never came? Where would our healthcare system be if IMGs and other foreign born physicians were not part of our healthcare system? A report submitted to Congress by the U.S. Department of Health and Human Services stated that the shortage of physicians is exacerbated when a physician faces visa restrictions and is forced to leave the country. Critics of Obamacare, many of whom are also opposed to immigration reform, often ground their opposition on the claim that expanding access will increase the cost of healthcare. However, increasing the pool of foreign born physicians, including IMGs, and thus the overall supply of physicians is an effective means to contain the cost of healthcare. Fixing the broken immigration system to allow more physicians to enter and remain in the country has become essential. America needs foreign born physicians; they are our future doctors.