The U.S. is one of the wealthiest countries in the world, and yet nearly one-quarter of the nation’s residents recently said they had trouble putting food on the table over the past year, according to a survey from the Pew Research Center. That's a unique position among wealthy countries, and more in line with countries like Indonesia and Greece, the latter of which is currently battling rampant unemployment.

By contrast, only about 10 percent of people in countries like Canada and Germany said they had trouble putting food on the table in the last 12 months.

Such slow income growth has helped drive up food insecurity. Indeed, there were 46.2 million Americans living below the poverty line last year, the most in half a century, according to the Census Bureau. And the situation could get worse before it gets better. A House panel voted for cuts in the food stamp program as part of a farm subsidy bill earlier this month, which could put more Americans at risk of hunger.

Only three developed nations -- Chile, Mexico and Turkey -- have higher levels of income inequality than the U.S., according to a report from earlier this year by GlobalPost, an international news service.

If you look at the Pew Research Center's chart, you'll see that the U.S. has a bigger hunger problem than many other less-wealthy countries: 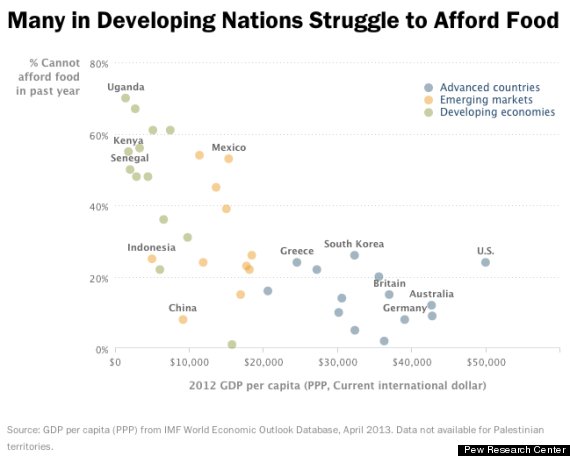