America's cities (metropolitan areas) changed radically since the dawn of World War II. At that point, cities were dominated by their core municipalities (central cities), around which people traveled much greater percentages by transit and lived in much higher densities. Automobile oriented suburbanization had increased rapidly in the 1920s, but was slowed by the economic upheavals of the 1930s.

After World War II, suburban house building expanded and automobile ownership became near universal. Automobile ownership has expanded so much that the percentage of low income workers using cars to get to work is nearly the same as the overall population.

The latest data, for 2011 (from the 2009-2013 American Community Survey) indicates that 15% of the population lives in the urban cores of the 52 major metropolitan areas (those with more than 1 million population). The urban core is defined by urban development and lifestyles similar to those that prevailed before the start of World War II.

The urban core percentage is smaller than may be expected, because it is based on small areas (Zip Code Tabulation Areas or ZCTAs) rather than the much larger core municipalities and other "principal cities" that are often represented as the equivalent of the urban core.

Many central cities, such as Los Angeles, Seattle, Portland, Phoenix, Kansas City, Indianapolis and others have large areas of postwar suburban development, with detached housing and a near monopoly on cars for mobility. Overall, the central cities are 42% urban core and 58 percent suburban and exurban.

The term "principal cities" was coined by the Office of Management and Budget before the 2000 census to recognize that American cities had become polycentric in their employment patterns. All of the formerly designated "central cities" are principal cities, but many additional municipalities were added because of their large, mainly suburban, job counts. Examples include Aurora in the Denver area, Arlington in the Dallas-Fort Worth area, Mesa in the Phoenix area, White Plains in the New York area and Fountain Valley in the Los Angeles area. Principal cities other than central cities have a population that is 8% urban core and 92% suburban and exurban.

The small area analysis classifies ZCTAs as urban core where (1) 20% or more of work trip travel is by transit, walking or cycling, and (2) population densities are 7,500 per square mile or greater. Urban cores also include the large downtowns (central business districts or CBD's) that have job densities of 20,000 per square mile or more (Figure 1). There are five functional urban classifications, ranging from the urban core CBD to the exurbs (Figure 2). 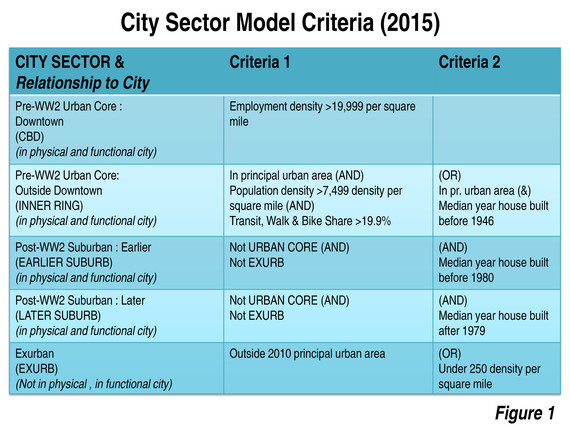 As would be expected, New York has by far the largest urban core, with 10.4 million residents (Table). This densely populated urban core represents the ultimate conception of American urbanization and includes the world's second-largest CBD. This comprises most of the area south of Central Park. New York's urban core stretches well beyond the city of New York to areas of New Jersey, such as Jersey City and Newark as well as to much of the rest of Hudson and Essex counties. However the urban core excludes most of New York City's Staten Island, south of Interstate 278, which looks more like suburbs in New Jersey or Kansas City, for that matter.

Chicago has the second largest urban core, though its population of 2.5 million is somewhat less than that of the city of Chicago, indicating that part of it is suburban.

Despite its reputation for "sprawling," low density suburbs, Los Angeles has the fifth largest urban core, with 1.4 million residents. Many people learn in disbelief that Los Angeles has by far the highest density of any urban area in the nation (area of continuous urban development). Los Angeles is approximately 30% denser than New York, because the suburbs of Los Angeles are so densely populated that they more than compensate for the higher central area densities of Manhattan and the rest of New York City.

Washington also has an urban core much larger than its core municipality. With nearly 1 million residents, Washington's urban core stretches into the Virginia jurisdictions of Arlington and Alexandria and into Montgomery County in Maryland. 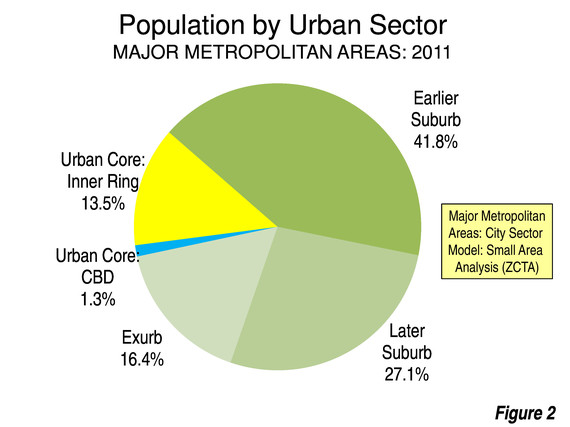 Of course, metropolitan areas without pre-World War II urban cores have the same inner city challenges as those with large urban cores. The difference is simply in their urban forms.

The trend toward greater suburbanization was strong through most of the period between 2000 and 2011, though faltered in the later years, as the economy declined. At the same time, the CBDs were adding population for the first time in decades, which contributed to a net urban core gain of 40,000 new residents between 2000 and 2011. This welcome trend seems likely to continue.

Yet, in context, the CBD gains are small. Between 2000 and 2011, 99.8% of the growth was in the suburbs and exurbs (18.5 million). The latest Census Bureau estimates, just released, show a strengthening of suburban and exurban growth, with rising net domestic migration. With a good economy, there could be favorable prospects for growth in the entire city, from the urban core, through the suburbs to the exurbs. 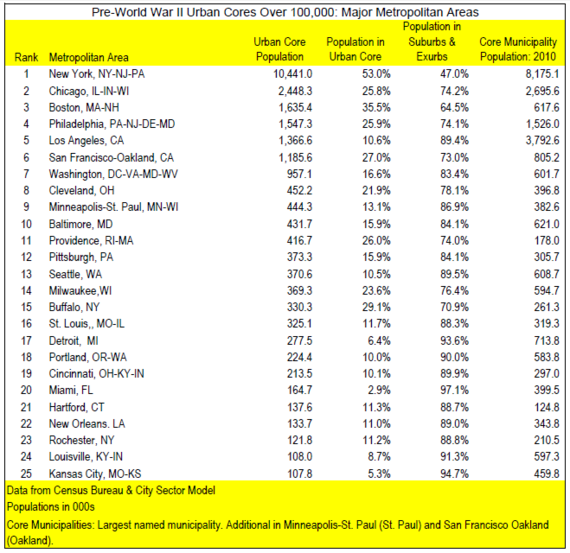