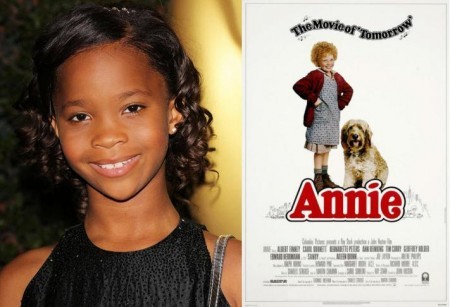 "America eats its babies. No matter what y'all think about me, I'm still your child."
--Tupac Sakur

Black children are presently under continual assault by well-maintained practices of white racial domination and exclusion, resulting in the marginalization of Africans and African Americans into adulthood. These children are under attack physically, psychologically and emotionally from the classroom to the movie screen and everything in between. Black children are being unjustly singled out and tormented; while some are denigrated and crucified in the media, others are shot in cold blood for merely wearing a hoodie or listening to loud music. The most recent psychological offense against a black child occurred when the Oscar-nominated actress Quvenzhané Wallis was announced to play the lead role in the remake of the Broadway hit Annie. This time the popular character would be played by a young black actress, to the exasperation of many whites. Similar controversy has erupted over such fictional characters in Hollywood before. From the backlash against the decision to cast the black actor Michael B. Jordan in the role of Johnny Storm in the new Fantastic Four movie to the white hysteria over casting Amandla Stenberg, a young black actress, as the character Rue in the first installment of The Hunger Games, white America regularly demonstrates its discomfort with the black presence in Hollywood and mass media in general.

Historically, black children were not exempt from white disenfranchisement, as they were anthropometrically measured and classified in the racist frameworks about the origins of humankind, which ranked persons in order of supposed "intelligence" and other imposed attributes, in much the way same as black adults. Early images of and writings about black children referring to them as "pickaninnies," as they were once called, were well-established throughout the 19th and early 20th century and served to reinforce the psychology of white supremacy by reducing black children to caricatures and objects of amusement. It is no surprise, then, that the mere mention of black folk visually, geographically, professionally or otherwise in historically white institutions constitutes a threat to the established order of things for those white people who cannot imagine life beyond their own personal sense of self despite the presumption of a shared democracy. This is one reason that black youth are often portrayed as savages, animal-like menaces to society with a craving for mischief. Black children and other children of color, then, rarely find themselves in white media (film, TV) unless portrayed as less-than-productive members of society.

White children have abundant options and choices to see themselves broadly and positively represented in film, popular music, young-adult novels and other forms of media created by people who look like them. In particular, young white girls have an increasing number of affirming characters to witness, such as Katniss Everdeen in The Hunger Games and Beatrice Prior in the Divergent series (whose film adaptation is coming soon). But black children are not so fortunate. A recent study by Nicole Martins and Kristen Harrison found that exposure to electronic media in long stretches can lower a child's self-esteem, especially if the child is a white girl, a black girl or a black boy. This is especially concerning given that black children watch about 10 more hours of television per week than any other group. The amount of time exposed to the hegemonic forces of white media and its often-destructive content regarding black people and their children is toxic for their emotional health and physical well-being, as blacks are made to internalize the deleterious messages that they receive daily, reminding them that they do not matter much in the world. Being rendered visible yet invisible induces "psychic violence" on black youth, limiting their ability and capacity to dream of life beyond the confines of white racial stereotypes about their life chances.

As black children grow into adulthood, they become potential competitors with the white status quo for jobs and other resource-generating opportunities, making it easier to justify their exclusion through violent and repressive means. The racist framing of black children by whites, blacks and others continues presently, informing school discipline policies that leave black youth vulnerable to the whims of the criminal justice system. Young black men are statistically more likely to be suspended from school than their white classmates, setting them up for a catastrophic cycle of intergenerational poverty, despondency and a general lack of trust.

Guided by white racial knowledge and inheritance, many white teachers use what they have learned through intergenerational transmission of racist images, stories, conversations, and causal discourse about African Americans in society. If a schoolteachers are white and come from predominately middle-class enclaves, as research suggests that they do, then it can be assumed that many have very little contact or sustained interaction with the black community. Instead of operating from democratic impulses, they act from xenophobic inclinations, viewing black persons in enduringly hostile ways. It should be no surprise, then, that under these undemocratic and racist circumstances, black males are disciplined and harshly punished more for what they represent in the popular imagination than for what they actually do. It is no accident that African Americans (amongst other groups of color) occupy the lower rungs in society, given the legacy that white colonialism and oppression has had on the lives of black Americans over the last 350 years.

The frustration that most black Americans feel over everyday forms of racism can and often does cause emotional stress, anger and even self-hatred. We live in a racist society where black youth are routinely shamed by whites and other groups for their own inherited circumstances in life. Both Wallis and Stenberg are no strangers to racism, having been violently attacked through the media. During the Oscars in February 2013, satirical news outlet The Onion sent out a controversial tweet referring to Wallis as a "cunt." Though this drew instant backlash and public ridicule, the very same public is now crazed over her recent casting in place of a redheaded, freckled-faced white girl to play a fictional character. Stenberg was called a "black bitch" and other horrifying epithets as an onslaught of fans expressed their regret for having cried over the death of what they later learned to be a black child.

Wounds like these are deeply etched in the collective memories of black people and have pernicious effects on health, which can linger for generations. The self-concept of black girls are uniformly shaped by what they glean from white U.S. media, which typically consists of debasing characterizations and unrealistic comparisons to white-female-normative standards of beauty and womanhood. In contrast, black boys and young men of color are typically depicted as the thug, the gang banger, the token black person, the comic relief, the ladies' man, the athlete/dancer, the absentee father or, most damagingly, the violent and angry black man destined for a showdown with the criminal justice system.

America doesn't care about black youth (especially boys and young men of color, whom they fear). This is evident in the way schooling is unequally funded, pushing poor black and brown children out. The most nefarious of abuses to blacks occurs in public education, as they are deprived of the opportunity to be educated on their terms in ways that foster success, which begins with healthy racial identity development and positive affirmation that blackness matters. White America has consistently put up the middle finger to black children through halfhearted policy measures that have done very little to alter the footprint of our nation's past as it pertains to black children. To love black children means to embrace them as your own while recognizing their unique challenges -- through no fault of their own -- in a color-conscious society where racism remains foundational to the American experience.