The world's first report on measuring the value of LGBT workplace diversity in dollar terms is about to be released.

The new report, "LGBT Diversity: Show Me the Business Case," reveals that companies that bother to invest resources in making workplaces more welcoming and comfortable for lesbian, gay, bisexual and transgender staff can realize big returns, from increasing productivity to reducing exits by LGBT staff who feel uncomfortable.

In the UK this is a big issue, and as you will see below, it is also a major issue in the U.S.

It costs a lot to replace lost staff, so this new report is timely -- and important -- for American business.

This latest pre-release data for the U.S. from the largest global LGBT research initiative, LGBT2020, reveals what life in 2014 is like for LGBT Americans at work.

And, unfortunately, the news from the U.S. workplace is not that good. 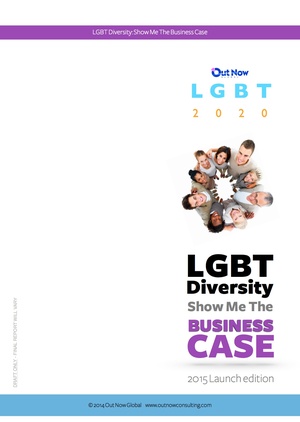 Sometimes progress is hard to judge when we only have our own experiences to measure against. Life can seem fine or rather bleak, depending on what happens in our daily lives.

Learning from others' experiences is incredibly insightful -- and empowering.

It may surprise you, for example, to learn that 9 percent of respondents to the U.S. LGBT2020 research sample reported that they have been refused goods or services in the past 12 months because they were perceived to to be lesbian, gay, bisexual or transgender.

Four out of every 10 respondents (40 percent) were verbally abused at least once last year for being LGBT.

And one in every six respondents (16 percent) was harassed at work. To put that into perspective, America is home to more than 15 million LGBT people, with more than 10 million who are currently working full-time -- and almost 2.5 million LGBT Americans personally experienced harassment at work last year.

But here is the worst part: The number of LGBT Americans who feel able to be out to everyone at work has gone down in the two years since Out Now's last U.S. LGBT2020 sample and is now down to just 38 percent.

When we look at some of the insults being made in U.S. workplaces listed below, we start to understand why that number has fallen so low.

The new report highlights new market data from 10 countries around the world.

Fewer than one in five LGBT workers in the U.S. (18 percent) agrees with the statement "This is a workplace entirely free from homophobia."

One of the key differences between the UK and U.S. samples in the LGBT2020 research is the far greater mentioning of religion that American respondents report.

Darren Cooper, a senior consultant with Out Now who is based in London, said the new U.S. results surprised him.

"In the UK we consider that religion has no practical place at work," Cooper says. "These latest findings from our LGBT2020 study for the U.S. show a vastly different situation to the UK. In the U.S. people feel much less able to be out with all their work colleagues, are more likely to have witnessed anti-LGBT remarks at work and, worryingly, have the added pressure of colleagues using religion to justify making insulting remarks. Many of these types of remarks would cause an outcry if they happened in a UK workplace."

Cooper cited as just one example the short but powerful remark made to a lesbian respondent: "I am praying for you."

"That comment is incredibly loaded, as it suggests the person that said it is a 'good' person, with the implication that the person being spoken to is 'bad' or 'wrong' in some way. These findings show there is an enormous amount of work still to do, around religion and also general workplace acceptance of LGBT people as equally respected employees in America's workplaces."

It is not all bad news, though. Happily, some respondents -- a small minority, it must be admitted -- chose to comment positively on their workplaces.

Here are some of their remarks:

The 10 Worst Anti-LGBT Work Insults in the U.S.

We have left out of the list below numerous examples of people reporting what they saw as "normal" workplace banter, such as "That's so gay," "f*ggot" and various other examples of name calling.

These are just 10 of the hundreds of comments made to this year's LGBT2020 research by U.S. respondents, who chose to write -- in their own words -- what is happening right now in their workplaces.

"Room for improvement" is an understatement.

Out Now will be presenting key findings from this new report in a "Global Series" workshop at the 16th Out & Equal Workplace Summit in San Francisco at Moscone West Convention Center on Thursday, Nov. 6.

To request a free copy of the new "LGBT Diversity: Show Me the Business Case" report, just fill in this form and Out Now will send you a copy when released.