CONCLUSION: When Finland and Hungry beat out the United States of America in download speeds and the Republic of Seychelles and Bangladesh beat us in 'upload' speeds, (the critical component in the entire 'using the cloud' ecosystem), you know something is wrong with broadband in America today.

We use two sources: Akamai's 4th quarter 2014 results and Ookla's Net Index, March 31st, 2015, for broadband connectivity around the world.

NOTE: These numbers can vary by day as the Ookla speed test has "5 million tests per day" with "350 million users in the past year".

Click for the Net Index showing broadband speeds worldwide and other information.

This exhibit is for the Americas countries' speeds, 4th quarter, 2014. The only good news from this chart is that the United States beat out many of the South American countries.

Requires registration to get the report. 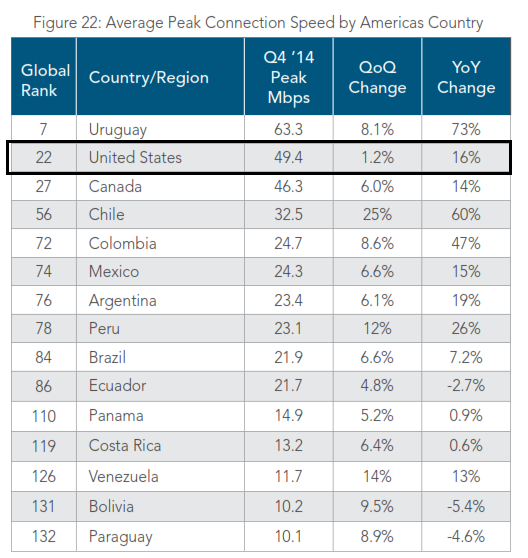 Both sets of data have some bias and there are a host of issues that make their statistics different. Akamai uses the broadband traffic over their own networks vs Ookla, which is based on residential speed-tests where the person chooses whether to test their speed -- i.e., the speeds tests are 'self-selecting'. And, some companies have started to offer much faster services in selected regions or cities, such as Google, with a 1 gigabit speed service, (1 Gbps equals 1000 Mbps). When averaged with the other speed tests, it skews the data a bit. These are but a few of the issues.

Just to show you the differences in the findings from these two companies, or to make you feel even more depressed about America's broadband capabilities, I give you the Top 10 countries, though with a few caveats. 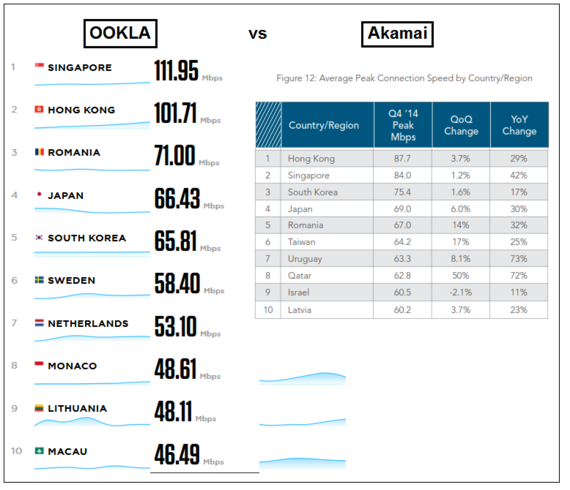 One simple reason there is a discrepancy is that the data we use for Akamai was created at the end of 2014, vs Ookla's speed test, which was done on March 31, 2015. However, it may or may not account for some of these differences.

The speed of Ookla's listings are much higher than Akamai's for the same country.

For example, Singapore is clocked at 111.95 Mbps by Ookla, making it Number 1 vs 84 Mbps for Singapore by Akamai, and listed as Number 2.

Tech experts could explain the differences and nuances of the methodologies the companies use in their accounting. But the bottom line -- Ookla's speeds are usually higher than Akamai's calculations.

Telco and Cable Pundits are in Denial.

America is not in the Top 10 in the world in broadband in either case.

The executives and pundits for the phone and cable companies keep telling us that we are Number 1 in broadband, quoting this metric or that metric. It is a shame these people are in denial. The most common excuse is that these other countries are smaller so it is easier to provide higher speeds to a smaller location.

This is all easy to refute.

Verizon New Jersey is the state-based utility that covers almost all of New Jersey -- and it is smaller than most of these countries. Starting in 1993, Verizon NJ was supposed to have their entire territory upgraded 100% by 2010, replacing the aging copper wire of the state utility with a fiber optic wire that could deliver at least 45 Mbps in both directions. State laws were changed that gave Verizon massive financial incentives, read phone service rate increases and tax perks, to do these upgrades and bring this fiber optic future.

And though it varies by state, the upgrading of America was supposed to be happening in every state. From California to Pennsylvania, customers paid billions to the state telecommunications utility to have some, if not all of their territory rewired with a fiber optic wire that would connect homes and offices, as well as schools and libraries.

For example, by the end of 2015, Verizon Pennsylvania is supposed to have 100% of their territory upgraded to offer broadband, including rural, urban and suburban areas. And these commitments span decades. Pacific Bell (now AT&T California) was to spend $16 billion from 1993-2000 to pay for 5.5 million households to be upgraded to fiber optics. More to the point, in both cases state laws were changed to give these companies more money for construction, though it just turned into profits as the networks were never deployed. AT&T California first rolled out DSL over the old existing copper wire around 1998, then U-Verse, around 2006, which is a copper-to-the-home service that uses the same, exact, legacy copper networks that were to be replaced with fiber optics.

Where are these new fiber optic-based networks that we all paid for? This is the truth about broadband in America and reason we are not Number 1 or 2 or 7 or even 12 in the world in broadband.

READ MORE: To understand how these speed tests are conducted and what other resources are available, or more importantly, to learn how America ended up 22nd
or 25th or 40th in the world in broadband download and upload speeds, see:

This new book is now available in paperback and for Kindle.