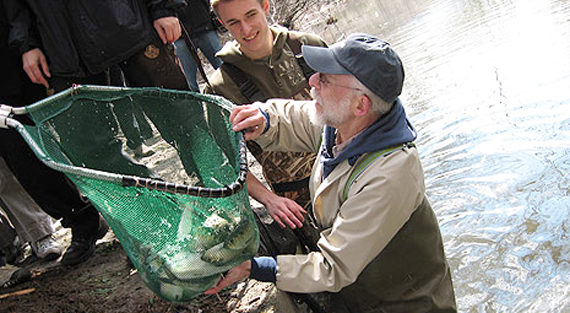 Dr. Joseph Rachlin inspects a net full of herring before releasing them into the Bronx River. Photo: Paula Gore, via Lehman College.

American journalist Charles Kuralt wrote in A Life on the Road:

I started out thinking of America as highways and state lines. As I got to know it better, I began to think of it as rivers. Most of what I love about the country is a gift of the rivers: birchbark canoes and cottonwood pirogues; steamboats and trading scows; Huckleberry Finn, Mike Fink and Evangeline; blue herons, bald eagles and snowy egrets; the Grand Canyon and the Hudson Palisades.

He concluded the book's chapter, Down by the Riverside, with his oft cited quote, "America is a great story and there is a river on every page of it."

There are 3.5 million miles of rivers and streams in the U.S. Add to that our estuaries, bayous, bays, lakes, wetlands and the 95,471-mile coastline that defines most of our national boundary. Embodied therein is the stuff of any core curriculum: history, literature, economics, arts and the natural, formal and social sciences.

Why don't more schools use their local waterway as a living classroom and laboratory?

The cost of regularly transporting students is a familiar obstacle. Many schools operate with limited transportation budgets. But even if that funding were not an issue, the more thorny question is whether such study would meet state and federal education requirements. Almost any public school teacher who aspired to build a curriculum around an American river would have to wrestle with that conundrum.

But let us be optimistic about those challenges for a moment. Once at the water's edge, what is a teacher to do?

Last week I reported on the partnership of Pace University School of Education, the New York Harbor Foundation and seven other institutions in a creative and ambitious STEM collaboration, funded by the National Science Foundation, that aims to restore New York Harbor using hundreds of trained teachers and thousands of city school children in the Billion Oyster Project.

Granted, not every school can qualify for large outside funding. Fortunately, all across the nation, indefatigable teachers are willing to lead the way with intellect, passion, and creativity, even where resources are limited. In future posts, I will profile some of the institutions and individuals who are connecting American education to American waterways -- feel free to contact me with tips.

One such educator is Professor Joseph Rachlin, director of the Laboratory for Marine and Estuarine Research at CUNY's Lehman College, who will be the recipient of the Great Work Award, the highest honor bestowed by the Environmental Consortium of Colleges and Universities.

"Get students and teachers involved in your research. They will become the next generation of stewards and advocates." ~ Joseph Rachlin

Dr. Rachlin is an aquatic ecologist who has been training new generations of researchers and teachers for most of his 48-year career. Raised a city kid, he has built an international reputation for his work on the urban streams of New York City, rarely straying from his birthplace of Bronx, NY.

He has worked with some of the best assets a scientist can muster, and he has had to learn to get by. When resources were limited, he strengthened his commitment to making a living classroom and laboratory of New York's famously impaired waters:

From 1970 - 1992, the greatest extent of my research, with my students, was in the New York Bight and the Hudson Estuary. This was primarily because I had available to me a research vessel charted through the CUNY Institute of Marine and Atmospheric Sciences. When we lost our ability to continue with a ship charter, due to New York State budget constraints, I shifted my research activities to the local waters of the City: the Bronx River, Saw Mill River, and East River. These systems became teaching laboratories for my undergraduate and graduate students.

Amtrak bridge over the Bronx River. Photo: Jim.henderson (Own work) via Wikimedia Commons

Like most of the resourceful, urban educators I have met, Dr. Rachlin sees himself in his students. He enables them to find the treasures buried in the urban landscape - a talent he developed during his young years coming up in the city:

Growing up in the West Farms section of the Bronx, we always used to trap crayfish below the falls at 181st street, and we kids always fished for carp in the Bronx River as it flowed through what was then a vacant lot behind the RKO Chester movie house. This site is now Drew Gardens. These experiences along with living within walking distance to the Bronx Zoo, which my brother and I visited every weekend with my father, cemented a strong interest in animal biology and especially the aquatic world.

His training at the fishery science program of New York University drew him to applied biology. He came of age as a scientist during the national conversation launched by Rachel Caron's Silent Spring. As did Carson, he sees the global in the local, a quality of a first-rate teacher and researcher:

I became interested in the Saw Mill River and the question of carefully examining its freshwater reaches for species common also to the upper freshwater section of the Bronx River near its source at Davis Brook . . . These rivers are a model system since they and their freshwater populations have been separated for some 17,500 years. Is this sufficient time for these isolated populations to, through genetic drift, begin to show incipient speciation?

Even as he explores profound ecological questions in his neglected urban streams, Dr. Rachlin is compelled to meet his responsibility to the next generation:

I also used the Bronx River as a model system to train teachers of the New York City School system on how to conduct field research with their students. Towards that end, I and my colleagues, Barbara E. Warkentine and Antonios Pappantoniou, developed and self-published an Educator's Guide to Riverine Studies with Special Reference to the Bronx River and its Fish Fauna, which we freely distributed to the teachers during our workshops.

I asked him what lesson a long career has yielded:

The most important lesson I have learned is that it is vital to get students and, where possible, teachers involved in your research. And to be as passionate as possible about what you do. If you can get them to realize the value of the aquatic systems - the Hudson River, Bronx River, Saw Mill River, and East River around New York -- they will become the next generation of stewards and advocates.

Everyone is welcome to the annual conference of the Environmental Consortium of Colleges & Universities, November 6-7, at Vassar College in Poughkeepsie, NY, where Dr. Rachlin will be honored.

This post appears on EarthDesk, the blog of Pace University's Dyson College Institute for Sustainability and the Environment.