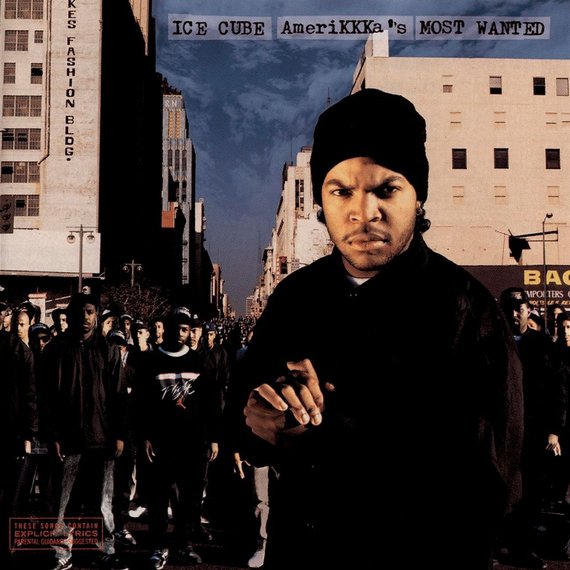 Before his 21st birthday, Ice Cube released his debut solo album after his split from the group, NWA entitled Amerikkka's Most Wanted in 1990.

To put things in a very honest perspective, the album describes many aspects of American society, not only then, but now. Do not come at me saying that there are plenty of similar albums. I know this, the message and title of this such album just stands out.

The album was filled with tons of politically charged references, misogynic and violent lyrics but it needed to be heard; society should put this album on repeat. The impact of Cube's hardcore flow can still be felt in the homes, streets and prisons of America.

Track two, "The N***a You Love To Hate", Ice Cube blasts the police and the government. He warns police that one day blacks that feel oppressed might find it in them to retaliate, which has subsequently happened. He rips the gun control laws, one that banned the legal use of the oft-owned and very cheap but high-powered AK47 rifle. Politicians would use the banning of the guns that were at the center of street violence as a platform for election.

Then came one of the more recognizable and relatable lines from the entire album: "Why more n****s in the pen than in college?", the school to prison pipeline is very much alive as there are more black men sitting in America's prisons than in America's universities.

The zero tolerance-esque policy neglects young black children who may be in need of more assistance and guidance to keep them out of trouble, therefore prioritizing incarceration over education. The American Civil Liberties Union further characterizes the issue that begins at the heart of the size of the classroom, they are overcrowded without resources to fundamentally nurture a child's educational needs such as the lack of quality teachers and funding for extra opportunities such as counselors and programs to aid these at-risk children. These faults have caused things such as the frequency of school shootings and other publicized happenings which lead schools to embrace the aforementioned zero-tolerance policies that can cause expulsion for students regardless of the offense. Expulsions lead to unsupervised children which lead to inevitable trouble, which lead children into court, deep into the juvenile system. These factors and others lead children-turned-adults behind steel bars instead of behind wooden desks. To a place where a pencil doesn't write your essays, instead, it can help write your tombstone.

What about the track, "Turn off the Radio"? Cube had a message for those blacks who wish to assimilate themselves with who he deemed as the enemy, saying that they simply don't care much for you. He labeled those people "Oreo cookies". The first 30 seconds or so is filled with stereotypes associated with African-Americans, mocking and labelling us as people who love fried chicken that can't do anything but play a sport, a place where we are generally wanted, before telling us that we should "go back to Africa," because we aren't truly wanted as people in this country as Cube is trying to explain. Outside of that, he used this track to come for "sellouts," calling them people whose only goal is to make songs to please the mass audience, upset that his truly radio-unfriendly music doesn't get radio play. Actually, the album was without a true single and significant radio attention.

The next track "Endangered Species (Tales From the Darkside)" is the epitome of the many societal struggles we are currently living through everyday it seems, police killing blacks, innocent blacks. The female news reporter starts out by letting us know that the new animal seeming to be falling from the face of the Earth are black people, young black teenagers as she described have become the newest members on the list. The accuracy. "No efforts have been made to preserve the blacks," she continues, saying that the aforementioned people make for good "game hunting." Police brutality is not a new thing, it has been around since the inception of police. It was put on national display two years later after the beating of Rodney King in Los Angeles which became the culprit of the riots that occurred in the city later that year. Years afterwards black Americans remain on the list with obviously no laws to protect us from the badged game hunters. Just another tale from the Darkside.

I can go on and on about how the life of 20-year-old O'Shea Jackson, aka Ice Cube was similar to every other 20-year-old black man in Amerikkka, I mean, America. The lessons he learned and the messages he portrayed exhibited on this album can still be heard today. Twenty-five years later not much has seemed to change about this avenue of society, discrepancies over color are very much alive.

Ice Cube was ahead of his time.