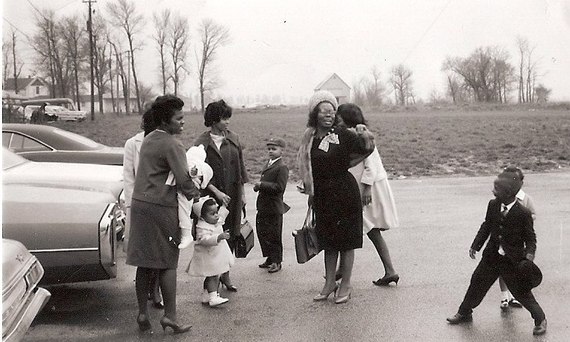 John Fountain (right corner) as a little boy playing during a family dinner outing, circa 1960s.

We stood at the front door in a circle, holding hands--a dozen or so children, watched over by my Aunt Mary, like a mother hen.

This was our morning ritual on schooldays after a hot bowl of oatmeal, buttered cinnamon toast and fruit juice.

"May the Lord watch," one of us led the prayer as the chorus of mostly cousins repeated in near perfect unison.

We had to do homework, take naps, read the scriptures
--Aunt Mary's recipe for success.

After prayer, we hurried out the door of Aunt Mary's house as she inspected us for the proper attire or greased our ashen faces with Vaseline.

"Put your gloves on..." she would say to one. "Where's your hat?" she would ask another.

We were mostly good, especially since back then, on our trip to and from school, we were bound to encounter somebody's mama or grandmother, father, uncle or some other adult who we swore were spies for Aunt Mary and our parents.

In fact, if, in the words of Aunt Mary, you "went to school and acted a fool," the news always managed to beat you home. And you could count on Aunt Mary showing you the error of your ways by use of the scripture and the strap.

Aunt Mary is my mother's eldest sister--bossy back then to us kids but also as sweet as her syrupy Kool-Aid. She was the babysitter, the one who kept us cousins while our parents worked.

She was a fierce Bible believer and demanded that we memorize scriptures, pray, and say grace before we touched one morsel of food.

She had the backing of the Lord, we presumed, the blessing and confidence of our parents. Our teachers--and it seemed at the time every other adult were coconspirators.

When we arrived at Roswell B. Mason School each morning, there were more rituals: the Pledge of Allegiance, prayer and also a paddling by principal or teacher for those who dared to disobey or sass. Back then we still came home for lunch. Sometimes we arrived to the smell of sloppy Joes, at other times, to the less tantalizing scent of tuna casserole, which I hated.

But that didn't matter to Aunt Mary.

Back then, a kid ate what was put in front of them. And you watched whatever was playing on the television.

On mornings in Chicago, it was Ray Rayner and Garfield Goose, Romper Room. At lunchtime, it was Bozo's Circus as we gazed with visions of someday playing the Grand Prize Game. After school, we watched Felix the Cat, Speed Racer or the Chicago Cubs.

We had to do homework, take naps, read the scriptures--Aunt Mary's recipe for success.

"Remember now thy creator, in the days of thy youth, while the evil days come not, nor the years draw nigh, when thou shalt say, I have no pleasure in them," I can still hear Aunt Mary breathing Ecclesiastes 12:1 with thunder and conviction.

The evil days did arrive--somewhere after the days when life was simpler and plain and our neighborhoods, even the poorest of them, were more filled with a sense of community than with chaos.

They arrived sometime after the time when, even in their imperfection, families were functional and provided the children with a sense of order, discipline, respect and reverence rather than with disorder, disregard, disrespect and irreverence.

In my search for an antidote, I cannot help but recall my schooldays and those lessons of old that still are as good as gold. Just like my dear Aunt Mary.