At a time when most nations are trying to figure out how to stop Syrian dictator Bashar al-Assad from killing his own people in a year-long struggle to stay in power, the Venezuelan government is helping to prop him up.

The facts and figures coming out of Syria are grisly, with more than 9,000 dead since last spring. On an average day, 50 citizens are shot and killed by government security forces. Bridges and roads out of the country are blown up, preventing civilians from fleeing. Doctors are ordered to tranquilize torture victims so that they cannot speak to international observers. Journalists are assassinated. Children and women are slaughtered. Assad's is a historically bad regime, committing undeniable crimes against humanity.

Bashar's barbarism cannot be overstated. Together with his father Hafez's bloody regime, Syria has seen 41 years of Assad family rule. This puts the father-son duo in North Korea and Cuba territory for longest dynastic dictatorship.

It comes as a shock, then, to see this New York Times headline: "As Others Isolate Syria, Chávez Ships Fuel to It." And another stunner, from Reuters: "Venezuela to ship more fuel to Syria as crackdown spreads." 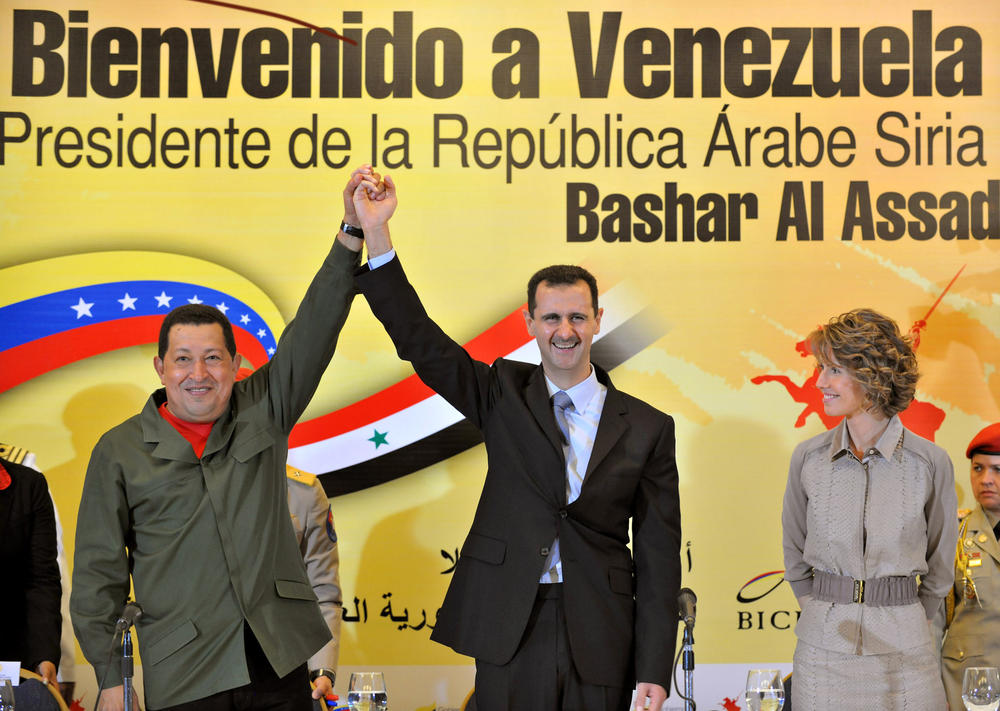 Grotesquely, even as Assad has intensified his repression, the Venezuelan government has provided him with the supplies he needs to keep his military machine strong and deadly. Even as other nations have boycotted selling fuel to Syria on human rights grounds, Venezuela persists, having sent more than 600,000 barrels of oil in the past few months.

A country like Russia, with economic and strategic investments in Syria, is expected to side with Assad, as are other states with no moral compass beyond national interests. Yet, even some of these nations, like Saudi Arabia, are now calling for Assad to stop the slaughter.

Meanwhile in Venezuela, Hugo Chávez's party has unanimously approved a measure of solidarity with the Syrian regime, hailing its so-called reforms and praising it as a role model. Correo del Orinoco, a state-funded paper, continues to publish pro-Assad commentary. And the president and his cabinet have, on numerous occasions, publicly and fiercely defended the fuel shipments and given their "strongest support" to the Syrian tyrant.

Chávez's loyalty to Assad -- being tested to the extreme now -- is not a new development, as the leaders have enjoyed close ties for years. Chávez has visited Syria twice in his presidential capacity, and on the latest trip, Assad re-named a street in Damascus in his honor. When addressing the Venezuelan public, Chávez often refers to Assad as "our brother." In 2010, he hosted Assad's first stop on his South American tour, an event praised to the heavens by American-born Eva Golinger, Chavez's chief propagandist, and recapped at length by Syria's official state news agency. Their conclusion -- that stronger Syria-Venezuela ties would "guarantee a free and democratic world where peace and respect prevail" -- stands today as painfully ironic.

Inside Venezuela, more than one million citizens are of Syrian descent. Many of them have recently taken to the streets of Caracas to rally against Chávez's support of Assad. Such public protest is risky business. As Al Jazeera has recently reported, local Syrian diplomats note who gets involved, and when those individuals return to the Damascus airport, they can become targets of the police state. But with their families being gradually destroyed, these protestors are growing louder.

Why is Chávez so willing to support such a global pariah, risking credibility abroad and even instability at home? Some point to a 2010 agreement wherein Venezuela trades diesel for Syrian food. This accord does not accomplish much from a strategic or economic point of view, but has aided Chávez in his quest for photo-ops with leaders of the world's worst governments. His antics have been the same with Iran, Zimbabwe, and Qaddafi's Libya. It is all evidence of Chávez's remarkable track record of admiration for serial rights abusers.

The Venezuelan leader himself argues that the uprising in Syria is a Western conspiracy, not an organic rebellion. Last spring, he even painted Assad as the victim, claiming that "terrorists are being infiltrated into Syria and producing violence and death," and accusing the international media of jumping to the conclusion "once again" that "the guilty one is the president."

His own bizarre reasoning aside, the reality is that Chávez simply doesn't give a damn about human suffering in Syria. In a recent interview with the New York Times, his minister of oil and mining Rafael Ramírez explained Venezuela's support of the criminal Syrian regime: "If they need diesel and we can supply it, there is no reason not to do it."

This isn't blindness or ignorance, as Chávez's intelligence informs him of what is happening in Syria. Rather, this seems to be intransigence. As one of his critics so incisively observed, Chávez doesn't just go to the cemetery with his friends -- he buries himself with them. With his own elections approaching in October, and with the Venezuelan people growing increasingly confused by his support for a murderous despot, this may turn out to be the case.

Thor Halvorssen is president of the Human Rights Foundation and founder of the Oslo Freedom Forum. Alex Gladstein is OFF's vice president of strategy.